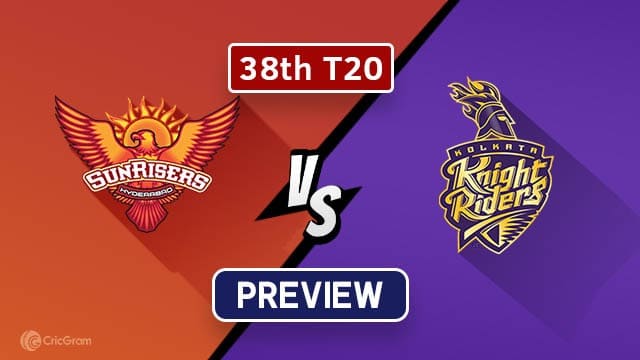 The 38th Match of Indian Premier League 2019 will be played between Sunrisers Hyderabad and Kolkata Knight Riders. We are covering SRH vs KKR Dream11 Team Prediction, Preview and Probable Playing XI for the T20 match. The match is to be played at Rajiv Gandhi International Cricket Stadium in Hyderabad.

Sunrisers Hyderabad are fifth on points table with four wins and four losses. They finally got a victory after three consecutive losses and will hope to continue the winning momentum ahead. They defeated CSK by 6 wickets. Bowling first, Rashid Khan along with pace trio of Bhuvi-Khaleel-Shankar bowled well to restrict Chennai at 132 runs. Rashid took two crucial wickets. Chasing the target, In-form Openers Warner and Bairstow made a match-winning opening stand scoring 50 and 61* respectively to ensure easy chase of target. Sunrisers Hyderabad will aim to take revenge from KKR for previous loss and improve their standing in points table.

Kolkata Knight Riders are sixth on points table with four wins and five losses. They have lost four consecutive matches and nned to get back into winning ways very soon. They lost their last match against RCB by 10 runs. Bowling first, Russell and Narine were the only positives in an otherwise poor bowling display taking one wicket each to restrict RCB at 213. Chasing the target, Top-order collapsed miserably but Nitish Rana and Andre Russell played attacking knocks of 85* and 65 respectively to take team to a total of 203 and were left behind by just 10 runs. Kolkata Knight Riders will hope to end their win drought tomorrow defeating SRH and get some much-needed momentum.

Pitch will support spinners and an average total near 150 can be expected.

Anyone among Shahbaz Nadeem and Abhishek Sharma can play.

Vijay Shankar will play the role of an allrounder. Rashid and Bhuvi can also do big hitting.

Bhuvneshwar, Sandeep Sharma and Khaleel Ahmed will be the key pacers along with Vijay Shankar.

Andre Russell and Sunil Narine will play the role of an all-rounder.

Kuldeep Yadav, Piyush Chawla and Sunil Narine will be the key spinners. Kuldeep has been expensive in IPL’19 but is likely to continue. Nitish Rana can also bowl few overs of spin.

Andre Russell and Harry Gurney/Matt Kelly will be the key pacers along with Prasidh Krishna. Prasidh Krishna has failed to make a mark in IPL’19 and Sandeep Warrier can take his place in the playing XI.

They can shuffle their batting order as per the demand of the situation.

If you liked SRH vs KKR Dream11 prediction, then follow us on Twitter for Latest Cricket News.