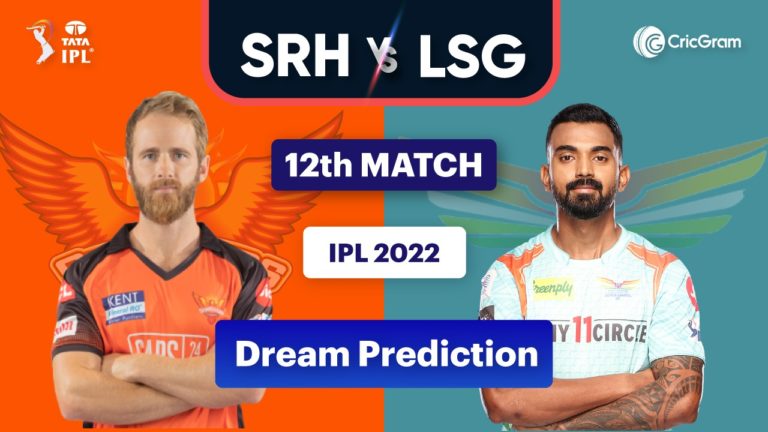 SRH vs LKN Dream11 Prediction, Probable Playing 11, and Fantasy Cricket Tips. Sunrisers Hyderabad vs Lucknow Super Giants will play in the 12th match of the IPL 2022 at the Dr DY Patil Sports Academy.

SRH has started their campaign with a loss against RR in their first game. They were completely outplayed in all the departments. They will hope for better performance from both bat and ball in this game.

Opting to bowl first, they leaked a lot of runs in the powerplay and also gave away many extras. Urman Malik and T Natarajan picked up 2 wickets each but were expensive.

With the bat, chasing 211, their top order was dismissed in single digits. Aiden Markram was their top scorer and played a brilliant knock of 57 runs. Romario Shepherd and Washington Sundar also played very well lower down the order and scored 24 and 40 runs respectively.

They have big players in their squad and will hope for better performance from their players and register their first win of the season.

LSG played brilliantly in the last game and won the game by 6 wickets. They were excellent with the bat and chased down a massive of 211 runs and will be high on confidence going into this game.

With the bat, their openers gave them an excellent start and scored 99 runs for the first wicket. Quinton de Kock was their top scorer and scored 61 runs off 45 balls. In the end, Evin Lewis played a match winning knock of 55 runs of just 23 balls.

Overall, they looked well balanced now with the return of Jason Holder and will look to continue their winning run.

Three games so far played on this venue in this season, In which 2 were high scoring and one was low scoring. Bowlers are also getting some help from the pitch initially. Due factor can also come into play in the 2nd innings. Winning the toss and bowling first would be ideal.

The live streaming of Sunrisers Hyderabad vs Lucknow Super Giants, 12th match of IPL 2022 will be available on Hotstar app and Star Sports Network.

You can also catch the live commentary, scorecard, and latest updates of the Indian Premier League 2022 match between SRH vs LSG on IPLT20.com.

SRH vs LSG Head to Head

Both the teams are facing each other for the first time.

He is the skipper of the team and will open the innings. Williamson scored only 2 runs in the last game but is a top class player and excellent pick for C and VC in SRH vs LKN Dream11 Prediction.

Pooran will bat in the middle-order and also keep behind the stumps. He is a hit or miss type of player and was dismissed for a duck in the last game.

He is the main bowler of the team. Kumar will bowl in the powerplay and death. He bowled decently in the last game and picked up one wicket.

He is an all-rounder who can bat in the lower order and bowl Right-arm fast-medium. R Shepherd is very good pick in “SRH vs LSG Dream11 fantasy team”.

He is a very talented fast bowler and will assit Bhuvneshwar Kumar. Natarjan picked up 2 wickets in the last game but was expensive.

He will bat at 3 and is a very talented player. Tripathi failed in the last game and will be desperate to score in this game.

Markram will bat in middle-order and is one of their key batter. He played brilliantly in the last game and scored 57 runs.

He is an exciting find for the team. Malik is known for his express pace. He picked up 2 wickets in the last game.

He is another very important all-rounder for them and can be a trump card pick for this game. Jansen did not play in the last game.

He needs no introduction and is one the best batsman in the competition. Rahul played very well in the last game and scored 40 runs and is a brilliant option for C and VC in SRH vs LKN Dream11 Team for today match.

Q de Kock is also a very talented player and will also keep behind the stumps. He also played very well in the last game and scored 61 runs. De Kock is another solid choice for C and VC.

He is a world class all-rounder and will bowl his 4 overs in powerplay and death and will also do finishing duties with the bat. Holder is a must-have pick.

He will be their main bowler in this season. Avesh Khan was expensive in the last game but picked up 2 wickets.

He will bat in the top order and will play attacking cricket. Lewis played brilliantly in the last game and scored 55 runs off just 23 balls.

He is another excellent batsman and will bat at 4. Pandey scored only 5 runs in the last game and can be a trump card pick in this match.

He is one the best spinners in the competition and is in excellent form. Bishnoi went wicketless in the first game but picked up 2 wickets in the last game.

Hooda will bat in the middle-order and can also bowl few overs with the ball. He batted very well in the first game and scored 13 runs in the last match.

He will bat in the lower middle-order and also bowl his 4 overs with the ball. Pandya played very well in the first game but was wicketless in the last game.

He is another exciting talent to watch out. Ayush Badoni will do the finishing duties with the bat and played a handy knock of 19 runs in the last game.