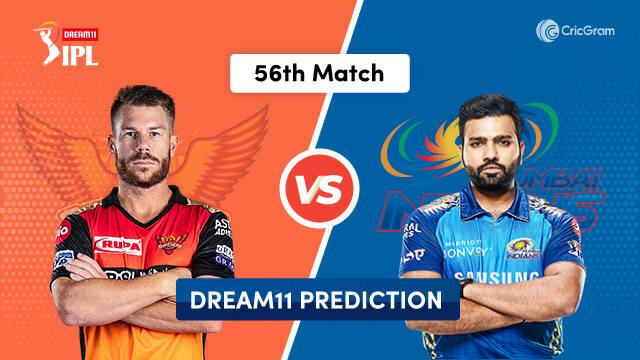 Sunrisers Hyderabad will take on Mumbai Indians in the 56th Match of Dream11 IPL 2020 at Sharjah Cricket Stadium, Sharjah. We will provide SRH vs MI Dream11 Prediction, Probable Playing XI, and Dream11 Tips.

Sunrisers have made a perfect comeback by winning two matches in a row and are currently at the 5th position on the points table with six wins and seven losses and a total of 12 points.

They played brilliantly in the last match and won clinically against a top team like RCB. Wriddhiman Saha is playing well at the top, and David Warner has provided the team to play Kane Williamson in the middle-order, thus adding depth to the batting line-up.

Manish Pandey has done a decent job. He has taken the team over the line in a couple of matches. The injury of Vijay Shankar might be a concern because he was performing very well with both bat and ball in the recent games.

Both the youngsters Abhishek Sharma and Abdul Samad have done a decent job so far, but they need to step up their game as they are nearing the playoffs. Rashid Khan has been bowling extraordinarily this season and has been one of the major reasons for their win in most of the matches.

Natarajan has been perfect with his Yorkers and controlled the flow of runs in the death overs, and to accompany him, Sandeep Sharma is also looking in good form by picking up wickets in the powerplay. The experience of Jason Holder is helping a lot for the SRH bowling, and he is also picking wickets consistently.

The only way for SRH to qualify for playoffs is to win this match. They need to depend on any other teams’ results for their qualification. If they lose this match, then they get eliminated from the race for playoffs.

Mumbai Indians have been playing brilliantly as they are currently at the top of the points table with nine wins and five losses and a total of 18 points. They are officially the first team to qualify for playoffs this season.

Ishan Kishan has made the MI team not feel the absence of Rohit Sharma in the playing XI as he has been batting brilliantly and scoring a lot of runs at the top. He has been very well accompanied by the wicket-keeper batsman Quinton de Kock who is also striking the ball very well.

Suryakumar Yadav batting at No.3 has appeared to be in sublime form this season, batting at a strike rate of 150. Hardik Pandya, Krunal Pandya, and Kieron Pollard have been brilliant with the bat this season as they have played well in the middle order and finished many innings for their team.

The bowling has been brilliant by the MI bowlers so far this season as Bumrah and Boult have been picking up wickets consistently in every match, and both of them are in the Top 5 wicket-takers of this season.

James Pattinson has also been bowling decently and picked up a good amount of wickets. Both spinners Krunal Pandya and Rahul Chahar have done an excellent job in the middle overs by controlling the flow of runs and also picked up crucial wickets. On some occasions, Kieron Pollard has also bowled very well and provided essential breakthroughs.

Mumbai Indians have nothing to worry about this match, and even if they lose this match, they would still be at No.1 position on the points table.

Average 1st Innings Score: 181 (From 11 matches played at this venue so far in this season)

Average 2nd Innings Score: 165 (From 11 matches played at this venue so far in this season)

The pitch here is considered perfect for batting due to short boundaries, and we have seen some high scoring games here. But from the past couple few matches, it has appeared that the pitch has slow down very much, and it is not that easy to score runs here.

Five of the eleven matches have been won by the team batting first at this venue.

Skipper Warner is the first batsman to score fifty half-centuries in the history of IPL. He scored only 8 runs in the last match. David Warner is very good Captain choice for SRH vs MI Dream11 Team.

He is a wicketkeeper-batsman and a decent striker of the ball. W Saha batted well, scoring 39 runs from 32 balls in the last match.

He generally bats in the middle order and is known for playing according to the match’s situation. Pandey scored 26 runs from 19 balls in the last game.

He opens the innings for SRH along with Warner and made his debut last season. Bairstow did not play the previous match.

He is a right-handed batsman and is an outstanding batsman in the middle order. Williamson scored 8 runs in the last match.

He is a bowling allrounder. Holder scored 26* runs from just 10 balls and also bowled well, picking up 2 wickets in the last match.

He is a right-arm leg spinner and is consistent in picking up wickets. Rashid is also very good at controlling the flow of runs. He bowled well, picking up one wicket in the last match.

He is a left-arm medium-fast bowler and is picking wickets consistently for SRH. Natarajan bowled well in the last match, picking up 1 wicket for just 11 runs in his 4 overs.

He is a right-arm fast bowler and troubles the batsmen with his swing. Sandeep bowled brilliantly, picking up two wickets for just 20 runs in the last match.

He is the wicket-keeper batsman for the team and generally opens along with Rohit. Quinton scored 26 runs in the last match.

He is a left-handed batsman and has been opening the innings for MI in the absence of Rohit Sharma. Ishan batted brilliantly, scoring 72* runs from 47 balls in the last match.

He is a right-hand batsman. C Lynn played 41 matches and scored 1280 runs in IPL. He didn’t played a match so far in Dream11 IPL 2020. If he plays then very good to pick in SRH vs MI Fantasy Cricket Team.

He is one of the best bowlers in the world. Bumrah bowled brilliantly, picking up three wickets for just 17 runs in his four overs in the previous match.

He generally bats at NO.3 in the team. Surya scored 12* runs in the last match.

Boult is very dangerous and one of the top bowlers across the world. He is a left-arm bowler who can swing the ball early in the innings. Boult bowled brilliantly in the last match, pick up 3 wickets for just 21 runs in his 4 overs.

He is a right-arm fast bowler and has made his debut this season. Pattinson did not play the last match.

He is a Left-arm fast-medium bowler. M McClenaghan didn’t played a match so far this season, If plays then very good to pick in Dream11 Team.

He is a bowling allrounder and can play big shots down the order. Coulter-Nile picked up one wicket in the last match.

He is a right-arm leg-break bowler and has been consistently picking up wickets this season. Chahar managed to pick up 1 wicket in the last match.

He is a match-winning allrounder and has performed for the team with both bat and ball. Pollard did not get to bat or bowl in the last match.

He is one of the top allrounders in India. Hardik Pandya did not play the last match.

Mumbai Indians can give rest to their important players so final team may be changed.