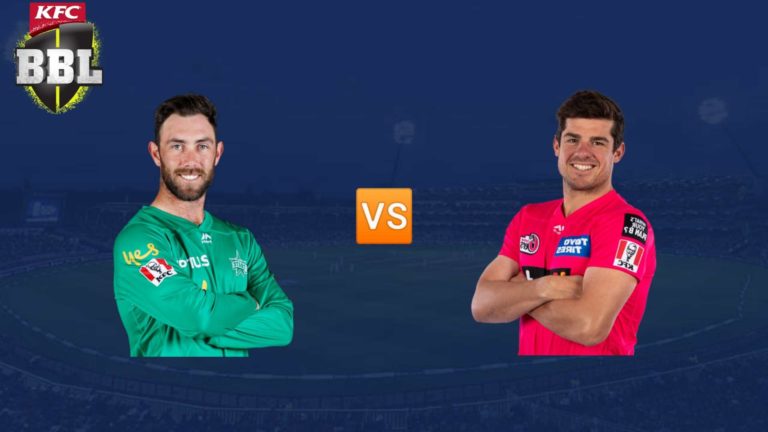 Melbourne Stars will take on Sydney Sixers in the 34th match of Big Bash League 2019-20 at Melbourne Cricket Ground in Melbourne. We will provide STA vs SIX Dream11 Prediction, Match Preview, and Fantasy Cricket Tips.

Melbourne Stars are having a good time as they are currently at the 1st position on the points table with 7 wins and a loss and a total of 14 points.

In the last match, bowling first, Stars gave away runs at the beginning of innings and weren’t able to pick up wickets until the 11th over. But after that, they bowled well and restricted the opponents to a total of 168 runs. Nathan Coulter-Nile and Sandeep Lamichane picked up 2 wickets each, and Haris Rauf picked up 1 wicket.

With 169 to chase and with a batting line up of Stars, it was going to be a good contest. They lost the wicket of inform batsman Marcus Stoinis for a duck in the 1st over. Stars lost the wicket of Ben Dunk in the 6th over who scored 14 runs and in the very next over they lost the wicket of Hilton Cartwright who scored 35 runs. But after that, Maxwell and Nick Larkin batted brilliantly without losing any further wickets by scoring 33* runs and 83* runs, respectively. They won the match quite comfortably by 7 wickets within 19 overs.

Stars have won 5 matches in a row, and the next game against Sydney Sixers will be a tough competition for them as Sydney Sixers are also on a streak of 5 games win.

Sydney Sixers are also having a great time this season as they have won 6 out of 8 matches and are currently in the 2nd position with a total of 12 points.

In the last match, bowling, first Sixers picked up 2 wickets in the power play and gave away 53 runs. They gave away runs in the middle overs, and the opposition were 110 runs for 4 wickets in the 15th over. But after that, Sixers bowled brilliantly and picked up 6 wickets for just 25 runs. They restricted the opposition to a total of 135 runs. Tom Curran bowled brilliantly and picked up 4 wickets. Ben Dwarshuis and Llyod Pope picked up 2 wickets each. Jackson Bird and Josh Hazlewood have picked up 1 wicket each.

With 136 runs to chase, Sixers lost 2 wickets in the 3rd over and looked in trouble. But Daniel Hughes and James Vince batted sensibly for quite a while by scoring 17 and 27 runs and gave momentum to Sixers. After that, Rashid Khan bowled brilliantly by picking up a hat-trick, and Sixers were at one stage 97 for 7 and looked like they were going to lose the match. At that point, Tom Curran batted well by scoring 20 runs in the end but got out in the 18th over. Sixers needed 12 runs in 12 balls, and Josh Hazlewood hit 3 consecutive boundaries and led Sixers to a victory by 2 wickets.

They would want to win their next match against Melbourne Stars and show them that they are as equally strong as them in this season.

Average first innings score: 144 (2 Matches played at the venue so far this season)

This pitch is generally considered to have a good pace and bounce at the start of the game, but as the match progresses, it gets more comfortable for the batsmen.

Glenn Maxwell:
He is a batting all-rounder, but he is mostly known for his destructive batting. Maxwell has a wide range of shorts and can smash the bowlers all over the park. In the last match, he scored 83* runs from 45 balls and was a man of the game. He has scored a total of 311 runs and picked up 4 wickets this season.

Marcus Stoinis:
He is one of the top all-rounders in the Big Bash League. Stoinis is equally good with both bat and ball. He opened the batting for Melbourne Stars and was out for a duck in the previous match and has scored a total of 326 runs in this season.

Sandeep Lamichhane:
This young lad is a brilliant leg spinner and adapts to conditions very quickly. He picked up 2 wickets in the previous match and has picked up a total of 8 wickets this season.

Haris Rauf:
He is a right-arm fast bowler from Pakistan and has looked very impressive this season. Rauf was not able to play all the matches as only 2 foreign players are allowed and picked up 1 wicket in the last game. He has picked up 14 wickets in the 5 games he has played.

Daniel Worrall:
He is a medium-fast bowler and bowls at a decent pace but did not play the last match. D Worrall has picked up a total of 4 wickets this season.

Nick Larkin:
He is a right-handed batsman and bats quite sensibly and, at the same time, can hit some big shots too. Larkin has played only 4 innings this season and scored 33 runs in the last match. He has scored a total of 104 runs this season

Daniel Hughes:
He is the opening batsman for Sydney Sixers alongside Josh Phillippe and is a very consistent batsman. He played a sensible knock of 17 runs in the last match and has scored a total of 185 runs this season.

Josh Phillippe:
He opens the innings for Sydney Sixers and is a destructive batsman. Philippe scored 8 runs in the last match and scored a total of 264 runs in this season.

James Vince:
He is a very talented batsman and can play big innings for his team. In the last match, he scored 27 runs and has scored a total of 173 runs this season.

Tom Curran:
He is a brilliant all-rounder. Tom is equally good with the bat as well as the ball. He scored 21 runs in the last match and picked up 4 wickets. He has picked up 13 wickets and scored a total of 120 runs this season. Tom Curran is the best to pick in the STA vs SIX Dream11 Team.

Ben Dwarshuis:
This left-arm medium-fast bowler has bowled exceptionally well and has picked up 10 wickets this season. He managed to pick up two wickets in the last match.

Jackson Bird:
He is also an attacking bowler and picked up 1 wicket in the last match and has picked up a total of 7 wickets this season.

Lloyd Pope:
This right-arm leg spinner has looked impressive this season and picked up 2 wickets in the last match and has picked up a total of 10 wickets this season.

Moises Henriques:
Skipper is an all-rounder and is generally good at batting but can bowl a few overs of medium pace too. He missed the previous two matches. Henriques has scored 114 runs in the 6 innings he has played.

If you liked Melbourne Stars vs Sydney Sixers Dream11 Prediction, then follow us on Twitter for Dream11 Team and Fantasy Cricket Tips. You can also find us on Facebook.