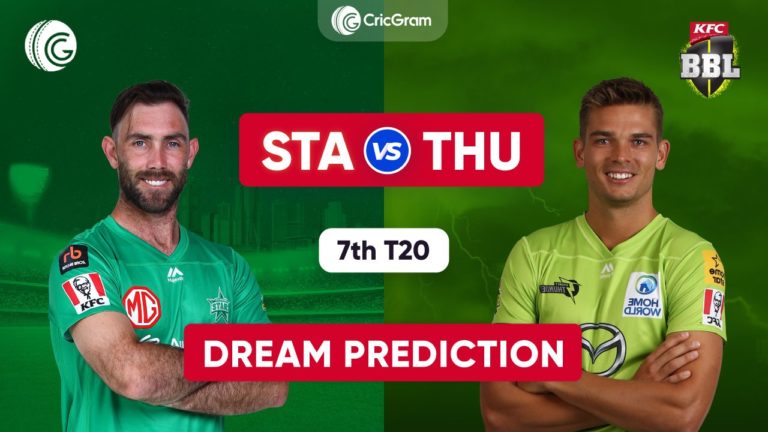 Melbourne Stars and Sydney Thunder will play in the 7th match of the Big Bash League 2021-22 at Melbourne Cricket Ground, Melbourne. We will cover STA vs THU Dream11 Prediction, Probable Playing 11, and Fantasy Cricket Tips.

Melbourne Stars faced disappointment in the tournament’s first match as they lost by 152 runs and are currently at the bottom of the Big Bash League 2020-21 points table.

Joe Clarke and Peter Nevil opened the innings, but Clarke got out early. Larkin, Maxwell, and Cartwright returned to the pavilion without any contribution in the middle. The highest scorer in the team was Nevil, with 18 runs.

Even the bowlers failed to perform as everyone conceded a lot of runs. Brody Couch managed to pick up two wickets and Maxwell, Rainbird got one wicket each.

Stars haven’t improved from the last season, and if they continue to perform the same way, it will be very difficult for them this season.

Sydney Thunder won their first match and is currently at the 3rd position on the points table with four points.

Alex Hales and Whiteman opened the innings, but Hales got out for a duck, and Whiteman did not score much. Sam Billings and Alex Ross batted brilliantly in the middle-order, scoring 45* and 61* runs, respectively, leading the team to victory.

Daniel Sams picked up three wickets in the bowling department, and Gurinder Sandhu, Nathan McAndrew got two wickets each. Tanveer Sangha picked up one wicket.

Sydney Thunder has a brilliant bowling attack, but they need to improve their batting lineup.

The pitch at MCG is good for batting and average 1st innings score is 169 runs (last 5 matches). It provides a good pace and bounce for the fast bowlers and has significant boundaries.

(The team chasing won seven out of the fifteen matches played at this venue.)

STA vs THU Head to Head

Skipper Maxwell batted in the middle-order in the last match and scored only four runs but managed to pick up a wicket. Glenn Maxwell is very good Captain choice in STA vs THU Dream11 Team.

Stoinis opens the innings for the team and can also bowl a few overs of medium pace. He did not play the last match.

Russell is a brilliant all-rounder in the T20 format and will be playing in BBL for the first time after 2017.

Coulter-Nile is a bowling all-rounder and played only six matches last season but picked up 11 wickets.

Zampa is the experienced spinner in the team but went wicketless in the previous game.

Brody Couch is a right-arm fast bowler and made his debut in BBL this season and was expensive in the first match but managed to pick up two wickets.

Sams is a bowling all-rounder and bowled brilliantly in the first match, picking up three wickets for just 22 runs.

Hales opened the innings in the last match and was out for a duck, but he is a brilliant player.

Billings is the wicketkeeper-batsman of the team and batted in the middle-order in the last match. He scored 45* runs from 36 balls.

Ross is a right-handed batsman and is perfect for the role of finisher as he scored 61* runs from 46 balls.

Sandhu is a right-arm fast bowler and picked up two wickets for 17 runs in the last match.

McAndrew bowls right-arm fast and managed to pick up two wickets in his four overs in the previous game.

Sangha is a leg-break bowler and managed to get a wicket in the last match.

Cutting bowled an over in the last match, which was expensive, and he did not get the chance to bat.

This match is looking risky on Dream11 so try to play only GLs.