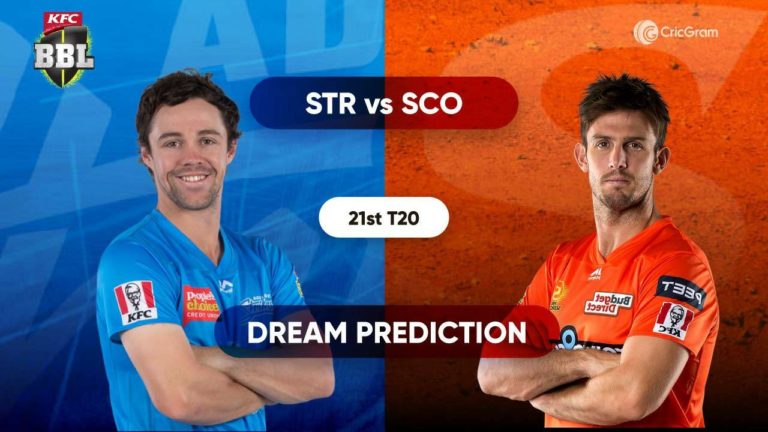 Hello and welcome to our STR vs SCO Dream11 Prediction, Probable Playing XI, and Fantasy Cricket Tips. Adelaide Strikers vs Perth Scorchers will play against each other in the 21st match of the Big Bash League 2020-21 at Adelaide Oval, Adelaide.

They have managed to win three matches out of the five played so far and are currently at the 3rd position on the points table with a total of 13 points. They won their last match comfortably by 71 runs.

The opening batsman, Phil Salt, performed brilliantly, scoring a quick half-century, but his partner Jake Weatherald couldn’t score much and was also very slow in his approach. Matt Renshaw and Jon Wells, who appeared to be getting back in form, once again put up a bad performance.

In the end, Matthew Short’s 16 runs and Rashid Khan’s quick 23 runs helped the Strikers to post a good total.

The bowling performance was once again brilliant in the last match as each bowler picked up two wickets, and all of them controlled the flow of runs, which resulted in the opposition getting all out for a low score, and Strikers won by 71 runs.

Strikers have been performing decently in their bowling department, but they still have a lot to do in their batting. If Strikers improve their batting, they have a perfect chance of being at the table’s top.

The Perth Scorchers have a very tough time as they are yet to win a match this season and are currently at the bottom of the points table with 2 points. Scorchers lost their last game by 71 runs.

Josh Inglis has appeared to be out of form and has not scored more than 20 runs in a single match so far this season, and his new opening partner Jason Roy who played his first match this season, batted decently. Colin Munro has played a couple of good knocks so far but cannot make an impact on the team.

Liam Livingstone also played for the first time in the last match this season and put up a decent performance, and we can expect some good knocks from him in the future. Ashton Turner, who played his quick innings in every match and performed consistently right from the season’s start, failed to score in the last game.

Mitchell Marsh has not performed consistently after returning from the injury and has played well only in one inning.

The Scorchers’ bowlers did a decent job in the last match by picking up wickets consistently and not allowing them to score freely. Jhye Richardson and Fawad Ahmed have been consistent wicket-takers of the team. In addition to them, Andrew Tye and Mitchell Marsh bowled well in the last match and picked up two wickets.

Scorchers are the only team who are yet to win a match so far, and it is high time that they start winning in the remaining games. Every loss from now on will take the Scorchers away from the hopes of qualifying for playoffs.

The pitch is considered very good for batting, and high scoring games can be expected from this venue. Spinners will play a crucial in the second half of the match.

One out of the one match has been won by the team batting first.

The weather will be sunny, and there is no chance of rain during the match.

He is a left-handed batsman and generally opens the innings for the team. In the last match, he scored only 18 runs.

He is a young right-handed batsman and generally opens the innings alongside Weatherald. He scored 51 runs from just 31 balls in the last match.

Skipper Carey is the wicket-keeper batsman of the team. He scored only 15 runs in the last match.

He is one of the top leg-spinners globally and can also play some big shots down the order. Rashid Khan scored 29 runs from just 13 balls and also managed to pick up two wickets in the last match.

He is also a left-handed batsman and can also bowl a few overs of spin if required. Renshaw was unlucky as he got run-out for only 3 runs.

Siddle is a veteran right-arm fast bowler and will be leading the pace attack of the team. He bowled well in the last match, picked up two wickets, and is the leading wicket-taker this season.

He is a right-arm fast bowler and consistently picks up wickets. Agar bowled well, picking up two wickets in the last match. He has picked up wickets in every match so far in this season.

He is a middle-order batsman and is an excellent striker of the ball. Wells scored only 7 runs in the last match.

He is a right-arm fast bowler and bowls at a good pace. In the last match, Worrall scored 8 runs and managed to pick up 2 wickets.

He is a left-arm orthodox bowler and can play some big shots down the order. In the last match, Briggs bowled well, picking up 2 wickets.

Colin Munro is a player to watch out for this season and opens the innings for his team. He scored only 5 runs in the last match.

He is a right-handed and attacking batsman. Jason Roy scored 21 runs in the first match of the season.

He is a brilliant batting all-rounder and is equally good with both bat and ball. Marsh scored only 1 run in the last game but bowled for the first time in this season and picked up 2 wickets. He is very good Captain choice in STR vs SCO Dream11 Team Prediction.

He is a right-handed batsman and is also a part-time bowler. Livingstone played his first match of this season and scored 22 runs from 24 balls.

Josh Inglis is a hard-hitting wicketkeeper-batsman and will open for his side and provide an excellent start to his team. He scored only 16 runs in the last match and has looked out of form so far in this season.

Jhye Richardson is one of Australia’s best domestic bowlers and has a bit of international experience under his belt. Richardson bowled brilliantly, picking up 3 wickets in the last match.

He is a Right Arm medium-fast bowler. Andrew Tye was very expensive but managed to pick up 2 wickets in the last match.

Skipper Turner is a big-hitter of the ball and plays the role of a finisher in the team. He scored only 2 runs in the last match.

He is a right-arm leg-break bowler and consistently picks up wickets. Fawad went wicketless in the last match.