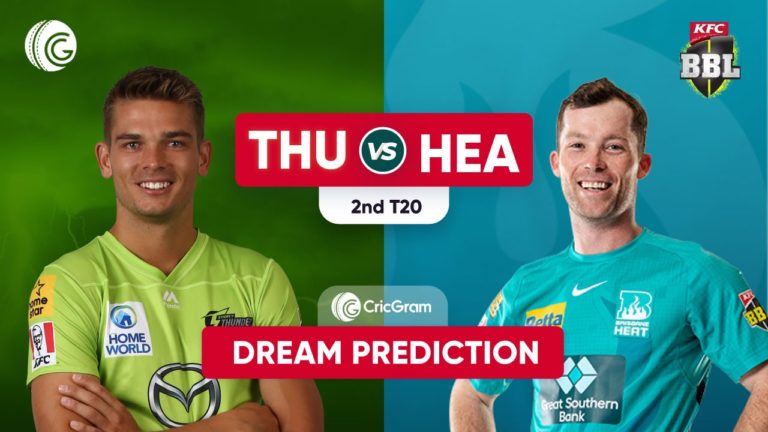 Sydney Thunder and Brisbane Heat will play in the 2nd match of the Big Bash League 2021-22 at Manuka Oval, Canberra. We will cover THU vs HEA Dream11 Prediction, Probable Playing 11, and Fantasy Cricket Tips.

Sydney Thunder won the title once so far in the history of BBL and has reached the knock-out stage only thrice in ten seasons.

The right-arm off-break bowler, Chris Green, will be captaining the side in the absence of Usman Khawaja. Alex Hales and Sam Whiteman might get the chance to open the innings. There are many options in the middle-order, but they might go with Sam Billings, Daniel Sams, and Ben Cutting.

The main focus would be on Daniel Sams, and Nathan McAndrew in the bowling department. The spin duo Green and Tanveer Sangha might play a crucial role in the middle-overs.

This season, Sydney Thunder has some boxes to tick, and they have formidable opposition in their first match.

Brisbane Heat won the second season of the Big Bash League, but apart from that, they have not been able to perform consistently over the years.

The wicketkeeper-batsman, Jimmy Peirson, will lead the side. Chris Lynn and Max Bryant are likely the opening pair of the team, Ben Duckett, S Heazlett and Tom Cooper will form the team’s middle-order. Skipper Peirson and Wildermuth might perform the role of the team’s finisher.

The bowling unit might be lacking some star bowlers in the team. Only Mujeeb is a well-known name in the team. Matt Kuhnemann, Wildermuth, and Bazley might be considered the wicket-takers of the team.

Brisbane Heat has a good batting unit but, they need to improve their bowling performance this season.

Manuka Oval provides a pitch that is good for batting, and batters can score many runs. We can expect a total of around 160-170 on this pitch.

(The team chasing won five out of the eleven matches played at this venue.)

THU vs HEA Head to Head

Hales is an aggressive right-handed batsman and opens the innings for the team. He scored 543 runs in the last season at a strike rate of 161.

Sams is a bowling all-rounder and performed brilliantly with the bat last season. He missed a few matches due to injury but scored 200 runs and picked up 11 wickets. Daniel Sams is a very good Captain choice in THU vs HEA Dream11 Team.

Billings keeps the wickets and generally bats in the middle-order. He scored 260 runs in the last season.

Cutting is an all-rounder and performs equally well with both bat and ball. He scored 280 runs but picked up only four wickets in the last season.

He is a right-arm fast bowler and sometimes turns out to be a little expensive. Nathan picked up 15 wickets in the last season.

Skipper Green is a right-arm off-break bowler and can also bowl in the powerplay. He can also be handy with the bat.

Chris Lynn opens the innings and is known for playing destructively and had scored five fifties in the last season. He is also a very good Captaincy option in Brisbane Heat vs Sydney Thunder Dream11 Team.

Wildermuth is a bowling all-rounder and managed to pick up thirteen wickets last season.

Bryant can open the innings or bat in the middle-order based on the team’s requirement. He scored 302 runs in the previous season.

Bartlett is a young right-arm fast bowler who made his debut last season and picked up 12 wickets.

Mujeeb bowls right-arm off-spin and picks up wickets consistently. He got 14 wickets in just eight matches in the last season.