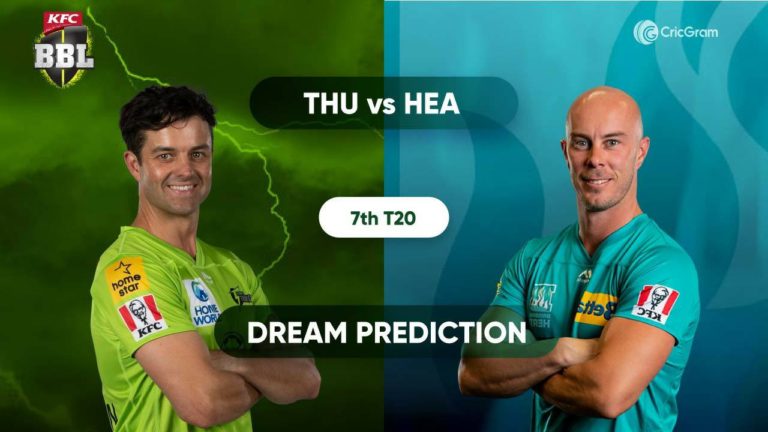 Sydney Thunder and Brisbane Heat will clash against each other in the 7th match of Big Bash League 2020-21 at Manuka Oval, Canberra. We will cover THU vs HEA Dream11 Prediction, Probable Playing XI, and Fantasy Cricket Tips.

The 7th match of the Big Bash League will see Sydney Thunder and Brisbane Heat lock horns against each other. Both the teams are coming into this match with a loss in their outing.

Sydney Thunder lost their game against Melbourne Stars; Bowling first, Thunder restricted the Stars to 169 runs. All the bowlers played their part, but Tanveer Sangha was the pick from the bowlers as he ended his spell with the figures of 2/26 in 4 overs. Daniel Sams was also excellent with the ball in the death and finished picking up two wickets in the last over.

While chasing Thunder lost Usman Khawaja early, but Hales and Ferguson steadied the ship with a good partnership of 69 runs. Ferguson was the pick from the batters. He scored a solid knock of 54 runs, but in the end, we’re not able to cross the line and eventually lost the match.

Brisbane Heat, on the other hand, also their lost match against the Stars. Batting first, Heat was bowled out for 125 runs, and none of the batters were successful in playing a big inning and did not show intent with the bat. Chris Lynn is the only established batsman in their line up, and batting can be a concern for them in the rest of the tournament. Stars comfortably chased the total with almost 3 overs to spare. Jack Wood looked impressive with the ball as he finished his spell with 2 wickets in his 3 over spell.

Thunder looks like a solid team compared to the Heat, but if Chris Lynn fires, it can go another way round, and we can hope for a cracker of the contest on Monday.

Average 1st innings score: 155 (based on the 2 matches played here so far this season)

Average 2nd innings score: 147 (based on the 2 matches played here so far this season)

The two matches played on the ground show that batting is not that easy on this slow pitch, and the same is expected on Monday with a bit of assistance for the pacers in the initial overs. The spinners were successful in picking 9 wickets in the two matches played and are expected to play a crucial role in this match.

The pitch is expected to slow down as the game progresses. A score between 150-170 can be expected by the team batting first. The team winning the toss would look to bat first.

BREAKING | @Mujeeb_R88 has recovered from #COVID19 and has joined our squad in Canberra! ✅#BringtheHEAT #BBL10 https://t.co/1DIhzlqbDU

Hales will open the innings for his side and will play attacking aggressively in the powerplay. Hales played a decent knock of 47 runs in the last game and is one of the team’s key batsmen.

He will bat at No 3 and will also lead the side. He was excellent with the bat in the last game as he scored 54 runs off 35 balls. Ferguson is their key batsman for the tournament, and another good knock is expected from him in this match.

Khawaja will open the innings along with Hales and will play attacking cricket. Khawaja managed to score just 7 runs in his last game but is one of Australia’s best batsmen and is another top pick for the Fantasy Team.

Daniel Sams is another excellent all-rounder who will bowl in the powerplay and death and be handy with the bat. He picked 2 wickets in the last match, and both the wickets were picked in the last over of his spell. D Dams is very good to pick in THU vs HEA Dream11 Team.

Cutting is one of the best all-rounders in the world. Cutting will bowl 2-3 overs in the middle overs and do the team’s finishing duties. He failed in the last match, but many of him expected from him in this match.

Green is a right-arm off-spinner who will bowl in the powerplay and provide an early breakthrough for the team. Green picked 2 wickets in his last outing.

Sangha is a young right-arm leg spinner and was excellent in the last match as he picked 2 wickets in his 4 overs and is another top pick for the match.

Lynn needs no introduction and is known for his hard-hitting all around the globe. Though Lynn only managed to score 20 runs in the last game but was excellent in the warm-up games played before the tournament and is a must-have pick for the match.

Lawrence is another good youngster who will bat in the middle order and is known for his aggressive nature in England. Though he scored only 8 runs in the last game, a lot more was expected in the rest of the tournament.

Ben Laughlin is their key pacer leading the pace attack and is an excellent bowler in the T20 format. He is known for his variations in the death. He was economical in the last game but was not able to provide any breakthrough for his team.

Bryant is known for his attacking cricket and will open the batting for his team. He scored 20 runs in the last match.

Jack Wood is another good youngster who picked two wickets in the last game and looked impressive with the ball. He was one of the highest wicket-taker in a local T20 tournament held before the BBL.

He will open the innings with Max Bryant and will play attacking cricket in the powerplay. He scored only 14 runs in the last game but was in perfect form in a local tournament before the BBL.

He is one of the most experienced players in the BBL who will bat in the middle order. He played a decent knock of 26 runs in the last game.