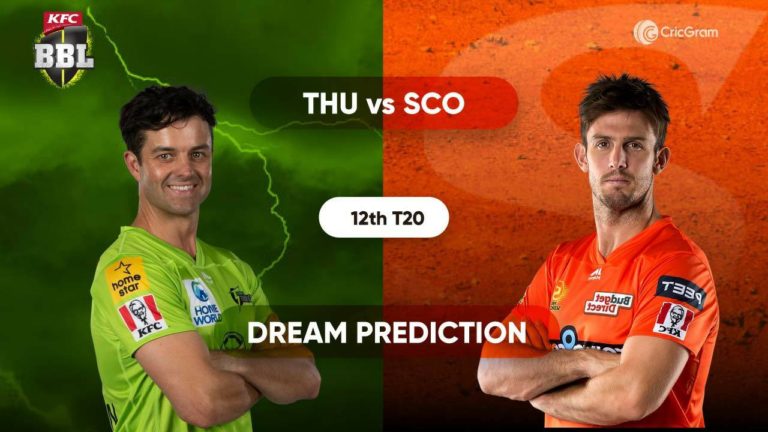 Hello and welcome to our THU vs SCO Dream11 Prediction, Probable Playing XI, and Fantasy Cricket Tips. Sydney Thunder and Perth Scorchers will clash against each other in the 12th match of the Big Bash League 2020-21 at Manuka Oval, Canberra.

The Sydney Thunder have performed decently so far as they have won 1 out of 2 matches and are currently at 6th position on the points table with a total of 3 points. In the last game, Sydney Thunder performed well and won the match comfortably by 4 wickets.

Alex Hales and skipper Callum Ferguson, the most consistent batsmen of the team, got out without opening their account of runs. Another opener Usman Khawaja also got out early, scoring only 17 runs. But in the middle order Alex Ross, Baxter Holt, and Ben Cutting played decently and stabilized the innings.

The innings star was Daniel Sams, who scored a quick fifty and played a major role in the team’s victory and was awarded Man of the Match.

Jonathan Cook is continuing his good form with the ball and picked up 2 wickets in this match, and Daniel Sams, who picked up wickets and controlled the flow of runs. The bowling has been decent so far in this tournament.

Thunder would want to continue their winning momentum and win against Scorchers and improve their position on the points table.

The Perth Scorchers had to face disappointment once again as the last match was abandoned in the 2nd innings due to rain, and they are currently at the 7th position on the points table with 2 points.

Josh Inglis once again got out early and has not appeared to be in good form, but Colin Munro, after a disappointing start to the tournament, played well in the last match scoring almost a fifty. In the middle-order, Joe Clarke and Skipper Ashton Turner played brilliantly, scoring runs quickly.

All-rounder Mitchell Marsh has not appeared to be in perfect form after the injury, and probably he needs some more time to get back in form.

Jhye Richardson and Fawad Ahmed will be the crucial players in the bowling department. If Andrew Tye can also pick up some wickets, then Scorchers have a perfect chance of winning the match. Scorchers need to improve their overall performance and bounce back into the tournament and climb up the points table.

Average 1st innings score: 163 (based on the 3 matches played here so far this season)

Average 2nd innings score: 158 (based on the 3 matches played here so far this season)

The pitch is expected to slow down as the game progresses. A score between 150-170 can be expected by the team batting first. The team winning the toss would look to bat first.

The chasing team has won two out of the three matches.

The weather will be clear skies and no chance of rain during the match.

Hales will open the innings for his side and will play attacking aggressively in the powerplay. Hales was out for a duck in the last game but is one of the team’s key batsmen.

He will bat at No 3 and will also lead the side. Ferguson was out for a duck in the last match.

Khawaja will open the innings along with Hales and will play attacking cricket. Khawaja managed to score 17 runs in his last game but is one of Australia’s best batsmen and is another top pick for the Fantasy Team.

Daniel Sams is another excellent all-rounder who will bowl in the powerplay and death and be handy with the bat. He picked 2 wickets in the last match and scored the match-winning 65* runs. D Sams is excellent to pick in THU vs SCO Dream11 Team.

Cutting is one of the best all-rounders in the world. Cutting will bowl 2-3 overs in the middle overs and do the team’s finishing duties. He scored 29 runs but went wicketless in the last match.

Green is a right-arm off-spinner who will bowl in the powerplay and provide an early breakthrough for the team. Green picked 1 wicket in his last outing, but it was a little expensive.

Sangha is a young right-arm leg spinner and bowled well in the last match but was unlucky to be wicketless.

He is a right-arm leg-spin bowler and is good at picking up wickets. Cook bowled well in the last match, picking up 2 wickets.

He is a right-handed batsman and generally bats in the middle-order. Ross batted well in the last match scoring 34 runs from 24 balls.

Colin Munro is a player to watch out for this season and opens the innings for his team. He scored 49 runs from 36 balls in the last match.

Josh Inglis is a hard-hitting wicketkeeper-batsman and will open for his side and provide an excellent start to his team. He scored only 7 runs in the last match and has looked out of form so far in this season.

He is a young right-handed batsman and generally bats at No.3. Clarke scored 34 runs from just 16 balls in the last match.

He is a brilliant batting all-rounder but is expected to only contribute only with the bat for some matches this season. Marsh was out for a duck in the last game.

Skipper Turner is a big-hitter of the ball and plays the role of a finisher in the team. He scored 39 runs from just 17 balls in the last match.

He is a Right Arm medium-fast bowler. Tye did not get to bowl in the last match.

Jhye Richardson is one of Australia’s best domestic bowlers and has a bit of international experience under his belt. Richardson bowled only one ball and picked up a wicket in the last match.

He is a right-arm leg-break bowler and consistently picks up wickets. Fawad did not get to bowl in the last match.