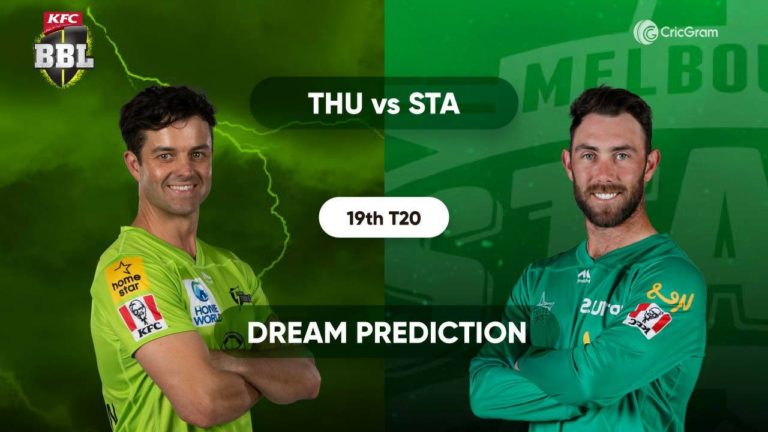 Hello and welcome to our THU vs STA Dream11 Prediction, Probable Playing XI, and Fantasy Cricket Tips. Sydney Thunder vs Melbourne Stars will play against each other in the 19th match of the Big Bash League 2020-21 at Manuka Oval, Canberra.

After disappointing performances, both Alex Hales and Usman Khawaja appeared to be getting back in form as they both played aggressively and gave an excellent start to the Thunder. Skipper Ferguson, as usual, batted decently and steadied the middle order.

Oliver Davies has been the best find for Thunder this season. He has been batting brilliantly in the middle order scoring runs at a reasonable strike rate, and Ben Cutting is supporting him very well by batting at the same pace.

All the bowlers performed well by either controlling the flow of runs or by picking up wickets. Especially the young leg-spinner Tanveer Sangha bowled brilliantly in the last match by picking up four wickets.

Thunder has won three matches consecutively, and they would want to continue their streak by winning against Stars and move up the points table.

The Melbourne Stars have performed decently as they have won 2 out of the four matches, and one match was abandoned due to rain. Melbourne Stars are now at the 5th position on the points table with a total of 10 points.

Stars had to face disappointment for the first time as they lost the last match by 1 wicket. They had a very slow start as Andre Fletcher, Ben Dunk and Cartwright were not able to score runs freely, and it appeared as if Star would have to settle for a low score.

But Maxwell and Pooran had other plans as they both hit almost every ball out of the park and scored two brilliant fifties and helped the team post a total of 193 runs.

The bowling attack was considered one of the best in the tournament fell flat in the last match as they managed to pick up wickets at regular intervals but failed to control the flow of runs. Liam Hatcher has appeared to be in perfect form this season as he has been picking up wickets consistently in every match.

Adam Zampa and Nathan Coulter-Nile have also been performing decently and have managed to get some crucial wickets.

Stars would be eager to get on the field against Thunder and would like to win this match and get back to their winning ways.

The pitch is expected to slow down as the game progresses. A score above 165 could be considered a fighting total.

The chasing team has won three out of the five matches.

Hales will open the innings for his side and will play attacking aggressively in the powerplay. Hales scored 35 runs from 21 balls in the last match and is one of the team’s key batsmen.

Khawaja will open the innings along with Hales and will play attacking cricket. Khawaja scored 34 runs from just 18 balls in his last game and is one of Australia’s best batsmen and is another top pick for the Fantasy Team.

He will bat at No 3 and will also lead the side. In the last match, Ferguson scored 31 runs from 31 balls and appeared to be slow in his approach.

Daniel Sams is another excellent all-rounder who will bowl in the powerplay and death and be handy with the bat. He scored 22 runs from 12 balls and was expensive but managed to pick up a wicket in the last match.

He is a Right-arm fast bowler and can trouble any batsman with his pace. Milne bowled well in the last match and managed to pick up 2 wickets.

Cutting is one of the best all-rounders in the T20 format in the world. Cutting will bowl 2-3 overs in the middle overs and do the team’s finishing duties. He was unlucky as he got run-out without facing a ball in the last match and did not get the chance to bowl.

Sangha is a young right-arm leg spinner and bowled brilliantly in the last match picking up 4 wickets for just 14 runs.

Green is a right-arm off-spinner who will bowl in the powerplay and provide an early breakthrough for the team. Green bowled well picking up 2 wickets for just 7 runs in the last match.

He is a young right-handed batsman and has been consistently scoring runs in the middle-order. Davis scored 48 runs from just 23 balls in the last matches.

He is a right-handed batsman and is an excellent striker of the ball. Billings will be playing BBL after three years for the first time.

Maxwell is a batting all-rounder known for playing big shots and has a strike-rate of over 150. He can also bowl a few overs of spin if required. Maxwell batted brilliantly scoring 71* runs from 47 balls but was very expensive with the ball and managed to pick up a wicket.

He is a batting all-rounder and can also bowl a few overs of medium pace. Stoinis did not play the last match.

He is a left-hand batsman and is an outstanding player of T20 and can play big shots. Pooran batted exceptionally well in the last match scoring 65* runs from just 24 balls.

He bats at No.3 and is a good striker of the ball. Cartwright was very expensive with the ball and did not get to bat in the last match.

He is a right-arm fast bowler and bowls at a perfect pace. Hatcher bowled brilliantly, picking up three wickets in the last match.

He opens the innings along with Stoinis and can play big shots from the start of the innings. Fletcher scored only four runs in the last match.

He is a right-arm leg-break bowler and bowls brilliantly in the middle overs, and pick up wickets at a crucial time. Zampa was very expensive in the last match but managed to pick up 2 wickets.

This is looking risky match for Small Leagues, so it is good to play only Grand Leagues on Dream11. I have posted 2 combination for the small leagues. Final team, I will post on Telegram.