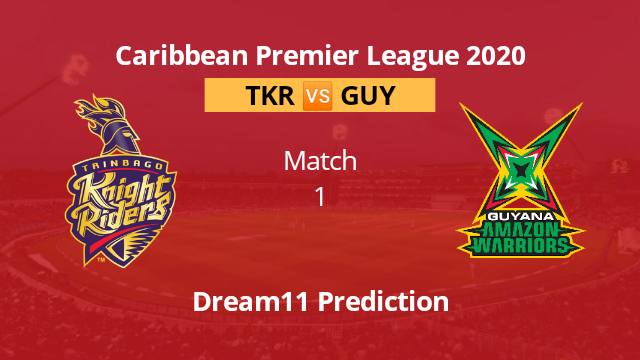 The Knight Riders are three-time champions of the CPL and are one of the toughest sides of the tournament. Kieron Pollard will lead Trinbago Knight Riders in this season and have players like Dwayne Bravo and Sunil Narine in their squad. TKR is the hot favourites heading into this competition, although their opponents Guyana Amazon Warriors aren’t far off.

Runners-up in the previous edition, Guyana would look to go a step further this time around and will bank on the likes of Shimron Hetmyer and Nicholas Pooran in the middle order. Chris Green will be leading the Guyana side. Shemron Hetmyer, Brandon King, and Imran Tahir are essential to watch players from Guyana.

A competitive pitch awaits the two sides in the CPL 2020 opener with something in it for everyone. In the two games played at this venue last season, spinners had a massive say in the proceedings, which shouldn’t be any different in this game as well.

The pacers will revert to change of pace with wickets in hand being crucial for the batting side. Both teams will look to bat first with 160 being a good score on this surface. Pacer bowlers will be essential on this pitch.

The Weather will be clean with a slight cloud. But there is no chance of rain. We can expect a good match.

He is consistently contributing with the bat and ball for TKR. So far, he has managed 948 runs and dismissed 97 batsmen with the ball in the CPL T20 tournament.

Colin Munro is an amazing and talented opener, who is consistently scoring from the top for TKR.

He sometimes comes out to bat in top order. Sunil Narine has done an amazing and disciplined job while bowling in Caribbean Premier League due to which he has managed to take 72 wickets for his team.

He is a match-winning allrounder, who has grabbed 47 wickets and scored 1759 runs with his willow. He will lead the TKR team as a Captain. Pollard has performed exceedingly well in CPL T20. He should be picked in any fantasy team for the upcoming game.

He is consistently contributing with the bat. Simmons is an amazing opener with dangerous batting skills.

He was one of six players that TKR retained in the CPL draft 2019. Darren Bravo played 69 matches and scored 1429 runs so far in CPL T20,

Brandon King is a dangerous player for any opponent as he can turn the game towards his side on the back of his brilliant batting skills.

A left-handed top-order batsman who played 25 matches in CPL and scored 664 runs. S Hetmyer is very good to pick in Dream11 Team.

Nicolas Pooran is quite a talented middle-order batsman that can win any game for his team. He has shown some glimpses of his excellent form in CPL with his willow. He has scored 1036 runs in 64 innings for GUY.

He has scored 336 runs and grabbed 23 wickets. He can turn out to be an excellent and match-winning pick for a fantasy team.

Imran Tahir is a talented bowler turning out to be a difficult one to pick for a batsman when batting. Thus far, he has dismissed 32 wickets in 21 games.

Nazir is a talented middle-order batsman, who has worked hard and scored a bundle of runs for his team with the bat. He can play some quick knocks from the lower batting order that sometimes turns out to be the difference between winning and losing.

The Dream11 team will be updated on our Telegram ⇒ JOIN NOW.