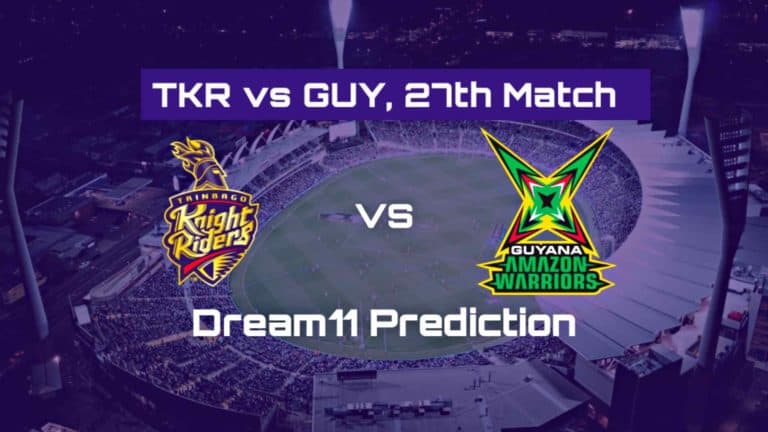 TKR vs GUY Dream11 Prediction, match preview and probable playing XI of the 27th match of CPL 2019. Guyana Amazon Warriors will take on the Trinbago Knight Riders in the twenty-seventh T20 of Carribean Premier League 2019 at Queen’s Park Oval in Trinidad.

After a dream starts to the season winning four encounters on the trot, Trinbago Knight Riders have been unable to get a victory in last three meetings with one being washed out due to rain and one being lost in super over. Their batsmen are in excellent form but have not got enough support from the bowlers who have the entire lackluster season.

In the last match, They lost to Barbados Tridents by 63 runs. Bowling first, Kieron Pollard and Khary Pierre struck twice to restrict Tridents at 192. In the chase, No batsmen could tackle the spin attack of Tridents and collapse on 129 runs. Darren Bravo and Colin Munro were the only positives from batting department scoring 28 and 23 runs in losing cause for the team. They will hope to regain the momentum and give a tough challenge to mighty Guyana Amazon Warriors.

Table-toppers Guyana Amazon Warriors have an undefeated run in CPL 2019 winning all the seven encounters. Their batsmen, as well as bowlers, are performing consistently for the team and are giving their best effort in every match.

They won their last encounter against St Lucia Zouks by eight wickets. Bowling first, Ben Laughlin took three wicket-haul while Imran Tahir struck twice to restrict Zouks at 161. In the chase, Brandon King played another gem of a knock scoring 81* runs in just 59 balls. Along with him, Chanderpaul Hemraj and Shoaib Malik also made handy contributions scoring 33 and 30* runs respectively. They will be eager to put another match-winning performance tomorrow against Riders.

In the first leg of CPL’19, three encounters were played at this venue with an average total between 160-170. Batsmen can go all guns blazing once they are set on this track while Pacers can also extract support from the pitch in the initial overs. You can prefer more batsmen and good death bowlers in your Dream11 team.

Sunil Narine can be a match-winner in either of the departments. He scored 46 runs and took two wickets in one match and has made handy contributions in other games also. In the last encounter too, He scored attacking 19 runs and took one scalp along with a maiden.

Keiron Pollard is in excellent form and performed well in IPL, Canada T20 league and T20 series against India. He scored attacking knocks of 47, 33*,26*, 45* and 19 runs in five encounters and also took three scalps in last two matches.

Lendl Simmons is an attacking opener and has the potential to play big knocks. He scored 63, 86, 90 and 11 runs in the last four matches and is in brilliant form.

Colin Munro is an outstanding T20I batsman and was the top scorer of CPL 2018 and continued his similar run this season too with an unbeaten 96, 28 and 23 runs knock in three matches.

Jimmy Neesham is one of the best all-rounders in world cricket currently. He scored 33 runs in the first match and has taken nine wickets in six games. He has failed to perform from the last three games.

USA Pacer Ali Khan is a good bowler of T20 format and can be a good option in the bowling category. He took three scalps in last three matches but failed in the previous encounter.

Khary Pierre is a talented spinner and performed exceptionally well in CPL 2018. He took two scalps in the last match and can perform well in the second innings when pitch slows down.

Shoaib Malik has got the start in almost all the matches and can also spin the ball if needed. He scored 67* runs in third last match and also bowled the most economical spell of CPL’19 in the second previous game.

Shimron Hetmyer is an attacking batsman. He scored a quick cameo of 70 and 44 runs in two matches.

Nicholas Pooran is in very consistent form, and scores run in almost all the matches. He scored attacking 61*, 18* and 20 runs in the last three games he came to bat.

Chris Green is a competent spinner and can pick wickets in every match for the team. He can also bat well in a tough situation for the team. He took seven scalps in last four games including four wicket-haul in the second previous match.

Imran Tahir is a brilliant spinner and can be lethal on slow wickets. He took eight scalps in four matches.

Romario Shepherd is a lethal pace bowler and took nine wickets in six matches. He can also bat well, and score runs in a quick interval.

If you liked Trinbago Knight Riders vs Guyana Amazon Warriors Dream11 Prediction, then follow us on Twitter for Dream11 Team and Fantasy Cricket Tips. You can also find us on Facebook.