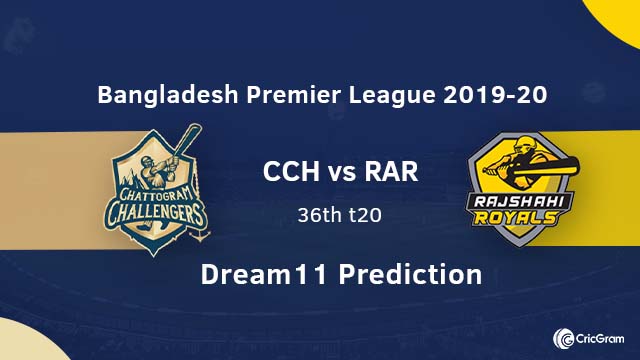 They are second in the points table just behind Royals with similar seven wins and three losses. In the last match, They defeated Khulna Tigers by six wickets.

Bowling first, Pace trio of Mehedi-Rubel-Kesrick bowled lethal spells taking eight scalps among them with three each to Mehedi Hasan Rana and Rubel Hossain. Thus, restricting Tigers at just 121. In the chase, Openers Siddique and Simmons scored good knocks of 38 and 36 runs respectively while Imrul Kayes remained unbeaten at 30* to ensure easy chase of the target. They will hope to give a tough challenge to the Royals and get a victory tomorrow.

Table-toppers Royals have won seven out of their ten encounters and have a very well-balanced squad. They won their last match against Sylhet Thunder by six wickets.

Bowling first, Alok Kapali struck twice while Nawaz, Irfan, and Abu Jayed also bowled well to restrict Thunder at 143. In the chase, Afif Hossain and Liton Das were brilliant at the top scoring 46 and 36 runs while Malik and Nawaz did the rest to ensure another victory for the team. They will hope to put a similar unison effort tomorrow against Challengers.

A good track is likely to be on offer with advantage to batsmen as well as bowlers.

Dew factor is also likely to play a role during second innings making chasing side favorite.

Lendl Simmons: Experienced Simmons can be a match-winner on his day and proved in the last two matches scoring 54 and 36 runs.

Chris Gayle: Universal Boss is all set to feature in BPL tomorrow and averages above 40 in this league. His recent form and fitness is not upto mark but still can be a match-winner on his day.

Imrul Kayes: Kayes is in good touch in this season with 319 runs in eight encounters including 54* and 30* runs in the last two matches.

Chadwick Walton: He is an attacking batsman and has scored 256 runs in nine matches at an attacking strike rate. However, He has failed to perform in recent matches.

Mehedi Hasan Rana: Pacer Rana is the leading wicket-taker of BPL’19-20 till now with 17 scalps in eight encounters. He will be the best budget pick in CCH vs RAR Dream11 team.

Rubel Hossain: He is a lethal pacer and has performed well this season taking thirteen scalps including two and three wicket-haul in the last two matches.

Kesrick Williams: He is a wicket-taking pacer and struck twice in the last match. He can also score few runs with the bat.

Liam Plunkett: This English Pacer has plenty of variations and should be a part of your fantasy team if he plays tomorrow. His recent form is poor.

Ravi Bopara: Veteran Bopara is in very good form recently and is making important contributions with the bat as well as the ball. He has scored 191 runs in seven innings including unbeaten fifty in the second last match and has also taken eight scalps.

Afif Hossain: Talented youngster Afif will open the innings and has scored 76, 43, 31, 32 and 46 runs in five of the last six innings. He is also a genuine wicket-taking option with the ball and struck twice in the second last match.

Shoaib Malik: Malik was in excellent touch during CPL’19 and continued his form in BPL scoring 281 runs including 61 run knock. He is also performing well with the ball and struck twice in the second last match.

Liton Das: He is an attacking opener and has scored 291 runs in ten innings including 36-run knock yesterday.

Mohammad Nawaz: Pakistan spin all-rounder Nawaz has the potential with bat as well as ball and gave a display of the same in the two matches scoring 15*,17* runs and taking two scalps.

Andre Russell: World’s best all-rounder Russell is leading the team from the front scoring quick runs with the bat and taking crucial scalps. He has taken eleven scalps till now and also scored 7 ball-17 runs in the last match he played. If fit, He will come back in the playing XI.

If you liked Chattogram Challengers versus Rajshahi Royals Dream11 Prediction, then follow us on Twitter for Dream11 Team and Fantasy Cricket Tips. You can also find us on Facebook.