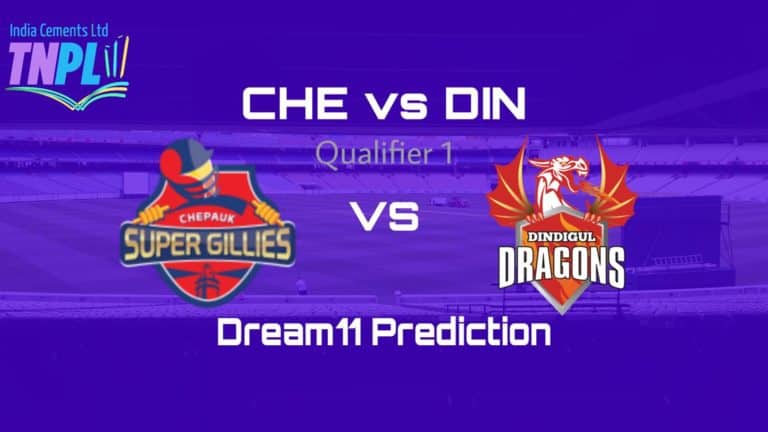 Chepauk Super Gillies and Dindigul Dragons will face-off in the first qualifier of Tamil Nadu Premier League 2019 at Tirunelveli. We will provide CHE vs DIN Dream11 Team Prediction, Preview and Probable Playing XI for the match.

Chepauk Super Gillies are second on the points table with five wins and two losses. They won their last match against Tuti Patriots by 32 runs. Batting first, Gopinath scored crucial knock of 53 runs and was supported by U Sasidev to take the team to a total of 127. Defending the target, Pace trio of Harish Kumar, Shankar and Periyaswamy took seven scalps among them while M Siddharth took two wickets to restrict Patriots at 95 runs. They will hope to put a similar unison effort against mighty Dindigul Dragons and qualify to the finale of TNPL 2019.

Dindigul Dragons ended on the top of the points table with six wins and one loss. They got their first defeat of the season in the last encounter losing to Lyca Kovai Kings by 35 runs. Bowling first, B Praneesh took three-wicket haul while Ramalingam Rohit took two scalps to restrict Kings at 134. In the chase, In-form openers got out on duck resulting in a 35-run defeat for Dragons. S Sujay and M Mohammed scored 34 and 19 runs in losing cause for the team. With key players expected to return after rest, Dindigul Dragons will hope to be the first team to qualify for the finale.

Pitch is quite slow and will be challenging to put on a big score. Bowlers are expected to have the edge over batsmen.

However, If they used the new pitch, then it can support batsmen.

Other Options: U Sushil, A Aarif

U Sushil played his first encounter in the last match and scored just one run. He is not an excellent Dream11 team of small leagues.

A Aarif got out on a duck in second last match and got replaced. He can play tomorrow.

Skipper Kaushik Gandhi will lead the Chepauk Batting unit from the front, and this technically strong batsman. Kaushik scored his first fifty of TNPL 2019 in third last match.

R Vivek is an attacking middle-order batsman. He scored attacking 29 and 26 in two matches.

U Sasidev is an average batsman and can be demoted or promoted as per the need of a match. He scored 41, 51 and 27 runs in last three games.

NS Chaturved is a good batsman. He scored 21 and 20 runs in two matches, can play this match.

S Sujay played his first encounter in the last game and scored 34 runs.

Sumant Jain will bat in the middle order. His position can be risky.

Vijay Shankar is one of the emerging allrounders in the Indian team and has the potential to contribute in both the departments. He took two scalps in the last match.

S Harish Kumar has taken scored attacking 53* and 23 in the two matches. He has also taken thirteen scalps in last four games and will be a must pick in DIN vs CHE Dream11 team.

Skipper Ravichandran Ashwin is one of the best all-rounders in TNPL. He scored 52 runs in one match and took three and two wicket-haul in two games. He is likely to play tomorrow.

Murugan Ashwin is a good allrounder. He is a witty leg spinner and has played in IPL also. He has scored 46 runs till now in TNPL 2019 and has taken seven scalps.

R Rohit will bat in the lower middle order and will bowl a few overs of medium pace also. He took two-wicket haul in the last match and is in excellent bowling form.

G Periyaswamy bowled good spell in all of the matches. He took ten scalps in the last five encounters.

M Mohammed is a lethal pacer. He can also be handy with the bat, but He has not performed as per expectations in TNPL 2019.

R Alexander is a brilliant spinner and proved it by taking three and four scalps in the first two encounters. He bowled well in the last match and took one scalp.

Abhinav Mohan is a talented allrounder and can be effective with his spin bowling. He can also do late hitting. He took three-wicket haul in second last match.

M Silambarasan is a brilliant spinner. He proved his talent taking four wicket-hauls in two matches also took one scalp and bowled one maiden in second last match.

M Siddharth can be a good allrounder. He can bowl four overs of spin and can also be handy with the bat. He took two scalps in the last match.

Other Options: B Praneesh, J Koushik

Experienced pacer J Koushik can be lethal on his day. He can return in the playing XI tomorrow.

If you liked Chepauk Super Gillies vs Dindigul Dragons Dream11 Prediction, Then follow us on Twitter for Dream11 Team and Fantasy Cricket Tips.