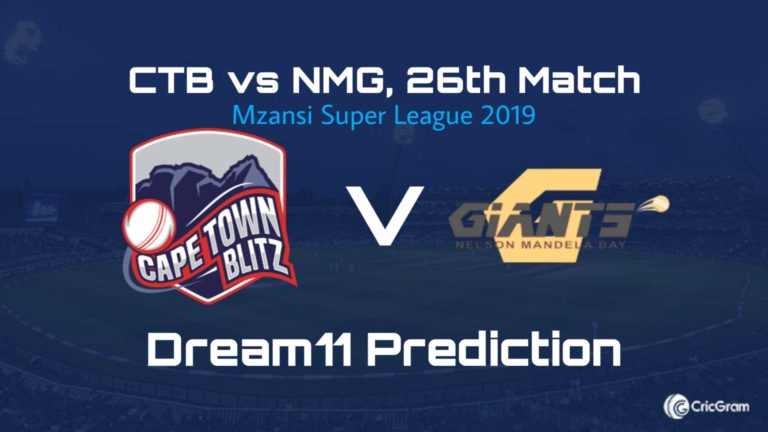 Cape Town Blitz has played well this season but hasn’t been able to win as many matches as they would have wanted to. They are 2nd last in the points table with 4 wins and 4 losses and with a total of 17 points. But in the last game, they performed really well against Tshwane Spartans and defeated them by 15 runs.

In the last match, Batting first Cape Town Blitz wasn’t able to score easily but they managed to put up a fighting total of 157 runs. Janeman Malan’s 36 and Bedingham’s 53 runs helped in putting up that total. But their bowling was extremely good. It was Dale Steyn again who picked up three wickets just for 10 runs in his 4 overs and Wahab Riaz joined the destruction by picking up two wickets for 18 runs. They will be hoping to continue their winning momentum against the Nelson Mandela Bay Giants.

Nelson Mandela Bay Giants are first on the points table with five wins and one loss. They won their last match against Tshwane Spartans by 6 wickets.

Bowling First, Bay Giants gave away too many runs to the Spartans, It was Tahir who controlled the runs by giving 28 runs in his 4 overs and picked up 2 wickets. Hendricks, Chris Morris, and Junior Dala picked up a wicket each.

In the Chasing Bay Giants lost an early wicket and kept on loosing wickets pretty quickly but Ben Dunk held on to his inning and played a match-winning knock of 99 runs which was helped by the innings of Ryan ten Deschate’s 33 and Marco Marais 38 runs. They would want to win their next match against Cape Town Blitz and hold on to the No.1 Spot.

It is a track that provides great help for bowlers and a lot of wickets have been taken at this pitch but also plenty of runs have been scored. So it is most likely to be a see-saw kind of pitch.

2 of the 4 encounters at this venue this season have been won by Cape Town Blitz and they would want to perform really well in this match and put up a nice show for their home crowd.

Though they have won the last match they lost some early wickets so they would want to have Jason Roy back into to team and there is a chance that he might replace Mathew Breetzkee as Ben Dunk playing very good as an opener.

Quinton de Kock: He is the captain and opener for Cape Town Blitz and is known for scoring runs pretty quickly. He has scored a total of 204 runs from 8 innings this season.

Janeman Malan: He opens the inning alongside de Kock and can play big shots and also play big innings if he gets a good start. He has played some match-winning knocks. He has scored a total of 299 runs from 8 innings which involve scores like 99,75 and 36

Dale Steyn: Dale Steyn is in tremendous form this season and is the leading wicket-taker with 15 wickets to his name and with an average of 15.13. He is a must pick in your Dream 11 team for CTB vs NMG match.

Wahab Riaz: He is bowling all-rounder and has picked up 6 wickets and scored 45 runs in six innings this season. He can do some big hitting down the order if needed.

David Bedingham: He bats one down for his team and has got the chance to pretty lately but he has ensured his place in the playing XI by scoring 44 and 53 runs in the two innings he played.

Sisanda Magala: He is the attacking bowler along-side Steyn and has picked up 10 wickets this season for his team and almost picks up a minimum of 1 wicket every match.

Ben Dunk: Aussie wicket-keeper batsman Dunk has performed well this season scoring 278 runs in 7 innings and has scored 99* in the previous match.

JJ Smuts: Skipper Smuts is a brilliant all-rounder. He has scored runs in 5 innings and also has taken 4 wickets. He will be a must-pick in CTB vs NMG Dream11 team.

Chris Morris: Pace all-rounder Morris has the talent to be a match-winner with the bat as well as the ball. He has taken 7 wickets and also scored 76 runs that too at a very good strike rate.

Imran Tahir: Veteran spinner Tahir is a wicket-taking bowler and has taken 12 scalps in four matches at an average of 15.00.

Jason Roy: He is an attacking batsman and can hit big sixes. He hasn’t been consistent but once he gets going it is really difficult to stop him. He has hit a 50 in this season. If plays Roy is good to pick in CTB vs NMG Dream11 Team.

Junior Dala: He is a lethal pacer and can also do late hitting if required. He has taken 11 scalps but has gone for many runs in seven matches that he has played.