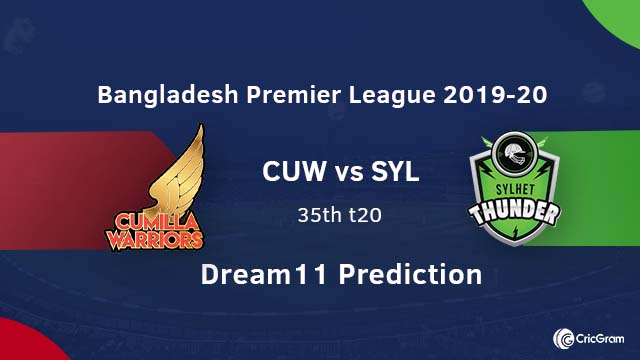 Warriors are ranked fifth on the points table with four wins and five losses. To make it to the next stage, they have to perform at their best level in the remaining three matches.

They won their last match against Sylhet Thunder in a super over. Batting first, Upul Tharanga scored 45 runs to take the team to a below-par total of 140 but performed exceedingly well with the ball to tally the scores. Mujeeb took four wicket-haul while Al-Amin Hossain struck twice for the team. In super over, Mujeeb restricted Thunder on seven runs, which was chased comfortably by David Wiese.

They are on the bottom end of the points table with just one win in eleven matches and have struggled to perform throughout the tournament. In the last game, they lost to Rajshahi Royals by six wickets.

Batting first, Sylhet Top-order had another poor outing and were limping on 68/3 after twelve overs, but crucial knocks of 47 and 25 from Mithun and Rutherford surged them to an average total of 143. In defense, Delwar Hossain struck twice while Rutherford also bowled well but could not save the team from another disappointing loss. They will hope to provide a moment of joy to the fans in their last encounter of BPL’19.

A neutral track awaits both teams with good support to batsmen and bowlers.

Batsmen once set can anchor big innings while spinners and pacers can also utilize their skills to get some wickets.

Soumya Sarkar: He will bat in the middle order and also bowl a few overs of medium-pace. He has taken eleven scalps in nine matches and also scored attacking 88* runs knock in third last match.

Mujeeb Ur Rahman: Afghan spin master Mujeeb has taken thirteen scalps in nine matches and is looking in good form. He can be a good pick in CUW vs. SYL Dream11 team as he took four wicket-haul in the last head-to-head encounter.

Upul Tharanga: Veteran Sri Lanka opener Tharanga is an attacking batsman and came all guns blazing in his first match of BPL’19, scoring 45 runs from 31 balls.

David Wiese: Kolpak all-rounder Wiese is in excellent form recently and can be the best choice for captain in grand leagues tomorrow. He scored 15 runs and took one scalp in the last match.

Al-Amin Hossain: Pace bowler Al-Amin is a consistent performer with the ball and has taken ten scalps till now.

Stiaan Van Zyl: He is an average batsman and can be a grand league pick for tomorrow. He scored 22 and 10 runs in the last two matches.

Sabbir Rahman: He will bat in the middle order and is in the inferior form currently. It is better to avoid him in small leagues.

Sherfane Rutherford: He is an attacking yet reliable lower-order hitter and can also bowl a few overs of medium pace. He scored 38*, 26*, 16, 15, 60, and 25 runs in his six matches till now and also took three wicket-haul in third last match.

Andre Fletcher: Opener Fletcher can be a match-winner once set and has scored 233 runs till now in eight innings but got out on 0, 1, 19, and 25 runs in the last four matches.

Mohammad Mithun: He has scored 331 runs till now and has been a consistent performer for Bangladesh team. Mithun scored 47 runs in the last match.

Johnson Charles: Windies power hitter Charles is in good form presently scoring 270 runs in nine matches but has failed to perform from past few matches.

Ebadot Hossain: He is a talented pacer and has taken twelve scalps till now, including five scalps in the last three matches. His economy has also been at the lower side.

Naveen-ul-Haq: Afghan pacer Naveen is a talented bowler and should be a part of your fantasy team if Thunder bowl first.

Mosaddek Hossain: Skipper can play crucial knocks in the middle order along with the part-time spin. He has scored 200 runs till now and can be a right choice as captain in grand leagues if he plays tomorrow.

If you liked Sylhet Thunder versus Cumilla Warriors Dream11 Prediction, then follow us on Twitter for Dream11 Team and Fantasy Cricket Tips. You can also find us on Facebook.