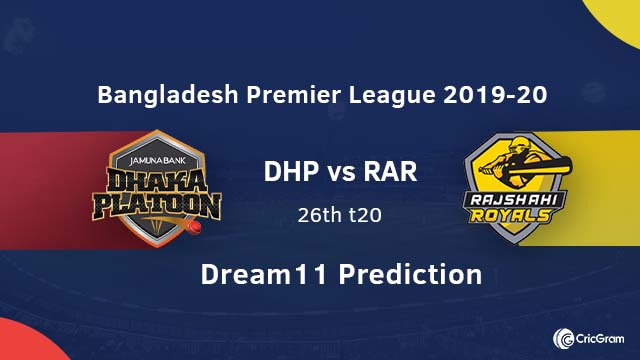 Dhaka are in the middle of the points table with four wins and three losses. Their last two defeats came against Chattogram Challengers with the latest being in the last match by 6 wickets.

Batting first, Mominul Haque and Tamim Iqbal failed to put a good knock after getting starts scoring 32 and 21 runs. Late cameos from Wahab Riaz and Mortaza surged Platoon to a below-par total of 124. In defence, Speedster Wahab struck twice while Mahedi and Mortaza bowled good spells taking one scalp each but was not enough to prevent Challengers from chasing the target. They will hope to give a tough challenge to mighty Royals tomorrow.

They are second in the points table with five wins in six matches and have a very well-balanced squad. In the last match, They defeated Cumilla Warriors by 15 runs.

Batting first, Afif Hossain and Liton Das were good at the top scoring 43 and 24 runs while Shoaib Malik was at his former best scoring 61 runs from just 38 balls. Skipper Russell also played late cameo of 37* runs to take team to a total of 190. With ball, Russell-Reza-Malik-Irfan took one scalp each to ensure successful defence of the target. A similar all-round performance will be expected from Royals in the upcoming matches.

A neutral track awaits both teams with fair support to batsmen and bowlers.

Spinners and Pacers with variation can trouble batsmen by taking advantage of slowness of the track.

Tamim Iqbal: Star opener Tamim played match-winning knock of 60* runs in second last match and will be a must-pick in your fantasy team despite of his inconsistent form.

Mahedi Hasan: All-rounder Hasan has been tremendous at the top scoring attacking fifties in two matches and is also a consistent performer with the ball. He can be a good choice of captain or vice-captain.

Thisara Perera: He is an experienced all-rounder and played attacking knocks of 42, 22 and 47 runs in three matches along with a five-wicket haul. However, He failed miserably in the last match.

Wahab Riaz: He can be lethal with his pace and can lay havoc on his day. He is also a brilliant finisher and scored 23 runs in the last match along with two scalps.

Shadab Khan: Spinner Shadab can fetch you enough points in your Dream11 team with his all-round skills. However, His recent form is very poor. He can be a good grand league pick tomorrow.

Andre Russell: World’s best all-rounder Russell is leading the team from front scoring quick runs with bat and taking crucial scalps. He has taken ten scalps till now and is second on the list of top wicket-takers.

Ravi Bopara: Veteran Bopara is in very good form recently and is making important contributions with bat as well as ball. He has scored 103 runs in four innings along with seven scalps.

Liton Das: He is an attacking opener and has scored 211 runs in six innings.

Shoaib Malik: Malik was in excellent touch during CPL’19 and continued his form in Bangladesh Premier League scoring 217 runs including 61 run knock in the last match.

Afif Hossain: Talented youngster Afif got the opportunity to open in the last two matches and ended up scoring 76 and 43 runs. He is also a genuine wicket-taking option with the ball.

Mohammad Irfan: Pakistan pacer Irfan struck twice in the second last match and can be a good pick in your fantasy team. He is in good bowling form currently.

Alok Kapali: Spin all-rounder Kapali has got four scalps till now and can also perform with bat if needed.

The final team will be updated on Cricgram Telegram ⇒ Subscribe Now

If you liked Rajshahi Royals  versus Dhaka Platoon Dream11 Prediction, then follow us on Twitter for Dream11 Team and Fantasy Cricket Tips. You can also find us on Facebook.