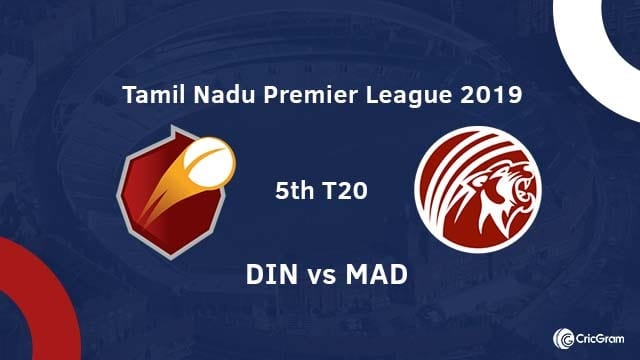 Dindigul Dragons and Madurai Panthers will face-off in the 5th encounter of Tamil Nadu Premier League 2019 at Tirunelveli. We will provide DIN vs MAD Dream11 Team Prediction, Preview and Probable Playing XI for the match.

Dindigul Dragons got an excellent start to the season defeating Chepauk Super Gillies by ten runs. Batting first, Ravi Ashwin scored attacking knock of 37 runs and was supported by Chaturved and Jagdeeshan to take the team to a below-par total of 115. In defence, all bowlers bowled brilliantly to defend the low target. M Silambarasan took four wicket-haul while J Koushik and M Mohammed took two scalps each to ensure a 10-run victory for the side. A responsible effort will require from the batsmen will be expected tomorrow to defeat mighty Madurai Panthers.

Reigning champions Madurai Panthers got a dominating victory in the opening encounter defeating TUTI Patriots by nine wickets. Bowling first, R Mithun and Kiran Akash starred with the ball taking three scalps each to restrict Patriots at 124. Chasing the target, Arun Karthik single-handedly chased the target scoring 65* runs in 42 balls and was supported by A Sarath Raj to ensure a comfortable victory for the team. They will be eager to continue the winning momentum ahead defeating Dindigul Dragons.

Between MAD vs DIN is expect a good contest.

N Jagadeesan is one of the best batsmen of TNPL and stays in good form. He scored 396 runs in last season and will be a must-pick in your team. He scored 17 runs in the previous match.

N Subramanian will bat at one down for Panthers. He is a technically strong batsman.

Skipper A Karthik was the top-scorer for last season and continued his form scoring attacking 65* in the previous encounter. He will be a must-pick in MAD vs DIN Dream11 team.

C Hari Nishaanth will open the innings and can also bowl a few overs. He scored 250 runs in last season and can be a good pick in DIN vs MAD Dream11 team.

A Sarath Raj will open for Panthers and scored good knock of 33 runs in the first match.

NS Chaturved is a good batsman and scored 21 runs in the first match of TNPL 2019.

S Chandran is a good and technically reliable batsman. He did not get a chance to bat in the last encounter and can be a good option in batting category.

R Vivek is an attacking middle-order batsman. He scored 262 runs in TNPL 2018. Vivek failed in the opening encounter.

Sumant Jain gave a glimpse of his attacking batting style in the last encounter but could only score 10-runs. He will be eager to fire tomorrow.

Skipper Ravichandran Ashwin is the best all-rounder in TNPL. He will bat at one down and will also bowl his quota of overs. His recent form in IPL and County Cricket is also excellent. He scored 37 runs in 19 balls in the opening encounter.

J Kousik failed miserably with the ball in first encounter giving 20 runs in his only over. However, He is a handy all-rounder and can contribute to both the departments.

Spin all-rounder Rahil Shah can take crucial scalps with the ball and can also be handy with the bat.

R Rohit will bat in the lower middle order and can bowl a few overs of medium pace also.

M Mohammed is a lethal pacer and will be crucial for the hopes of Dindigul Dragons. He took two wickets in the first match.

M Silambarasan is a competent spinner. He proved his talent in the first match taking four scalps in just three overs.

Abhishek Tanwar is also a good pace bowler and can be a smart pick in DIN vs MAD Dream11 team. A Tanwar even bat.

R Mithun is a right-arm off-break bowler and took three scalps in the first match.

Abhinav Mohan took eight wickets in the last edition and is a competent spinner. He can also be handy with the bat.

Kiran Akash bowled exceedingly well in opening encounter taking three wicket-haul. He is a lethal pacer and can change the course of the match.

Jagannathan Kaushik is also a good pace bowler and took two scalps in the last match.

Other Options: A Sumra, L Raj

A Sumra is a right-arm pacer. He failed to perform in the first match.

Lokesh Raj can also be a good option in the bowling category and can bowl a few overs of medium-pace.

If you liked Madurai Panthers vs Dindigul Dragons Dream11 Prediction, Then follow us on Twitter for latest cricket news and playing XI.