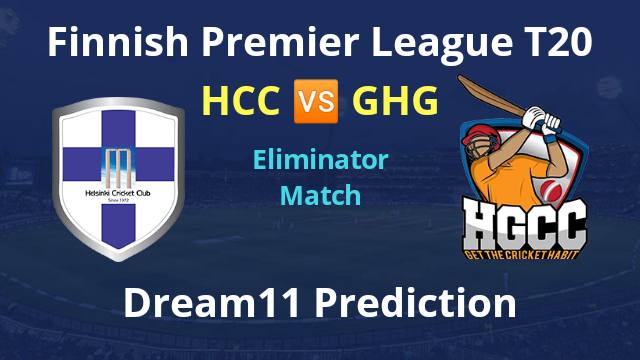 HCC ended in the third position in the league table of Finnish Premier League 2020. They did perform brilliantly in all aspects of the game due to which they managed to churn out success in this T20 tournament. Now, they will be fully charged up for the eliminator against Gym Helsinki Gymkhana.

HCC has a strong team with some decent batsmen and extremely brilliant bowlers in their ranks. Earlier, they have defeated the same opponent by a margin of five wickets. So, they will be confident enough to grab a victory to advance into the next stage of the tournament.

GHG finished in the fourth position with six victories in 14 games of the tournament. They have a well-furnished team. But, they also lack in performing with consistency. GHG lost a game in their last outing and will look to get back on the winning track in the next.

It will be a crucial game for their team, who have worked quite hard throughout the long Finnish Premier League 2020. Also, they looked like the underdogs, who emerged as the biggest surprise for their opponents. They did outclass some brilliant teams, that were reckoned as the contender of the title in the early part.

Ghulam Abbas Butt has scored almost 200 runs and taken 10 wickets in 9 matches. He is performing at his best with bat and ball. He should be picked in a fantasy team looking forward to his fine form.

Abdul Ahad Qureshi is currently the leading run-scorer for Helsinki Cricket Club. Also, he is quite a handy bowler, who has grabbed five wickets in 11 outings.

In the fag end of Finnish Premier League 2020, Aniketh has regained his fine batting form. He is a big plus for HCC, who has produced some match-winning performances. Until now, he has managed 262 runs in 11 games with 6 wickets in his kitty.

Z Kamal is an amazing bowler that can win the game for HCC on the back of his game-changing bowling. He has grabbed 11 wickets in 10 matches. In the last game also, he grabbed three-for while bowling against SKK.

The team management did not pick him in the previous game. However, his fantastic form with the bat cannot be ignored going ahead in the eliminator. So far, he has scored 134 runs in 8 outings.

He has become quite lethal with the ball, and batsman finds it difficult to smack him for boundaries. If HCCC wants to outclass GHG, he will have to come out with an impressive show with the ball.

He has contributed brilliantly with his batting performance in the successful campaign for HCC. Till now, he has scored 167 runs in 10 innings.

He is an impactful bowler, who has taken 6 wickets in 7 outings. Maneesh has bowled brilliantly at a low economy rate that builds pressure on the opponent during the games.

He is an amazing all-rounder who has done a brilliant job with the bat and ball. Pankaj has done exceedingly well with his performances in this tournament. Till now, he has scored 217 runs and grabbed 8 wickets in the tournament.

Ghawas has established himself into a wicket-taking bowler for GHG in the ongoing tournament. Ghawas has grabbed 20 wickets in 13 outings. Also, he has edged out 102 runs with his willow.

Faisal Shahzad is turning out to be a game-changer for GHG. He is expected to come out all-guns-blazing with his performance in the eliminator. In this season, he has scored 72 runs and grabbed 20 wickets.

Jaleel Ahmad is a dangerous bowler, who has turn games in favor of his tea with his skillful bowling. Thus far, he has managed 13 wickets in 10 games.

He is the leading run-scorer for GHG in the ongoing T20 tournament. If he gets going, it will become quite difficult for the opponent to stop Gym Helsinki Gymkhana. Saif is a top-order batsman, who has scored 327 runs in 9 games.

Javed Jan Abdul has bowled quite effortlessly with discipline in this Finnish Premier League. He can be an add on in any of the Fantasy sides on the back of his brilliant bowling.

He is a definite middle-order batsman, who can be used as a floater. Simranjeet has done a great job with his willow. The batsman above would be expected to click a good knock with his bat.