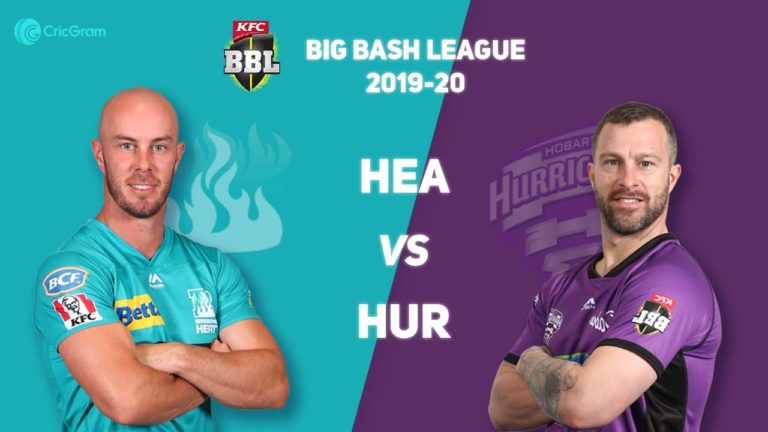 Brisbane Heat will take on Hobart Hurricanes in the 29th match of Big Bash League 2019-20 at The Gabba, Brisbane. We will provide HEA vs HUR Dream11 Prediction, Probable Playing XI, and Fantasy Cricket Tips.

In the last head-to-head encounter between these two teams, Brisbane Heat won the match by 31 runs.

Brisbane Heat would be somewhat relieved as they managed to win their previous 2 games and are currently at 5th position on the points table with 3 win and 3 losses and a total of 6 points.

The last match played by Brisbane Heat was reduced to 8 overs per side due to rain. Batting first, Tom Banton and Chris Lynn played a destructive inning by scoring 56 and 31 runs, respectively. They scored 90 runs in just 5 overs and lost the wicket of Tom Banton. After two balls, Lynn also got out, and the scoring rate of Heat declined, and they managed to score a total of 119 runs at the end of 8 overs.

With 119 runs to defend, Brisbane Heat bowled well. They picked up a wicket in the 2nd over and also contained runs. In the 3rd over, they picked up a wicket but again the match was stopped due to rain. The game started after a slight delay, and the opposition was given a target of 55 runs in 17 balls, which was a tough task. Brisbane Heat won that match by 16 runs. Jack Prestwidge picked up 2 wickets, Zahir Khan and Ben Laughlin picked up 1 wicket each.

They would be confident after winning to consecutive matches and continue their winning momentum by winning the game against Hobart Hurricanes.

Hurricanes had to face disappointment in most of the matches in this season. They currently at 7th position on the points table with 3 wins and 3 losses and a total of 6 points.

In the last match, batting first Hurricanes started their innings slow but steadily. They scored 66 runs in the first 10 overs without losing any wicket. But in the 11th over, they lost the wicket of Caleb Jewell, who got out after scoring 25 runs. After that, Miller came to bat and scored 15 runs and got out in the 16th over. But Hurricanes batted brilliantly in the death overs and scored 56 runs in the last 5 overs. Ben McDermott scored quick 20* runs from 12 balls, but the star of the match was D’Arcy Short, who scored 103* runs from 70 balls and helps the Hurricanes post a total of 180 runs.

With 180 runs to defend, Hurricanes bowled very well as they picked up 3 wickets in the power play and gave away just 41 runs. They got another breakthrough in the 13th over and kept on picking up wickets at regular intervals. In the end, they gave away runs but managed to defend the total and won the match by 8 runs.  Scott Boland and Nathan Ellis picked up 2 wickets each, Qais Ahmad, Thomas Rogers, and Riley Meredith picked up 2 wickets each.

Hurricanes would want to forget the previous encounter against the Heat and try to win this match against them.

The pitch is generally considered to be fast and bouncy. Batsmen can also score runs if they can adapt to bounce and pace.

✅- Captain Wade is welcomed back into the squad.

❌- Meredith out with Injury

❌- Short out for ODI duties.

Chris Lynn:
Skipper Lynn is a destructive batsman and is known for his big shots and massive strike. He played brilliantly in the last match and scored 31 runs from 13 balls. He has scored a total of 242 runs this season. Lynn is an excellent Captain or Vc choice for HEA vs HUR Dream11 Team.

Tom Banton:
The 21-year-old wicket-keeper batsman opens the innings for Brisbane Heat and is a good striker of the ball. He played brilliantly and scored 59 runs from just 19 balls in the last match and has scored a total of 154 runs this season.

Joe Burns:
He is a right hands batsman and can bowl a few overs of spin. Joe Burns will be playing his first match of the season. He has a decent record in the previous season of Big Bash League. He has a strike rate of 125.23 and an average of 28.73.

Matt Renshaw:
He is a very talented batsman and can also bowl 1-2 overs if required. He was out for a duck in the last match and has scored a total of 156 runs in this season.

Max Bryant:
He is an outstanding batsman and opens along with Tom Banton and scored 12 runs from 4 balls in the last match and has scored a total of 101 runs this season.

Ben Cutting:
He is an all-rounder who can hit some big shots down the order and bowl at a perfect pace too. He scored 18* runs and picked up one wicket in the last match and has scored 68 runs and picked up four wickets this season.

Mitchell Swepson:
He is a right-arm leg spinner for Heat and has picked up three wickets in the two innings he bowled.

Josh Lalor:
He is a left-arm medium-pace bowler and can pick up some early wickets. He went wicketless in the last match and a total of 5 wickets this season.

Zahir Khan:
He is a left-arm chinaman bowler and has the wicket-taking ability. He picked up one wicket in the last match and has picked up 6 wickets this season.

Ben Laughlin:
This pacer a bowls pretty well and can take some wickets in the death overs with his variations. He picked up one wicket in the last match for his team.

Mathew Wade:
He is a left-handed wicket-keeper batsman and had a perfect last season. Wade scored 592 runs in 15 innings. He played at a strike rate of 146.90 and with an average of 42.29. He will be playing his first match this season.

Ben McDermott:
He is both skipper and wicket-keeper batsman for Hobart Hurricanes this season. Skipper has scored 20 runs in the last match and has scored a total of 121 runs in this season.

Caleb Jewell:
He is the opener for Hurricanes and has batted sensibly in the last match and scored 25 runs. He has scored a total of 107 runs this season.

Qais Ahmed:
He is a very talented leg-spinner from Afghanistan. He managed to pick up 1 wicket in the last match and has bowled well in the other games and has picked up a total of 8 wickets this season. Qais Ahmed is the best to pick in HEA vs HUR Dream11 Team.

David Miller:
He is a very talented left-hand batsman and generally plays in the middle order. Miller is in poor form recently and was able to score 15 runs in the last match and has scored a total of 86 runs this season.

Nathan Ellis:
He is a bowling all-rounder and can score some handy runs down the order. He has performed decently so far in the tournament. In the last match, he picked up 2 wickets and has picked up a total of 5 wickets this season.

Scott Boland:
He is a right-arm medium-fast bowler and has played only one match this season. He managed to pick up 2 wickets in the last game.

If you liked Brisbane Heat vs Hobart Hurricanes Dream11 Prediction, then follow us on Twitter for Dream11 Team and Fantasy Cricket Tips. You can also find us on Facebook.