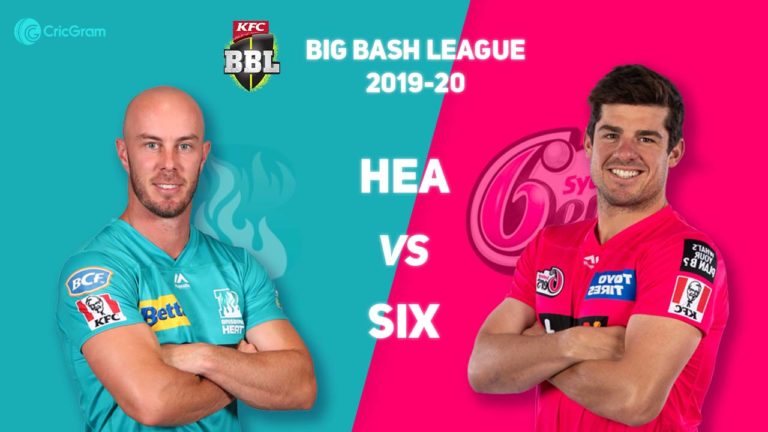 Brisbane Heat will take on Sydney Sixers in the 49th match of Big Bash League 2019-20 at The Gabba, Brisbane. We will provide HEA vs SIX Dream11 Prediction, Probable Playing XI, and Fantasy Cricket Tips.

In the last encounter between these two teams this season, Brisbane Heat won the match by 48 runs.

Brisbane Heat is having a tough time this season as they managed to win 5 out of the 11 matches that they have played and are currently at 6th position with 10 points on the points table.

In the last match, bowling first Heat picked up 1 wicket in the power play for 39 runs and kept bowling well by picking up wickets at regular intervals but in the end, they gave away runs and allowed the opposition to score a total of 164 runs for the loss of 6 wickets in 20 overs. Ben Laughlin bowled well and picked up 3 wickets for 31 runs in his 4 overs. Ben Cutting picked up 2 wickets and James Pattinson picked up 1 wicket.

With 165 runs to chase, Heat started their innings destructively as Sam Heazlett scored 56 runs from 37 balls and Chris Lynn scored 41 runs from 15 balls. They scored 84 runs in the power play and lost the wicket of Chris Lynn on the last ball of the power play but the damage was done and it was easy for the Heat to win the match from that point. Heat after starting their innings so well just lost the track and lost wickets in a very quick span and got all out for just 120 runs. They had lost 9 wickets for just 36 runs. Except for Lynn and Heazlett, no other batsman was able to perform in that match. They had to face a loss of 44 runs.

Heat would want to win their next match against the Sydney Sixers and stay in the competition for playoffs.

Sydney Sixers would be feeling good about the way they have performed so far in this season as they are currently at 3rd position on the points table with 7 wins and 4 losses and a total of 14 points.

In the last match, batting first Sixers started their innings slowly and after 3.1 overs, the match was interrupted due to rain and the match got reduced to 14 overs per side. In the 5th overs, they lost 2 wickets of Daniel Hughes and Josh Philippe who scored 14 and 10 runs respectively. Sixers were under pressure as they were 25 runs for the loss of 2 wickets after 5 overs. But after that James Vince 41* runs from 22 balls and Moises Henriques 72 runs from 31 balls batted brilliantly and helped Sixers post a total of 143 runs in 14 overs. But according to DLS rules, their total was made to 146 runs.

With 146 runs to defend in 14 overs, Sixers gave away runs in the beginning but picked up a wicket in the 4th over and after that, they bowled well and controlled the flow of runs. They picked up another wicket in the 10th over and made it tough for the opposition to score freely and picked up wickets in the death overs and restricted the opposition to a total of 125 runs. They won the match by 21 runs. Tom Curran and Ben Dwarshuis bowled well and picked up 2 wickets each. Nathan Lyon managed to pick up 1 wicket.

Sixers would want to win this match against Brisbane Heat and ensure a place in the playoffs this season.

Average first innings score: 143 (In the 4 games at the venue so far this season)

Average second innings score: 127 (In the 4 games at the venue so far this season)

The pitch at the Gabba expected to neutral. There are high chances of rain on the matchday along with thunderstorms, so there would be either reduction in the number of overs played or match may also get abandoned.

Chris Lynn:
Skipper Lynn is a destructive batsman and is known for his big shots and massive strike. He scored 41 runs from 15 balls in the last match and has scored a total of 332 runs so far in this season. Lynn is an excellent Captain or Vc choice for HEA vs SIX Dream11 Team.

AB de Villiers:
One of the world-class batsmen made his debut in the Big Bash League this season. ABD scored 2 runs in the last match and has scored a total of 45 runs so far in the two matches he played.

Marnus Labuschagne:
He is a right-handed batsman and hasn’t played much of Big Bash as he has played only 7 innings and scored 42 runs. But he looks in great form in the recent test and ODI’s he has played. He will be playing his first match this season.

Matt Renshaw:
He is a very talented batsman and can also bowl 1-2 overs if required. Renshaw was out for a duck in the last match and has scored a total of 261 runs so far in this season.

Ben Cutting:
He is an all-rounder who can hit some big shots down the order and bowl at a perfect pace too. Cutting picked up 2 wickets in the last match and has scored 143 runs and picked up 9 wickets so far in this season.

Josh Lalor:
He is a left-arm medium-pace bowler and can pick up some early wickets. Lalor went wicketless in the last match and has picked up a total of 11 wickets so far in this season.

Sam Heazlett:
He is an opening batsman for Heat and has played 5 matches in this season and scored 94 runs so far. In the last match he batted well and scored 56 runs.

Mujeeb Ur Rahman:
This 18-year-old right-arm off-spinner from Afghanistan has played several T20 leagues across the world. He has played two matches so far in this season, and he is yet to pick up a wicket.

Tom Curran:
He is a brilliant all-rounder. Tom is equally good with the bat as well as the ball. He picked up 2 wickets and scored 2 runs in the last match. Tom Curran has picked up 17 wickets and scored a total of 133 runs so far in this season. He is the best to pick in the HEA vs SIX  Dream11 Team.

Steve Smith:
One of the world’s top batsmen Steve Smith will be playing his first match this season and moreover he hasn’t played a single match after Big Bash season 3 and after 5 seasons he will be playing a match. He has played 20 matches and scored 499 runs and also picked up 6 wickets.

Josh Phillippe:
He opens the innings for Sydney Sixers and is a destructive batsman. Philippe scored 10 runs in the last match and scored a total of 288 runs so far in this season.

Daniel Hughes:
He is the opening batsman for Sydney Sixers alongside Josh Phillippe and is a very consistent batsman. Hughes scored 14 runs in the last match and has scored a total of 235 runs so far this season.

Moises Henriques:
Skipper is an all-rounder and is generally good at batting but can bowl a few overs of medium pace too. Henriques scored 72 runs from 31 balls in the last match and has scored 238 runs so far in the 10 innings he has played.

James Vince:
He is a very talented batsman and can play big innings for his team. In the last match, he scored 41* runs from 22 balls and has scored a total of 246 runs so far in this season.

Ben Dwarshuis:
This left-arm medium-fast bowler has bowled exceptionally well and has picked up 12 wickets so far in this season. He picked up 2 wickets in the last match.

Nathan Lyon:
The Australian right-arm spinner played 2 matches and picked up 1 wicket in the last match. He hasn’t played many matches in the Big Bash League. Lyon has played only 27 games so far and has picked up 36 wickets.

If you liked Brisbane Heat vs Sydney Sixers Dream11 Prediction, then follow us on Twitter for Dream11 Team and Fantasy Cricket Tips. You can also find us on Facebook.