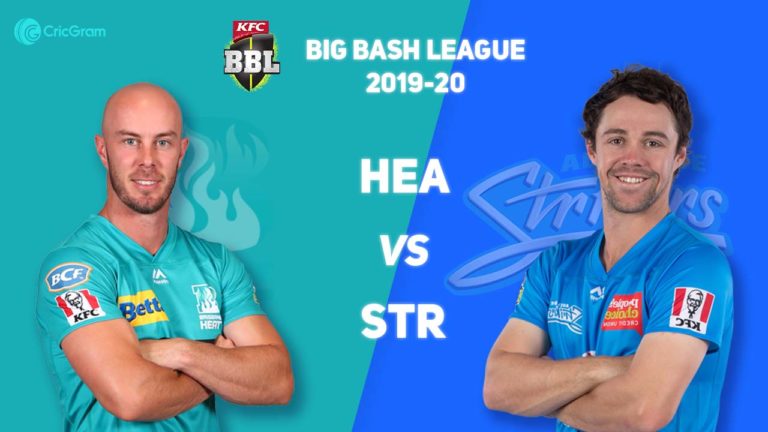 Brisbane Heat will take on Adelaide Strikers in the 36th match of Big Bash League 2019-20 at The Gabba, Brisbane. We will provide HEA vs STR Dream11 Prediction, Probable Playing XI, and Fantasy Cricket Tips.

Brisbane Heat is having a tough time this season as they managed to win only 4 out of the 8 matches that they have played and are currently at 5th position on the points table.

In the last match, Heat managed to pick up a wicket in the power play but gave away 63 runs. They managed to pick up 2 more wickets in the 7th and 11th over, but after that, Mitchell Marsh played brilliantly and took the game away from Heat. Opposition posted a massive total of 213 runs. Josh Lalor, Zahir Khan, and Ben Laughlin managed to pick up one wicket each.

With 214 runs to chase, Brisbane Heat started pretty well by scoring 65 runs in the power play for the loss of 2 wickets, but after that, they lost wickets at regular intervals and weren’t able to build a good partnership and managed to score 179 runs in 20 overs. They lost the match by 34 runs. Top scorers for Heat were Tom Banton 55 runs and Joe Burns 37 runs.

Heat would want to win their next match against Adelaide Strikers and climb up few positions on the points table.

Strikers were also having a tough time this season, but they made a comeback by jumping on to 3rd position by winning the last match. They have managed to win 4 of 8 games they played and acquired a total of 9 points.

In the last match, Strikers started their innings with a bang and scored 40 runs in just 3 overs. But they lost wickets of Philip Salt 18 runs and Jake Weatherald 27 runs in 4th and 5th overs. Travis Head played a decent inning and scored 22 runs but got out in the 8th over, but Jonathan Wells and Mathew Short batted brilliantly and scored 58 runs and 41 runs respectively and helped Strikers post a total of 173 runs in 20 overs.

With 176 runs to defend, Strikers picked up 2 wickets in the 1st and 2nd over and had put pressure on the opposition, but after that, they weren’t able to pick up wickets until the 10th over. After the 12th over, Strikers bowled well and picked up 6 wickets for just 24 runs and got the opposition all out for 110 runs and won the match by 63 runs. Peter Siddle bowled well and picked up 3 wickets. Travis Head and Rashid Khan picked up 2 wickets each. Michael Neser and Harry Conway picked up 1 wicket each.

After winning the previous match, Strikers would want to keep up their winning momentum alive by winning their next game against Brisbane Heat.

The pitch is generally considered to be fast and bouncy. Batsmen can also score runs if they can adapt to bounce and pace. There is 70% of the rain forecast on the match day. So there will be a reduction in some overs played. So far this season two-match had been played at this venue, Bowlers get help from the wicket.

Average 1st innings score: 166 runs (In the 2 games played so far this season).

Chris Lynn:
Skipper Lynn is a destructive batsman and is known for his big shots and massive strike. He scored 14 runs in the last match and has scored a total of 265 runs this season. Lynn is an excellent Captain or Vc choice for HEA vs STR Dream11 Team.

AB de Villiers:
One of the world-class batsmen is going to make his debut in the Big Bash League this season. We all know the havoc that ABD can cause if he gets going and the wide range of shots he can play. He will be playing his first match in the BBL against the Strikers.

Mujeeb Ur Rahman:
This 18-year-old right-arm off-spinner from Afghanistan has played several T20 leagues across the world. He is yet to play his first match this season. Mujeeb bowled well in the last season and picked up 12 wickets in 12 games.

Matt Renshaw:
He is a very talented batsman and can also bowl 1-2 overs if required. He scored only 1 run in the last match and has scored a total of 166 runs in this season.

Max Bryant:
He is an outstanding batsman and opens the innings for Heat and scored 5 runs in the last match and has scored a total of 134 runs this season.

Ben Cutting:
He is an all-rounder who can hit some big shots down the order and bowl at a perfect pace too. Cutting scored 20 runs and went wicketless in the last match and has scored 138 runs and picked up 5 wickets this season.

Josh Lalor:
He is a left-arm medium-pace bowler and can pick up some early wickets. Lalor picked up 1 wicket in the last match and a total of 9 wickets this season.

Ben Laughlin:
This pacer a bowls pretty well and can take some wickets in the death overs with his variations. He picked up one wicket in the last match for his team.

Jake Weatherald:
This left-handed batsman has started this season well and played a sensible knock whenever required for his team. In the last match, he scored 27 runs and has scored a total of 293 runs this season.

Travis Head:
Skipper is a left-hand batsman and can bowl a few overs of spin too. He has played only one match so far in this season and scored 22 runs and picked up 2 wickets.

Rashid Khan:
He is one of the best leg-spinner in the world in the T20 format. Rashid Khan can also hit some big shots batting down the order. In the last match, he scored 2* runs and picked up 2 wickets. He has already picked up 14 wickets and scored a total of 87 runs this season.

Jonathan Wells:
He is a very consistent batsman and had a perfect last season. Wells has continued his form in this season too and scored 58 runs in the previous match and has scored a total of 292 runs in this season.

Michael Neser:
He is a bowling all-rounder who can score some handy runs down the order. M Neser picked up 1 wicket in the last match and picked up a total of 3 wickets this season.

Peter Siddle:
This veteran pacer bowls at a perfect pace and can pick up wickets at a crucial time. Siddle picked up 3 wickets in the last match and has picked up a total of 10 wickets this season.

Wes Agar:
He is a right-arm fast bowler and bowls at a good pace. Wes Agar has bowled decently so far in this season and has picked up 5 wickets this season. In the last match, he went wicketless.

Harry Conway:
He is a right-arm fast bowler and has played only 3 matches this season. Conway picked up 1 wicket in the last game and has picked up a total of 5 wickets this season.

If you liked Brisbane Heat vs Adelaide Strikers Dream11 Prediction, then follow us on Twitter for Dream11 Team and Fantasy Cricket Tips. You can also find us on Facebook.