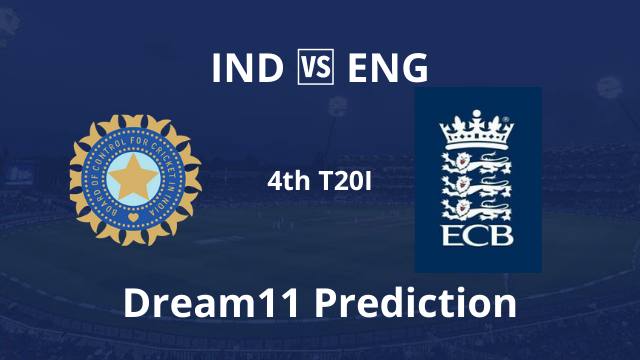 IND vs ENG Dream11 Prediction, Probable Playing XI, and Fantasy Cricket Tips. India and England will play against each other in the 4th T20I at Narendra Modi Stadium, Ahmedabad.

After making a perfect comeback in the series by winning the 2nd T20I, India had to face disappointment in the 3rd T20I as they lost the match by eight wickets.

After being rested for the 1st two T20Is, Rohit Sharma played his first match of the series and struggled slightly to score runs. KL Rahul has been having a very tough time and was out for a duck in the last two matches. After scoring a brilliant fifty in the 2nd match, Ishan Kishan batted at No.3 in the previous game.

King Kohli is back to form in style and has scored back-to-back fifties in two T20Is. He has scored two consecutive fifties in T20Is after 2016. Rishabh Pant has been coming up to score runs quickly in the middle-overs and put pressure on the opposition. Shreyas has been batting decently but has been struggling against the pacers.

Hardik Pandya and Sundar have been performing decently with the ball but need to deliver with the bat also. Sundar has consistently picked up wickets, but Hardik has not been effective with the ball. Yuzvendra Chahal has again been leaking a lot of runs and also not picked up many wickets.

Bhuvneshwar has been bowling well and trying to control the flow of runs, but Shardul Thakur, after an excellent performance in the 2nd match, went for many runs in the last game.

It’s a do-or-die situation for India because if they lose the next match, they will also lose the series.

England has shown why they are the best T20 team in the world as they did not let them affect the performance of one match and performed brilliantly in the last game and won comfortably by eight wickets.

Jason Roy has batted decently so far in this series and missed his fifty twice. The wicketkeeper-batsman and one of the best players of T20, Jos Buttler, is back to form by being unbeaten in the last match after two not scoring much in the first two matches. Dawid Malan at No.3has been batting decently but has not made much impact in this series.

Jonny Bairstow has been scoring runs at a decent rate and hit the winning runs in the last match. Ben Stokes and Eoin Morgan did not get to bat once again and have batted only once in this series. Sam Curran has been performing the role of all-rounder very well. He hasn’t got the chance with the bat but has been bowling decently so far.

Mark Wood was rested in the second match but bowled brilliantly in the last game and crashed through the Indian opening, and Jordan has also been consistently picking up wickets. Archer has been bowling well and controlling the flow of runs but has not been able to pick up wickets.

England would want to continue this momentum and try to seal the series by winning the next match.

The pitch here is a balanced one between bat and ball. There is pace and bounce for the fast bowlers in the first innings. The batsmen need to show patience, or else it will very tough to score runs. Eventually, it will get easier for batting. That is the reason the teams would like to chase if they win the toss.

King Kohli has shown everyone that form is temporary and class is permanent. He scored 77* runs from 46 balls in the last match. Virat Kohli is a very good Captaincy choice in IND vs ENG Dream11 Team of the 4th T20I.

Rohit Sharma opens the innings for the Indian team and is one of the finest white-ball cricket players. He scored only 15 runs in the last match.

He is the best T20I batsman for India. Rahul has been struggling a lot this series and was out for a duck in the last match

Ishan Kishan is a young left-handed batsman and was made to bat at No.3 and scored only four runs in the last match.

Hardik is an all-rounder and is equally good with both bat and ball. He scored 17 runs in the last match and is yet to pick up a wicket in this series.

He is the wicket-keeper batsman and is known for playing aggressively. Pant scored 25 runs from 20 balls in the last match.

He is a right-arm leg-break bowler and is consistent at picking up wickets. Chahal was expensive but managed to pick up a wicket in the last match.

Shardul Thakur is a right-arm medium-fast bowler and can also be handy with the bat down the order. He was expensive and went wicketless in the last match.

He is a right-arm medium-fast and is known to swing the ball and control the flow of runs in death overs by bowling yorkers. Bhuvneshwar bowled well but went wicketless in the last match.

Iyer generally bats in the middle-order and is a decent striker of the ball. He scored only nine runs in the last match.

Buttler is the wicket-keeper batsman of the team and is back in form with the last match. He smashed 83* runs from 52 balls in the previous game. Buttler is also a very good Captain choice in India vs England Dream11 Fantasy Team.

Malan is the No.1 T20I batsman and provides stability to the team. He has been batting decently and scored 18 runs in the last match.

Roy opens the innings for the team and has been in decent form so far this season. He scored only 9 runs in the last match.

Bairstow is a decent striker of the ball and generally bats in the middle-order. He batted well, scoring 40* runs in the last match.

Wood is a genuine fast bowler and bowls over 150kmph early in the innings. He picked up three wickets in the last match.

He is an all-rounder and is equally good with both bat and ball. Stokes went wicketless and also did not get a chance to bat in the last match.

He is a right-arm fast bowler and bowls consistently over 140kmph. Jofra has been wicketless from the last two matches.

He is a right-arm fast bowler and can also score some runs. Jordan bowled well in the last match, picking up a wicket and even bowled a maiden over.

He is a right-arm leg-break bowler and is the experienced spinner in the squad. Rashid bowled well but went wicketless in the last match.

Skipper Morgan is a left-handed batsman and can cause havoc in the death overs. Morgan has got a chance to bat only once so far in this series.

Curran is a left-arm medium-pace bowler and can play some big shots down the order. He went wicketless in the last match.