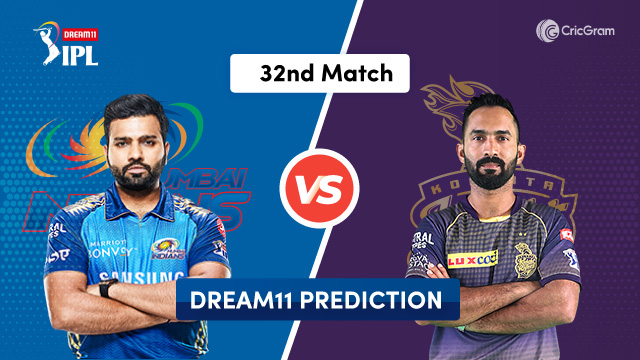 Mumbai Indians are having a great time as they are currently at the 2nd position on the points table with 5 wins and 2 losses and a total of 10 points.

They have appeared to be one of the strongest teams in IPL so far after DC as they have performed well in all the departments. In every match, a different player has stepped up and won the game for MI.

Rohit Sharma and Quinton de Kock have appeared to be in right touch and have been giving a decent start to the team. At No.3 Suryakumar Yadav has been playing his role pretty well by playing according to the situation.

Ishan Kishan, Hardik Pandya, and Kieron Pollard have been playing big shots and giving the finish that Indians require and to add that Krunal Pandya is also looking in good form with the bat in this season.

Their three pace bowlers Trent Boult, Jasprit Bumrah, and James Pattinson are in a perfect form and picking up wickets consistently. The spin duo Krunal Pandya and Rahul Chahar have also bowled economically and picked up wickets in crucial situations. Kieron Pollard has also bowled a few overs when required.

Mumbai Indians need not make any changes and perform the way they have been doing so far, and they will easily qualify for playoffs.

Kolkata Knight Riders have performed decently as they are currently at the 4th position on the points table with 4 wins and 3 losses and a total of 8 points.

The main problem for Knight Riders has been that they have been shuffling their batting order a lot. They won two consecutive matches by having a proper batting order, but in the last game, they changed it again and lost it by a significant margin.

Rahul Tripathi and Shubman Gill have looked in right touch playing in the top-order, and they must continue to do so for winning the matches. Middle-order looks strong with Nitish Rana, Skipper Eoin Morgan, Andre Russell, and also Dinesh Karthik getting back to form.

In the lower middle-order, Pat Cummins can also play some big shots and score some quick runs. The bowlers have been performing decently, but the main drawback has been that Cummins hasn’t been able to pick wickets but has managed to control the flow of runs.

Another major problem will be the warning for Narine over his bowling action, which means the team management may not play him in all the matches. The young bowlers Prasidh Krishna and Nagarkoti have been performing well along with the spinner Varun Chakravarthy.

Knight Riders must try Lockie Ferguson in place of Tom Banton as they already have a lot of batsmen.

Average 1st Innings Score: 169 (From 10 games played at this venue so far in this season)

Average 2nd Innings Score: 153 (From 10 matches played at this venue so far in this season)

Six out of the Ten matches have been won by the team batting first so far this season.

Skipper Rohit Sharma is a destructive batsman and generally opens the inning for MI. He scored only 5 runs in the last match. Rohit is very good Captain choice in MI vs KOL Dream11 Team.

He is the wicket-keeper batsman for the team and generally opens along with Rohit. Quinton scored 53 runs from just 36 balls in the last match.

He generally bats at NO.3 in the team. Surya batted brilliantly, scoring 53 runs from 32 balls in the last match.

Boult is very dangerous and one of the top bowlers across the world. He is a left-arm bowler who can swing the ball early in the inning and controls the flow of runs in death overs. Boult bowled well, picking up 1 wicket in the last match.

He is one of the best bowlers in the world. Bumrah went wicketless in the previous match. He is very good to pick in MI vs KKR Dream11 Team.

He is a match-winning allrounder and has performed for the team with both bat and ball. Pollard scored 11* runs in the last match.

He is a right-arm fast bowler and has made his debut this season. Pattinson was very expensive in the last match.

He is a bowling allrounder and has troubled many batsmen with his left-arm orthodox style. Krunal scored 12* runs and also picked up 2 wickets in the last match.

He is one of the top allrounders in India. Hardik Pandya was out for a duck in the last match.

He is a right-arm leg-break bowler and has been consistently picking up wickets this season. Chahar went wicketless in the last match.

He is a left-handed batsman and bats in the middle order. Ishan scored 28 runs in the last match.

He is a young right-handed batsman and has the talent of playing big innings. S Gill opens the innings and batted decently, scoring 34 runs in the last match.

He is an allrounder and is equally good with both bat and ball. In the last match, he scored 16 runs and was very expensive with the ball, and managed to pick up a wicket.

He is a left-handed batsman and provides stability in the middle order. In the last match, Morgan scored just 8 runs.

He is a right-arm off-spin bowler and is good at controlling the flow of runs and consistently picks up wickets. Narine did not play the last match.

He is a right-handed batsman and generally opens the inning. Tripathi scored only 16 runs in the last match batting at NO.7 position.

He is a bowling allrounder and can be handy with the bat down the order. Cummins scored 1 run in the last match and also went wicketless.

He is a left-handed batsman and generally bats at NO.3. Rana scored only 9 runs in the last match.

He is a young right-arm fast bowler and bowls at a perfect pace. Prasidh Krishna was expensive in the last match but managed to pick up 1 wicket.

Dinesh Karthik is a right-handed batsman and generally bats in the middle order. He scored only 1 run in the last match and has looked out of form this season.

If Tom Banton plays then pick him in place of Rahul Tripathi.