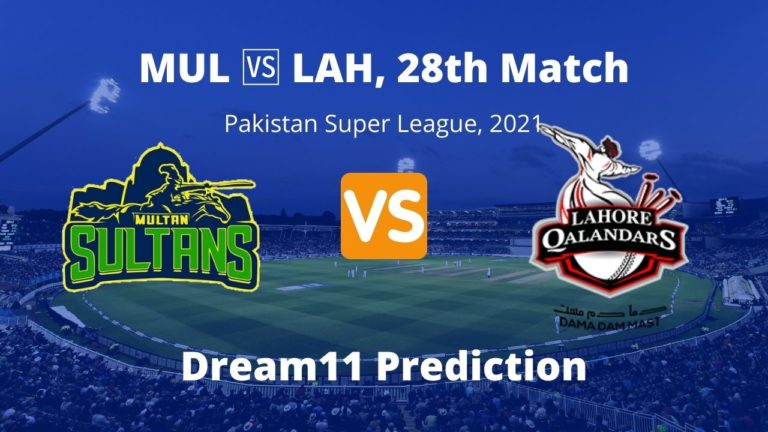 Multan Sultans and Lahore Qalandars will play in the 28th match of the Pakistan Super League 2021 at Sheikh Zayed Stadium, Abu Dhabi.

Sultans are in a dilemma as they have won four out of eight matches and are currently at the 4th position on the points table. They performed exceptionally well and won the game comfortably by a massive margin of 110 runs.

Skipper Rizwan has batted consistently so far and provided a good start in most of the matches. His partner, Shan Masood, batted brilliantly, scoring a fifty. At No.3, Maqsood is also in good form but got out early in the last match.

Johnson Charles played his first match in the middle-order and batted aggressively but missed his fifty by just three runs. Rossouw has not been in his best form this season, but Khushdil had supported his bat when he got the chance.

The bowling department has an equal contribution in the winnings of the matches so far. Shahnawaz picks up wickets consistently, and Imran Tahir bowled brilliantly and picked up three wickets in the last game. Imran Khan picked up two wickets. Muzarabani and Tahir managed to pick up one wicket each.

Multan Sultans need to win one more match, and they can ensure a spot in the playoffs.

Qalandars have now lost three consecutive matches but still are in a decent position as they have won five out of the nine games and are currently at the 3rd position on the points table. They lost a close contest in the last match by seven runs.

Fakhar Zaman and Sohail Akthar have struggled with the bat and have failed to provide a good start. Mohammad Hafeez was promoted at No.3, and after so many bad performances, he batted decently in the last match.

Agha Salman batted in the middle order but got out early, and Ben Dunk is still going through a rough patch. Tim David is brilliant and provides a good finish in almost every match, and Faulkner also scored quick runs in the last game.

The bowling department has been one of the best so far in this season. Shaheen Afridi and James Faulkner have been the crucial wicket-takers. Rashid Khan has also been economical and picked up some crucial wickets. Hafeez and Dhaniyal managed to pick up a wicket each.

If Lahore Qalandars lose the match against Multan, then there is a possibility that they might get eliminated from the race for playoffs.

We saw a high-scoring game recently as it was a day match. But in the matches happening at night time, the batsmen have struggled to score runs quickly. As this is a night match, we can expect scores around 165-175.

(The team batting first has won eight of the thirteen games played at this venue so far in this season.)

Skipper Rizwan has been leading the team from the front and scored 21 runs in the last match. He is a good choice for C and VC in your MUL vs LAH Dream11 team.

Shan opens the innings along with Rizwan. He batted brilliantly, scoring 73 runs in the last match.

He bats aggressively but got out, scoring only five runs in the last match.

He has been the leading wicket-taker for Multan this season. Dhani picked up one wicket in the last match.

He is an experienced right-arm leg-break bowler and picks up wickets consistently. Tahir bowled brilliantly, picking up three wickets for just seven runs in the last match.

He is a Right-hand batsman. J Charles score 47 runs in last game.

Imran is a right-arm medium-fast bowler and bowled well, picking up two wickets in the last match.

He is an experienced left-arm fast bowler and managed to pick up his first season’s first wicket in the last match.

Hafeez batted decently after 3-4 matches, scored 36 runs, and picked up a wicket. M Hafeez is also good for C and Vc in MUL vs LAH Dream11 Team for today match.

He has not been in form from the past few matches and scored only 19 runs from 26 balls in the last game.

Rashid Khan is a brilliant leg-spinner and can also be handy with the bat. He scored 11* runs and picked up two wickets in the last match. He is a good pick for C and VC in your MUL vs LAH Dream 11 team.

Shaheen is a young left-arm fast bowler and was expensive in the last match but managed to pick up a wicket.

He has been picking up wickets for fun this season. However, he went wicketless for the first time this season but scored 33 runs from just 18 balls.

Akhtar is in lousy form this season and scored 21 runs in the last match.

He bowls over 140 Kmph consistently. Unfortunately, Rauf was expensive in the last match and has been wicketless from the previous two games.

Ben Dunk has struggled to score from the last few matches and scored only six runs in the previous game.

David is perfect for the role of finisher. He batted brilliantly, scoring 34 runs from just 14 balls in the last match.