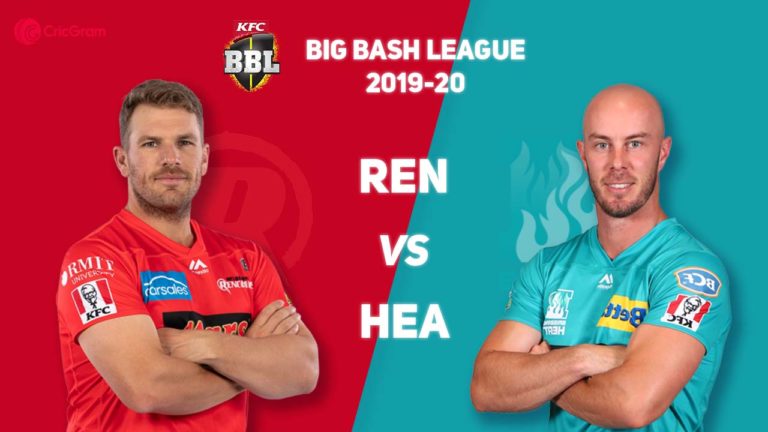 Melbourne Renegades will take on Brisbane Heat in the 56th match of Big Bash League 2019-20 at Docklands Stadium in Melbourne. We will provide REN vs HEA Dream11 Prediction, Match Preview, and Fantasy Cricket Tips.

In the head-to-head encounter between these two teams in this season, Melbourne Renegades won the match by 44 runs.

The defending champions performed poorly this season and stood at the last position on the points table with two wins and 11 losses and a total of 4 points.

In the last match, batting first, Renegades lost the wicket of Tom Cooper for 24 runs in the 4th over. They scored 54 runs in the power play for the loss of 1 wicket. Nabi’s 20 runs and Nathan McSweeny’s 11 runs didn’t help the Renegades much, but it was Aaron Finch alone who scored 109 runs from 68 balls and helped them post a total of 175 runs in 20 overs for the loss of 5 wickets.

With 175 runs to defend, Renegade bowlers managed to pick up 1 wicket in the power play for 53 runs, but after that, they gave away too many runs and also couldn’t pick wickets in regular intervals, and they just picked up 2 more wickets. Opposition chased down the target in 18.4 overs, and Renegades faced a defeat by 7 wickets. Mohammed Nabi and Will Sutherland picked up 1 wicket each.

Renegades were out of the tournament a long time ago, and they have got nothing to lose here and play fearless cricket in this match against Brisbane Heat and end this season on a winning note.

The Heat had a tough time this season as they are currently at the 7th position on the points table with six wins and 7 losses and a total of 12 points.

In the last match, batting first, Heat lost the wicket of Heazlett in the 2nd over who scored 18 runs from 7 balls. Ben Cutting 22 runs, and Chris Lynn 34 runs batted quite well and helped Heat to get into a good position. But it was AB de Villiers who batted aggressively by scoring 71 runs from 37 balls, and in the end, Labuschagne’s 24 runs from 13 balls helped Heat post a total of 186 runs in 20 overs for the loss of 5 wickets.

With 186 runs to defend, Heat bowled brilliantly from the start of the innings as they picked up 2 wickets in the power play for 46 runs. After the power play, the bowled even better and picked up wickets at regular intervals and got the opposition all out for just 115 runs and won the match by 71 runs. Mitchell Swepson bowled brilliantly and picked up 3 wickets for 31 runs in his 4 overs. James Pattinson and Mujeeb Ur Rahman also bowled quite well and picked up 2 wickets each. Jack Prestwidge and Ben Laughlin managed to pick up 1 wicket each.

Brisbane Heat needs to win this match against Renegades to qualify for the playoffs.

Average 1st innings score: 167 (In the 4 matches at this venue so far this season)

Average 2nd innings score: 162 (In the 4 games at this venue so far this season)

The pitch is expected to neutral.

Renegades have lost all the matches that have been played here in this season.

Aaron Finch:
Skipper Finch had to miss few matches this season due to national commitments. He opens the batting for Renegades and is a very destructive batsman and has played 8 games and scored 300 runs so far in this season. Finch batted brilliantly and scored 109 runs from 68 balls in the last match.

Mohammed Nabi:
He is one of the top all-rounders in the world and has played several leagues across the globe. Nabi has played 5 matches so far this season and picked up 4 wickets and scored 122 runs so far. In the last game, he picked up 1 wicket and scored 20 runs.

Kane Richardson:
He is a right-arm fast bowler and leads the pace attack for Renegades. Kane has played only 8 matches this season due to national commitments and has picked up 9 wickets so far in this season. He went wicketless in the last match.

Daniel Christian:
He is an excellent all-rounder in the T20 format and has played several leagues across the world. Christian hasn’t looked great this season. In the last match, he scored 0* runs and went wicketless and has scored 120 runs and has picked up 5 wickets so far in this season.

Beau Webster:
He is a batting all-rounder and bats in the middle order for Renegades and can also bowl a few overs of spin if required. Webster scored 7 runs in the last match and has scored a total of 344 runs so far in the 11 innings he played.

Samit Patel:
He is an all-rounder and is equally good with the bat and ball. Samit did not get to bat in the last game and also went wicketless. He has picked up 5 wickets so far in this season.

Cameron Boyce:
Boyce is a bowling all-rounder who can hit some big sixes batting down the order. He picked up 14 wickets and scored 146 runs, which include a fifty in the last season. He went wicketless in the previous match and has picked up a total of 13 wickets so far this season.

Chris Lynn:
Skipper Lynn is a destructive batsman and is known for his big shots and massive strike. He scored 34 runs in the last match and has scored a total of 373 runs so far in this season. Lynn is an excellent Captain or Vc choice for REN vs HEA Dream11 Team.

AB de Villiers:
One of the world-class batsmen made his debut in the Big Bash League this season. ABD scored 71 runs from 37 balls in the last match and has scored a total of 141 runs so far in the 4 games he played.

Ben Cutting:
He is an all-rounder who can hit some big shots down the order and bowl at a perfect pace too. Cutting went wicketless in the last match but scored 22 runs and has scored 165 runs and picked up 9 wickets so far in this season.

Matt Renshaw:
He is a very talented batsman and can also bowl 1-2 overs if required. Renshaw scored 10 runs in the last match and has scored a total of 283 runs so far in this season.

Marnus Labuschagne:
He is a right-handed batsman and hasn’t played much of Big Bash as he has played only 7 innings and scored 42 runs. Marnus played 2 matches this season and scored 27 runs so far. In the last game, he scored 24* runs from 13 balls.

Sam Heazlett:
He is an opening batsman for Heat and has played 7 matches in this season and scored 127 runs so far. In the last match, he batted well and scored 18 runs.

Mujeeb Ur Rahman:
This 18-year-old right-arm off-spinner from Afghanistan has played several T20 leagues across the world. He has played 4 matches so far in this season and picked up 2 wickets. In the last match, he bowled brilliantly by picking up 2 wickets for 11 runs in his 4 overs.

Josh Lalor:
He is a left-arm medium-pace bowler and can pick up some early wickets and has picked up a total of 11 wickets so far in this season. He did not play the last match.

If you liked Melbourne Renegades vs Brisbane Heat Dream11 Prediction, then follow us on Twitter for Dream11 Team and Fantasy Cricket Tips. You can also find us on Facebook.