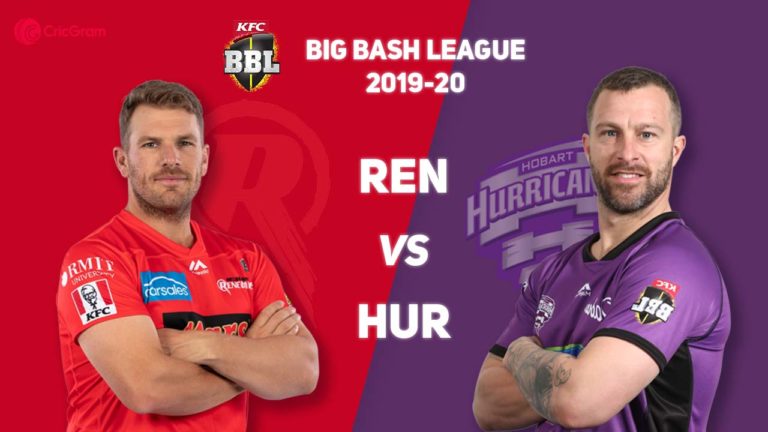 Melbourne Renegades will take on Hobart Hurricanes in the 47th match of Big Bash League 2019-20 at Docklands Stadium in Melbourne. We will provide REN vs HUR Dream11 Prediction, Match Preview, and Fantasy Cricket Tips.

In the head-to-head encounter between these two teams in this season, Hobart Hurricanes won the match by 7 wickets.

The defending champions are having a tough time this season but will be slightly relieved as they have won 2 back to back matches. They are currently at the last position on the points table with 2 wins and 9 losses and a total of 4 points.

In the last match, batting first Renegades lost the wicket of Marcus Harris for 6 runs in the 4th over. After that Shaun Marsh 27 runs and Sam Harper, 21 runs played well in the power play and scored 39 runs.  After they got out, Beau Webster 36 runs and Will Sutherland 20 runs played sensibly in the middle overs. In the end, Mohammad Nabi 22 runs and Samit Patel 23 runs played a very good cameo and helped Renegades post a total of 164 runs in 20 overs.

With 164 runs to defend, Renegade bowlers were smashed all over the park in the power play and the opposition scored 84 runs and lost one wicket at the end of the power play. It looked like Renegades had lost the match and it was tough for them to win the match from that position but after that, they bowled brilliantly and took 9 wickets for just 36 runs and got the opposition all out for 120 runs in 15 overs and won the match by 44 runs. Cameron Boyce bowled brilliantly and picked up 4 wickets for just 15 runs in his 4 overs and was awarded Man of the Match. Daniel Christian and Samit Patel picked up 2 wickets each, Andrew Fekete picked up 1 wicket.

They would win this match against the Hurricanes and keep up their winning momentum going and have some wins under their name.

Hurricanes are having a tough time this season as they are currently at the 7th points table with 3 wins and 7 losses and a total of 7 points.

In the last match, bowling first, Hurricanes picked up 2 wickets for 45 runs in the power play but after that, they weren’t able to pick up wickets until the 13th over and also gave away many runs. They picked up another wicket in the very next over but once again went for runs after that and managed to pick up a wicket in the very last over. Hurricanes gave away 186 runs in 20 overs. Scott Boland bowled well and picked up 2 wickets. Clive Rose and Nathan Ellis picked up 1 wicket each.

With 187 runs to chase, Hurricanes lost the wicket of Mathew Wade in the 1st overs for 5 runs and they lost another wicket of Caleb Jewell in the 5th over who got out after scoring 10 runs. Late Jake Doran 28 runs and Ben McDermott 31 runs tried to help the Hurricanes in chasing. But the real star of the match was David Miller who scored 90* runs from 48 balls but still couldn’t win the match for Hurricanes and they managed to score a total of 176 runs in 20 overs and lost the match by 10 runs.

They would want to win this match against Renegades and try to win as many matches as possible to qualify for the playoffs.

Average first innings score: 158 (In the 3 games at this venue so far this season)

Average second innings score:153 (In the 3 games at this venue so far this season)

The pitch is expected to neutral and an average 1st innings score of 158 runs are expected.

Shaun Marsh:
He is one of the most successful batsmen in the history of the Big Bash League. Marsh has an overall average of above 45 and continued his form in this season too, and scored a total of 383 runs so far. In the last match, he scored 27 runs.

Mohammed Nabi:
He is one of the top all-rounders in the world and has played several leagues across the globe. Nabi has played 3 matches so far this season and picked up two wickets and scored 39 runs so far. In the last match, he went wicketless and scored 22* runs.

Daniel Christian:
He is an excellent all-rounder in the T20 format and has played several leagues across the world. He hasn’t looked great this season. In the last match, he scored 1 run and picked up 2 wickets. He has scored 117 runs and has picked up 5 wickets so far in this season.

Beau Webster:
He is a batting all-rounder and bats in the middle order for Renegades and can also bowl a few overs of spin if required. Webster scored 36 runs in the last match and has scored a total of 287 runs so far in the 9 innings he played.

Samit Patel:
He is an all-rounder and is equally good with the bat and ball. Samit scored 23* runs from 10 balls in the last game and picked up 2 wickets. He has picked up 5 wickets so far in this season.

Marcus Harris:
He is a left-handed Australian batsman. Harris has played 8 matches so far this season and has scored a total of 107 runs so far. In the last game, he scored 6 runs.

Cameron Boyce:
Boyce is a bowling all-rounder who can hit some big sixes batting down the order. He picked up 14 wickets and scored 146 runs, which include a fifty in the last season. He picked up 4 wickets in the previous match and has picked up a total of 11 wickets so far this season.

Mathew Wade:
He is a left-handed wicket-keeper batsman and had a perfect last season. Wade scored 592 runs in 15 innings in the previous season. This season he has scored 85 runs so far and scored 5 runs in the last game.

Ben McDermott:
He is wicket-keeper batsman for Hobart Hurricanes this season. Ben scored 31 runs in the last match and has scored a total of 198 runs so far in this season.

David Miller:
He is a very talented left-hand batsman and generally plays in the middle order. Miller is in poor form recently but he played a destructive inning in the last match by scoring 90* runs from 48 balls and has scored a total of 181 runs so far in this season.

Scott Boland:
He is a right-arm medium-fast bowler and has played 6 matches this season. Boland managed to pick up 2 wickets in the last game and has picked up a total of 10 wickets so far in this season.

Caleb Jewell:
He is the opener for Hurricanes and scored 10 runs in the last match. Caleb Jewell has scored a total of 181 runs so far in this season.

George Bailey:
This veteran batsman is one of the successful batsmen in the Big Bash league and scores runs consistently and can hit some big shots too. Bailey has scored 131 runs so far in the 7 innings he played in this season and scored 5 runs in the last match.

Qais Ahmed:
He is a very talented leg-spinner from Afghanistan. Qais went wicketless in the last match but has bowled well in the other games and has picked up a total of 11 wickets so far in this season.

Nathan Ellis:
He is a bowling all-rounder and can score some handy runs down the order. Ellis has performed decently so far in the tournament. In the last match, he picked up 1 wicket and has picked up a total of 7 wickets this season.