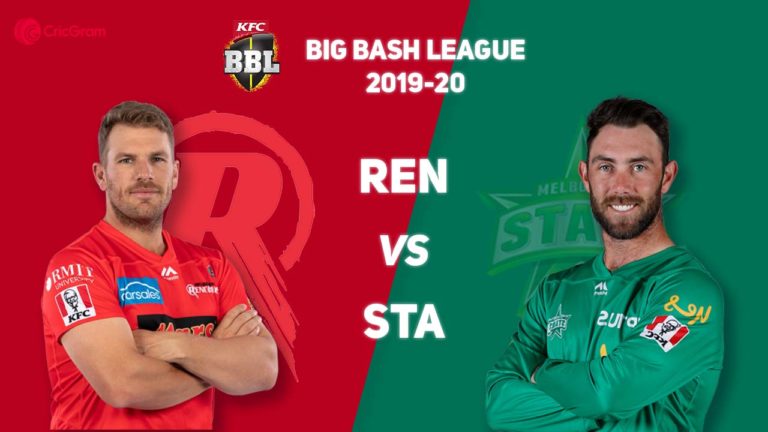 Melbourne Renegades will take on Melbourne Stars in the 30th match of Big Bash League 2019-20 at Docklands Stadium in Melbourne. We will provide REN vs STA Dream11 Prediction, Match Preview, and Fantasy Cricket Tips.

In the head-to-head encounter between these two teams in this season, Melbourne Stars won the match by 8 wickets.

The defending champions are having a tough time this season, and it looks like the chances of qualifying for playoffs are almost over for the Renegades. They have played 7 matches and have lost all the 7 games and are currently at the bottom of the points table.

In the last match, batting first, Renegades lost the wicket of Aaron Finch for a duck in the 1st over. They lost another wicket of Marcus Harris in the 3rd over who got out after scoring 14 runs. After that, they played well for a few over and lost the wicket of Shaun Marsh for 2 runs in the 7th over. Later Sam Harper and Beau Webster batted well by scoring 73 and 59* runs respectively and added a partnership of 71 runs for the 4th wicket. In the end, Daniel Christian scored 19 runs from 10 balls and helped Renegades post a total of 175 runs.

With 175 runs to defend, bowlers were not at all in rhythm in that match. They gave away series in the beginning and were not able to pick up wickets until the 11th over. They gave away 102 runs for the first wicket, and it looked like the match was almost over for the Renegades. Though they managed to pick up wickets after that, the damage was already done by the opposition, and it was easy for the opposition from there. Renegades lost the match by 6 wickets. Richardson bowled well and picked up 3 wickets, Kane Richardson picked up 1 wicket. No other bowlers were able to pick up wickets.

They would be hoping to win this match Melbourne Stars and compete back into the race for playoff though it seems difficult from the position they currently are in this season.

Stars are having a great time this season as they are currently at the top of the points table with 6 wins and 1 loss and a total of 12 points.

In the last match, bowling first, it took 8 overs for the Stars to pick up the 1st wicket, but after that, they picked up another wicket in the 9th over, and after that, they weren’t able to pick up wickets until the last over but they also did not give away many runs. In the previous over, Haris Rauf bowled brilliantly and picked up a hat trick. They restricted the opposition to 145 runs in 20 overs. Haris Rauf picked up 3 wickets, Adam Zampa and Nathan Coulter-Nile picked up 1 wicket each.

With 146 runs to chase and the kind of batting line up that Stars have, it looked like an easy chase.  They lost the wickets of Nic Maddinson and Coulter-Nile in the power play and managed to score 53 runs. They lost the wicket of Nic Larkin in the 8th over, but Marcus Stoinis and Glenn Maxwell batted brilliantly by scoring 50 and 59*runs respectively and led the Stars to victory by 6 wickets.

Stars would be high on confidence being on the top of the table and would want to win against the Renegades and continue their winning momentum.

The pitch is neutral, and an average score of 155 runs is expected.

There are high chances of rain on the match day, and there might be a reduction in some overs per side.

Shaun Marsh:
He is one of the most successful batsmen in the history of the Big Bash League. Marsh has an overall average of 47.66 and continued his form in this season, too, and scored a total of 225 runs. In the last match, he scored 2 runs.

Daniel Christian:
He is an excellent all-rounder in the T20 format and has played several leagues across the world. He hasn’t looked great this season. In the last match, he scored 19 runs and went wicketless. He has scored 81 runs but hasn’t picked up wickets in this season.

Cameron Boyce:
Boyce is a bowling all-rounder who can hit some big sixes batting down the order. He picked up 14 wickets and scored 146 runs, which include a fifty in the last season. He went wicketless in the previous match and has picked up a total of 5 wickets this season.

Beau Webster:
He is a batting all-rounder and bats in the middle order for Renegades and can also bowl a few overs of spin if required. He played well in the last match and scored 59* runs and has scored a total of 169 runs in the 5 innings he played.

Marcus Harris:
He is a left-handed Australian batsman and also can bowl a few overs of spin. He has played 4 matches this season and has scored a total of 43 runs. In the last game, he scored 14 runs.

Samit Patel:
He is an all-rounder and is equally good with the bat and ball. Samit Patel has played only one match this season. He scored 2* runs in the last game and went wicketless.

Richard Gleeson:
He is a bowling all-rounder who can score some handy runs down the order. Gleeson has bowled well in the last match and picked up 3 wickets and has picked up a total of 6 wickets this season.

Glenn Maxwell:
He is a batting all-rounder, but he is mostly known for his destructive batting. Maxwell has a wide range of shorts and can smash the bowlers all over the park. In the last match, he scored 59* runs. He has scored a total of 228 runs and picked up 4 wickets this season. He is the best to pick in REN vs STA Dream11 Team.

Marcus Stoinis:
He is one of the top all-rounders in the Big Bash League. Stoinis is equally good with both bat and ball. He opens the batting for Melbourne Stars and scored 50 runs in the previous match and has scored a total of 331 runs in this season.

Nathan Coulter-Nile:
He is a bowling all-rounder and can hit some big shots down the order. He picked up 1 wicket and scored 11runs in the last match. Coulter-Nile has scored a total of 36 runs and picked up 4 wickets this season.

Haris Rauf:
He is a right-arm fast bowler from Pakistan and has looked very impressive this season. Haris Rauf was not able to play all the matches as only 2 foreign players are allowed. He picked up 3 wickets in the last game by picking up the hat-trick. He has picked up 13 wickets in just 4 games he has played.

Sandeep Lamichhane:
This young lad is a brilliant leg spinner and adapts to conditions very quickly. He went wicketless in the previous match. He has picked up a total of 6 wickets this season.

Ben Dunk:
Left-handed batsman will bat in the middle order for Melbourne Stars. He scored 62 runs in this season. He did not play the last match.

If you liked Melbourne Renegades vs Melbourne Stars Dream11 Prediction, then follow us on Twitter for Dream11 Team and Fantasy Cricket Tips. You can also find us on Facebook.