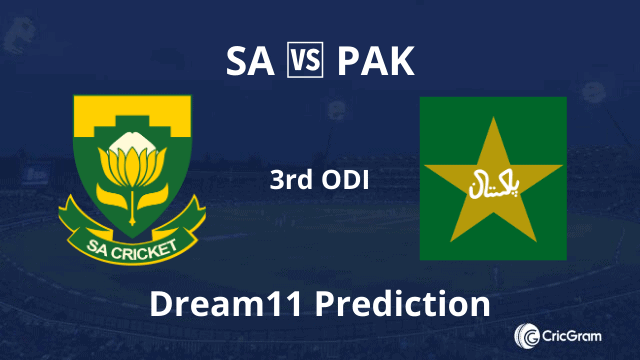 SA vs PAK Dream11 Prediction, Probable Playing XI, and Fantasy Cricket Tips of the 3rd ODI match. South Africa and Pakistan will be played in the 3rd ODI at SuperSport Park, Centurion.

South Africa has made a comeback into the series by winning the last match by 17 runs. They dominated the entire game, but towards the end, it looked like they were going to lose, but they picked up wickets and won the match.

Quinton de Kock batted well, scoring eighty runs and his partner Markram started well but couldn’t score big. At No.3, Skipper Bavuma, after a disappointing performance in the first match, batted brilliantly in the last game but missed his century by just eight runs.

Rassie van der Dussen continued his form and scored a brilliant fifty along with David Miller, who also scored a half-century. Heinrich Klassen has appeared to be struggling to score runs so far in this series.

Phehlukwayo and Rabada have been handy with the bat whenever they got a chance to bat.

The bowling unit has been performing well, but they have not maintained pressure for more extended periods. Anrich Nortje has been the consistent wicket-taker of the team and has troubled the batsmen with his bouncers. Phehlukwayo and Rabada have also been contributing to picking up wickets.

South Africa needs to improve their bowling performance slightly and try not to lose momentum towards the end of the match.

After a good performance in the first match, Pakistan had to face disappointment in the second match as they lost by 17 runs. They put up a perfect fight till the last over but couldn’t cross the finishing line.

Opening batsman Fakhar Zaman put up the highest individual score while chasing as he scored 193 runs, but he did not get enough support from the other batsman. Imam-Ul-Haq, after a good performance in the first match, got out early in the last game.

The in-form batsman skipper Babar Azam batted decently but couldn’t score big. Mohammad Rizwan batted well in the first match but got out for a duck in the second. The middle-order appeared to be somewhat weaker as Danish Khan and Asif Ali haven’t scored much in this series.

Shadab Khan and Faheem Ashraf have tried to score runs to their potential when they have gotten a chance. The Pakistan bowlers were completely out of rhythm in the last match as they conceded many runs. Only Haris Rauf has been picking up wickets consistently, and Shaheen Afridi has also contributed a bit. Mohammad Hasnain and Faheem Ashraf have also picked up wickets, but they have been a little expensive.

Pakistan has to improve their middle-order, or else they will face the same situation if they have to chase a giant total or put up a big score.

The pitch here is considered to be somewhat quicker than usual. The fast bowlers will have an added advantage, and also, the batsman can play good shots as the ball comes easily onto the bat. We can expect a neutral pitch.

The weather will be cloudy throughout the match, and there are high chances of rain.

Skipper Bavuma is a right-handed batsman and bats at No.3. Bavuma was unlucky in the last match as he missed his century by just eight runs.

Rassie is a right-handed batsman and generally bats in the middle-order. He once again batted brilliantly, scoring 60 runs from just 37 balls.

He is a right-handed batsman and opens the innings for the team. Malan has not played so far in this series.

He is a bowling all-rounder but is equally good with the bat. Phehlukwayo scored only three runs but managed to pick up two wickets and was slightly expensive.

He is a right-handed batsman and also can bowl a few overs of spin. Markram scored 39 runs in the last match but went wicketless.

Klassen is a right-handed batsman and a good striker of the ball. In the last match, he scored 11 runs.

He is one of the best batsmen currently in the cricket world. Babar scored 31 runs in the last match.

Fakhar is a left-handed batsman and generally opens the innings for the team. He played a heroic inning in the last match scoring 193 runs but couldn’t finish the game.

He is also a left-handed batsman and opens the innings along with Fakhar. Imam scored only five runs in the last match.

He is the wicketkeeper-batsman of the team and is an outstanding striker of the ball. Rizwan was out for a duck in the last match.

He is a right-arm fast bowler and bowls consistently over 140kmph. Rauf bowled very well, picking up 3 wickets in the last match.

He is a young left-arm fast bowler and troubles the batsman with his pace and bounce. Shaheen was expensive but managed to pick up 1 wicket.

Faheem is an all-rounder and is equally good with both bat and ball. In the last match, he scored 11 runs and was expensive with the ball but managed to pick up a wicket.

He is a right-arm fast bowler. Hasnain was expensive but managed to pick up a wicket in the last match.