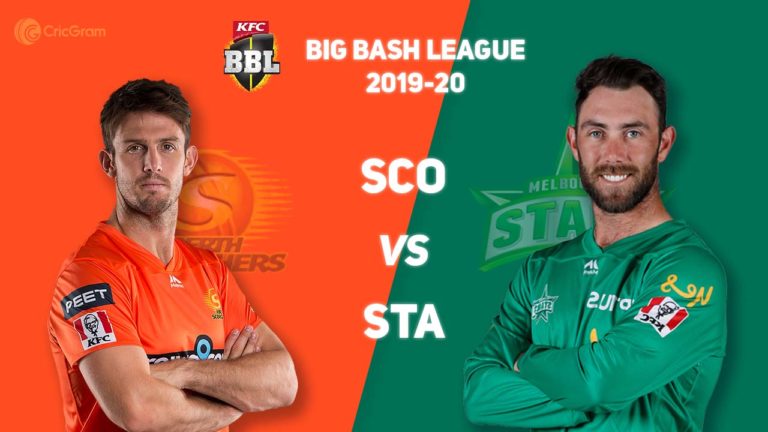 Perth Scorchers will take on Melbourne Stars in the 38th match of Big Bash League 2019-20 at Perth Stadium in Perth. We will provide SCO vs STA Dream11 Prediction, Match Preview, and Probable Playing XI of the game.

Perth Scorchers would be a little happy with the way they are performing as they are currently at 3rd position on the points table with 5 wins and 3 losses and a total of 10 points.

In the last match, batting first Scorchers lost the wicket of Liam Livingstone in the 2nd over who scored three runs. In the very next over, they lost the wicket of Sam Whiteman for 8 runs. After 3 overs, Scorchers were 16 runs for 2 wickets and looked in trouble. But Josh Inglis and Mitchell Marsh batted brilliantly by scoring 73 and 40 runs respectively, and added109 runs to the 3rd wicket. After that, they lost some quick wickets, but they managed to post a total of 175 runs in 20 overs.

With 175 runs to defend, Scorchers bowled exceptionally well. They picked up 2 wickets for 5 runs in the second over. They weren’t able to pick up another wicket until the 8th over, but after that, they bowled brilliantly and picked up wickets at regular intervals and got the opposition all out for just 98 runs in 17.1 overs and won the match by 77 runs. Jhye Richardson bowled brilliantly and picked up 4 wickets for only 19 runs in his 4 overs. Fawad Ahmed and Liam Livingstone picked up 2 wickets each, Chris Jordan and Mitchell Marsh picked up 1 wicket each.

Perth Scorchers have won 3 matches in a row and would want to win their next game against the Melbourne Stars and continue their winning streak.

Melbourne Stars are having the best time in the tournament as they are currently at the top of the points table with 8 wins and 1 loss and a total of 16 points.

In the last match, batting first, it was a one-person show for the Stars. Marcus Stoinis played a destructive inning of 147* from 79 balls, and he was supported well by Hilton Cartwright, who scored 59 runs from 40 balls. He got out in the last over, and Maxwell came to the crease and scored 5* runs. Stars posted a massive total of 219 runs in 20 overs.

With 219 runs to defend, bowlers did a decent job. They picked up a wicket in the 1st over and picked up another wicket within the power play and gave away 54 runs. They picked up wickets whenever the opposition tried to build a partnership and never allowed the opponent to score runs freely and restricted them to a total of 175 runs and won the match by 44 runs. Clint Hinchliffe bowled brilliantly and picked up 3 wickets for just 20 runs in his 4 overs. Daniel Worrall, Haris Rauf, and Sandeep Lamichane picked up one wicket each.

They have won 6 matches in a row and would want to maintain their winning streak and number 1 spot by winning the next game against Perth Scorchers.

It is the fifth match of this season in Perth Stadium, Perth. Pitch is generally considered to be good for batting in the beginning and tends to get slower in the second half of the match. Four matches played here so far and in every match batting, first-team score 170+ runs and won all 4 matches.

It is going to be a hot day, and there is no forecast of rain on the match day.

Scorchers have managed to win 2 out of the 4 matches here at this venue in this season.

Mitchell Marsh:
He is a perfect all-rounder and can be the match-winner with both bat and ball for his team. Marsh scored 40 runs from 29 balls and picked up 1 wicket in the last match and has scored a total of 347 runs in the 7 games he played this season.

Liam Livingstone:
He is an outstanding batsman, especially in the T20 format, and is a good striker of the ball and is generally known for scoring runs quickly and scored 3 runs and picked up 2 wickets in the last match. Liam has scored a total of 226 runs and picked up 4 wickets this season.

Cameron Bancroft:
He is a decent batsman and played some good innings for his team last season. He scored 14 runs in the previous match and has scored a total of 201 runs this season.

Chris Jordan:
He is an attacking bowler and is in great form recently. He picked up 1 wicket in the last match and has picked up 11 wickets in the season till now. Jordan can also play quick cameos with the bat.

Jhye Richardson:
He is a very talented fast bowler and bowls at an excellent pace and picks up wickets consistently. In the last match, he picked up 4 wickets and has picked up a total of 13 wickets this season.

Josh Inglis:
He is the opening batsman for Scorchers and has played decently in this season so far. He scored 73 runs in the last match and has scored a total of 275 runs this season.

Fawad Ahmed:
He is a right-arm leg spinner and bowled pretty well in the last match and picked up 2 wickets in the previous game. He has picked up a total of 11 wickets this season.

Glenn Maxwell:
He is a batting all-rounder, but he is mostly known for his destructive batting. Maxwell has a wide range of shorts and can smash the bowlers all over the park. In the last match, he scored 5* runs. He has scored a total of 316 runs and picked up 4 wickets this season.

Marcus Stoinis:
He is one of the top all-rounders in the Big Bash League. Stoinis is equally good with both bat and ball. He opens the batting for Melbourne Stars and played a destructive inning of 147* runs in 79 balls in the previous match and has scored a total of 473 runs in this season and is the current leading run-scorer in this season.

Sandeep Lamichhane:
This young lad is a brilliant leg spinner and adapts to conditions very quickly. He picked up 1 wicket in the previous match and has picked up a total of 9 wickets this season.

Haris Rauf:
He is a right-arm fast bowler from Pakistan and has looked very impressive this season. Rauf was not able to play all the matches as only 2 foreign players are allowed and picked up 1 wicket in the last game. He has picked up 15 wickets in the 6 games he has played.

Daniel Worrall:
He is a medium-fast bowler and bowls at a decent pace and picked up 1 wicket in the last match. D Worrall has picked up a total of 5 wickets this season.

Hilton Cartwright:
He is a batting all-rounder who can bowl a few overs of medium pace. Cartwright played a decent inning of 59 runs from 40 balls in the last match and has scored a total of 132 runs in 5 innings that the batted.

Clint Hinchliffe:
He is a bowling all-rounder and bowled exceptionally well in the last match. Clint picked up 3 wickets in the previous game and has picked up four wickets in the four innings that he bowled this season.

If you liked Perth Scorchers vs Melbourne Stars Dream11 Prediction, then follow us on Twitter for Dream11 Team and Fantasy Cricket Tips. You can also find us on Facebook.