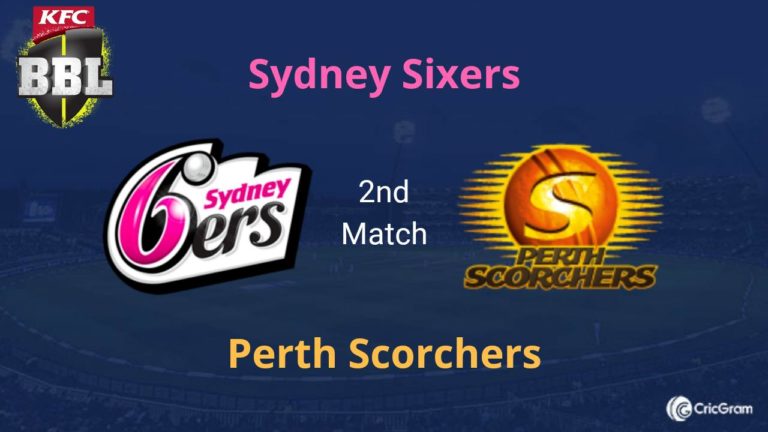 The second match of this season is between Sydney Sixers and Perth Scorchers. Last season Sydney Sixers performed well and were qualified to playoffs, but they couldn’t make it to finals. In history, Big Bash League the Sydney Sixers played very well in some seasons and were extremely poor in a couple of seasons.

Sydney Sixers were the first team to win the Big Bash Title. They have qualified for playoffs 5 out of 8 times and have been runner up’s twice and won the title once. Sydney Sixers, under the captaincy of the experienced all-rounder Moises Henriques and players like James Vince, Steve Smith, Tom Curran, Sean Abbott, Nathan Lyon, look pretty strong. It won’t be easy for any team to win against the Sydney Sixers.

Perth Scorchers is one of the most successful teams in the history of Big Bash league except for the last season. They were at the bottom of the points table in the previous season. But in the remaining all seasons, they have qualified for the playoffs and have been runner up’s twice and have won the title 3 times, which is most by any team. Young all-rounder Mitchell Marsh will be leading Perth Scorchers, and players like Liam Living Stone, Chris Jordan, Jhye Richardson, Ashton Turner will be key players for them this season.

The pitch generally is perfect for batting but also provides a right turn for the spinners. It doesn’t have much pace and bounce as the other pitches in Australia. There is no forecast of rain on the match day.

Daniel Hughes:
He was very consistent in the last season. He scored a total of 399 runs, which include 4 fifties.

Moises Henriques:
Skipper Henriques is an experienced all-rounder and has scored 289 runs, which include two 50’s for his team. Henriques is default Captain pick for SIX vs SCO Dream11 Team of 2nd Match, BBL 2019-20

James Vince:
He is a very talented batsman and can play big innings for his team. He scored a total of 268 runs in 7 innings in the last season.

Tom Curran:
He is a brilliant all-rounder and equally good with the bat as well as the ball. He picked 20 wickets and scored 185 runs in the last season.

Sean Abbott:
He is the attacking pace bowler for Sydney Sixers and has the wicket-taking capability in every match. He had picked up a total of 22 wickets last season and also had done some hitting when he got the chance to bat. S Abbott is good to pick in Sydney Sixers vs Perth Scorchers Dream11 Team.

Steve Okeefe: He is an outstanding bowler alongside Sean Abbott and bowls at a perfect pace. He picked up a total of 20 wickets with an average of 17.50 in the previous season.

Liam Livingstone:
He is an outstanding batsman, especially in the T20 format. He is a good striker of the ball and is generally known for scoring runs quickly across the world. It is his first edition of the Big Bash League.

Mitchell Marsh:
He is a perfect all-rounder and can be the match-winner with both bat and ball for his team. He scored 122 runs in 7 innings last season, which included a fifty.

Cameron Bancroft:
He is a decent batsman and played some good innings for his team last season he played and scored a total of 254 runs.

Ashton Turner:
He is known for his big sixes and the strike rate at which he plays. He scored a total of 380 runs in the last season for his team.

Chris Jordan:
He is an attacking bowler and is in great form recently. He has been picking up wickets consistently in the matches that he played for England in recent times.

Fawad Ahmed:
In the last season of Big Bash, Right-arm leg break bowler played for Sydney Thunder. He is a good bowler.

Jhye Richardson:
He is a very talented fast bowler and bowls at an excellent pace and picks up wickets consistently. He picked up a total of 7 wickets in the 5 matches that he played last season.

If you liked, SCO vs SIX Dream11 Prediction then follows us on Twitter for the Latest News and Playing XI. You can also find us on Facebook.