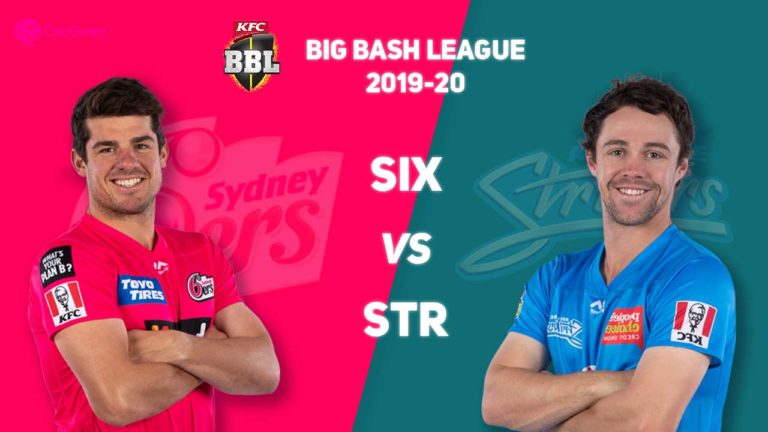 Sydney Sixers are currently at 2nd position with 4 wins and 2 losses and a total of 8 points to their name. In the last match, bowling first Sixers picked up an early wicket in the 2nd over but after that, they gave away runs. In the 7th and 8th over they picked up wickets and came back strongly into the game. They restricted the runs after that and bowled extremely well and picked up wickets in the death overs and restricted the opposition to a total of 153 runs. Jackson Bird and Lloyd Pope bowled well and picked up 2 wickets each. Dwarshuis and Tom Curran picked up one wicket each.

With 154 runs to chase, openers Josh Philippe and Daniel Hughes batted extremely well by scoring 33 and 40 runs respectively and added 70 runs to the first wicket. But after that, they lost 3 wickets for just 10 runs and looked in trouble. But James Vince’s 41 runs and Jordan Silk’s 36* runs ensured SIxers a victory by 6 wickets. They would be confident after 2 consecutive wins and try to win the match against Adelaide Strikers.

Strikers have played well this season. They lost the last match and are at the 3rd position on the points table with 3 wins and a loss and a total of 7 points. In the last match, bowling first Strikers picked up a wicket I the 4th over but after that, they gave away runs and weren’t able to pick up wickets until the 14th over. But they bowled decently in the death overs and picked up some wickets and restricted the opposition to a total of 168 runs. Peter Siddle picked up 2 wickets for 30 runs in his 4 overs. Rashid Khan and Billy Stanlake managed to pick up one wicket each.

With 169 runs to chase, they had to face the set back as Philip Salt got out for a duck in the second over. They also lost wickets of Mathew Short and Alex Carey for 6 runs and 19 runs respectively in the power play. Jake Weatherald and Jonathan Wells put up a fight and gave Strikers the hope by scoring 52 runs and 26 runs respectively. But after that they lost the wickets of set batsmen and other batsmen couldn’t make an impact and looked like the match was over for Strikers. However, Rashid Khan came and changed the course of the match by scoring 40 runs from just 18 balls. 5 runs were needed from 2 balls and Rashid Khan got out and it was then over for Strikers. They lost the match by 3 runs. They would be hoping to get back to their winning ways by winning the next match against Sydney Sixers.

Not many matches have been played here so there is no information about how the pitch will play. However, A neutral track can be expected with slight more advantage to batsmen.


There is no forecast of rain on the matchday but the main concern is the smoke due to bush fire crisis in New South Wales.

Daniel Hughes:
He is the opening batsman for Sydney Sixers alongside Josh Phillippe and is a very consistent batsman. He played a sensible knock of 40 runs in the last match and has scored a total of 144 runs this season.

Josh Phillippe:
He opens the innings for Sydney Sixers and is a destructive batsman. He played decent innings in the last match and scored 33 runs and a total of 173 runs in this season.

James Vince:
He is a very talented batsman and can play big innings for his team. In the last match, he scored 41 runs from 26 balls.

Tom Curran:
He is a brilliant all-rounder. Tom is equally good with the bat as well as the ball. He has picked up 9 wickets in this season and picked up one wicket in the last match.

Josh Hazlewood:
This right-arm fast bowler hasn’t played Big Bash since season 3. He has an excellent record in the Big Bash League and has picked up 21 wickets in the 14 matches he played and has an average of 11.86 with an economy rate of 5.

Ben Dwarshuis:
This left-arm medium-fast bowler has bowled extremely well and has picked up 7 wickets this season.

Jackson Bird:
He is also an attacking bowler and picked up 2 wickets in the last match and has picked up a total of 5 wickets this season.

Lloyd Pope:
This right-arm leg spinner has looked impressive this season and picked up 2 wickets in the last match and has picked up a total of 6 wickets this season.

Alex Carey:
Skipper and wicket-keeper Alex Carey is a reliable batsman in the middle order. He scored 19 runs in the last match and has scored a total of 205 runs this season.

Jake Weatherald:
This left-handed batsman has started this season well and played a sensible knock whenever required for his team. In the last match, he played well and scored 52 runs from 37 balls. He has scored a total of 204 runs this season.

Rashid Khan:
He is one of the best leg-spinner in the world in the T20 format. Rashid Khan can also hit some big shots batting down the order. In the last match, he scored 40 runs from just 18 balls and picked up 1 wicket. He has already picked up 7 wickets this season and scored a total of 71 runs this season.

Jonathan Wells:
He is a very consistent batsman and had a perfect last season. He has continued his form in this season too and scored 26 runs in the previous match and has scored a total of 187 runs in this season.

Michael Neser:
He is a bowling all-rounder who can score some handy runs down the order. He hasn’t played any match this season. In the last season, he picked up 11 wickets and scored 68 runs for the team.

Peter Siddle:
This veteran pacer bowls at a perfect pace and can pick up wickets at a crucial time. He picked up 2 wickets in the last match. He has picked up a total of 5 wickets this season.

Billy Stanlake:
He is a decent pace bowler and has the wicket-taking ability with his pace and bounce. He picked up 1 wicket in the last match and is not in his best form.

Phil Salt:
The hard-hitting batsman bats at the top of the order for the Strikers. Phil Salt made 406 runs with a strike rate of 161.11 in this year’s T20 Vitality Blast for the Sharks, but he is not looking in form this season. He got out for a duck in the last match. He has scored only 70 runs in this season.

If you liked Sydney Sixers vs Adelaide Strikers Dream11 Prediction, then follow us on Twitter for Dream11 Team and Fantasy Cricket Tips. You can also find us on Facebook.