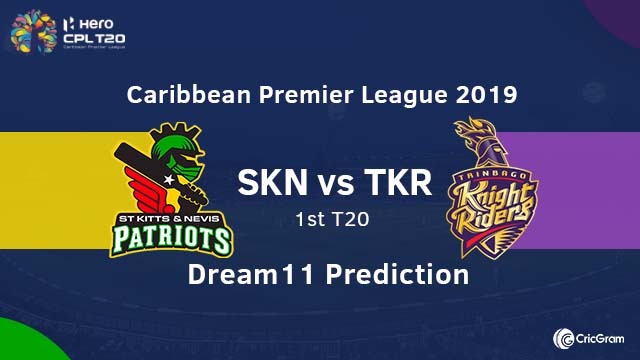 It’s the best time of the year as Carribean Premier League 2019 begins tomorrow. Expect a lot of hard-hitting entertainment in this month-long cricket carnival. The defending champions Trinbago Knight Riders will take on the St. Kitts and Nevis Patriots in the tournament opener. We will provide SKN vs TKR Dream11 Team Prediction, Preview and Probable Playing XI for the match.

Three-time champions Trinbago Knight Riders are the most successful team of Caribbean Premier League. They have retained the services of Dwayne Bravo, Keiron Pollard, Sunil Narine, Colin Munro, Darren Bravo, Ali Khan and have a well-balanced squad. However, they got a significant setback due to injury to their skipper Dwayne Bravo. In his absence, Kieron Pollard will lead the side. Sunil Narine and Jimmy Neesham are other star all-rounders who can be potential match-winners for them. They will hope to open their account defeating St Kitts and Nevis Patriots in the opening encounter of CPL 2019.

St Kitts and Nevis Patriots ended third on the points table in CPL 2018 and will be eager to claim the trophy this year. They also have a strong squad led by T20 specialist Carlos Brathwaite. The onus will be on Evin Lewis and Mohammad Hafeez to lead the batting while Carlos Brathwaite, Fabian Allen, and Rayad Emrit will hope to contribute in both the departments. Also, Sheldon Cottrell and Usama Mir will ensure to provide crucial breakthroughs to the team. They will expect to give a tough challenge to mighty Trinbago Knight Riders and get some early momentum going ahead in the league.

A batsmen friendly surface can be expected along with support for pace bowlers.

Devon Thomas will be a must-pick in TKR vs SKN Dream11 team as he will open the innings and can play attacking knocks.

Dinesh Ramdin is an experienced campaigner but has not performed well in recent times, and his batting position is also not fixed.

Keiron Pollard is in excellent form and performed well in IPL, Canada T20 league and T20 series against India. He will lead the side and hope to score plenty of runs.

Evin Lewis is a destructive opener and finally looked in good touch against India in ODI series. He will be the essential batsmen for St Kitts and Nevis Patriots.

Lendl Simmons is an attacking opener and has the potential to play big knocks. He can be the best option for captain in grand leagues.

Sunil Narine can be a match-winner in either of the departments. His recent form with the bat is poor.

J Neesham is one of the best all-rounders in world cricket currently and will be a must pick in TKR vs SKN Dream11 team.

M Hafeez is an experienced all-rounder. He can play the spin attack of Knight Riders in a better manner.

Skipper Carlos Brathwaite is also in good form. He can bowl in death overs and do late hitting for the team.

Seekkuge Prasanna is a spin all-rounder from Sri Lanka and is an average performer.

Sheldon Cottrell gave a glimpse of his talent to the world in WC’19 and is an excellent pacer. He can be lethal in initial overs.

Rayad Emrit performed brilliantly in Canada T20 league and is a good all-rounder.

USA Pacer Ali Khan is a good bowler of T20 format and can be a good option in the bowling category.

Khary Pierre is a talented spinner and performed exceptionally well in CPL 2018. He can perform well in the second innings when pitch slows down.

Pakistani Pacer M Hasnain is a hit-the-deck bowler and can trouble batsmen with his pace and bounce.

Other Options: A Joseph, Usama Mir

Alzarri Joseph returns after a long injury. He performed well for Mumbai Indians in IPL’19 taking six scalps in a single match.

Usama Mir is a good pacer from Pakistan and can be a grand league pick in TKR vs SKN Dream11 team.

If you liked Trinbago Knight Riders vs St Kitts and Nevis Patriots Dream11 Prediction, Then follow us on Twitter for Dream11 Team and Fantasy Cricket Tips. You can also find us on Facebook.