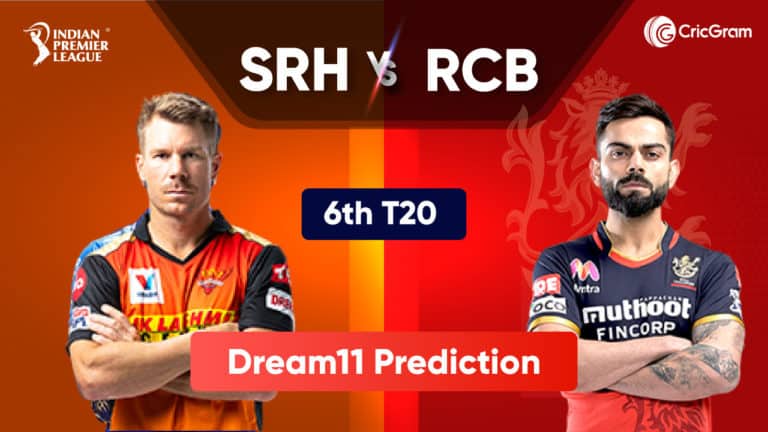 Sunrisers Hyderabad and Royal Challengers Bangalore will play against each other in the 6th match of IPL 2021 at MA Chidambaram Stadium, Chennai. We will cover SRH vs BLR Dream 11 Prediction, Dream11 Team, Fantasy Cricket Tips, Probable Playing XI, and match preview.

Sunrisers Hyderabad started their season on a disappointing note as they lost their first match by ten runs. They put up a decent performance with both bat and ball, but they would have won the game if they had put in some more extra efforts.

Skipper Warner opened the innings for the team and Wriddhiman Saha, and both got out early in a quick session without scoring much. Manish Pandey and J Bairstow batted well and scored the fifties, but both appeared to be a little slow in their approach.

In the middle-order, Mohammad Nabi and Vijay Shankar were expected to finish the game for SRH. Still, they disappointed everyone as they returned to the pavilion without contributing enough to the scoreboard. In the end, Abdul Samad batted brilliantly, but it was too late by then for SRH.

The bowling department, which was supposed to be the X-factor for the team, did not match the expectations. Rashid Khan and Mohammad Nabi bowled well, picking up two wickets each and controlling the runs’ flow. Bhuvneshwar and Natrajan also managed to pick up wickets, but they were expensive.

Sunrisers need to make some changes, especially in their batting order, to start winning the matches.

Royal Challengers Bangalore would be pleased right now as they won their first match against Mumbai Indians. Their bowling has improved a lot this time, and their batsmen are also solid as always.

Virat Kohli opened the innings along with Washington Sundar, which surprised everyone but probably from the next match, Devdutt Padikkal is likely to open the innings. Kohli batted decently, but Sundar struggled a lot to connect the ball.

At No.3, Rajat Patidar made his debut this season but got out early. After a disastrous form in the last season, Maxwell batted well in the first match and helped in the run chase for RCB. The main highlight of the game was the inning by AB de Villiers, who batted brilliantly but was unlucky to miss his fifty by just two runs.

The bowling unit performed brilliantly in the last match and was the main reason for RCB’s win. Harshal Patel bowled magnificently, picking up five wickets, and also controlled the flow of runs. Sundar and Jamieson also managed to pick up a wicket each.

Royal Challengers Bangalore appears to be in good form this season, but they need to make changes in their batting line-up if they want to continue their winning streak.

The pitch here is considered to be on the slower side and mostly favors the spin bowlers. Batting is somewhat tricky as the ball doesn’t come on to the bat so quickly, and also, the fast bowlers will have success if they bowl different variations. Dew might also play an essential factor.

Skipper Warner is a left-handed batsman and opens the innings for the team. He scored only three runs in the last match. D warner is very good Captaincy or Vc choice in SRH vs BLR Dream11 Team.

He is a right-handed batsman and batted in the middle-order in the last match. Bairstow scored 55 runs from 40 balls.

Manish is a right-handed batsman and has been batting at No.3 for SRH. He scored 61* runs but was very slow in his approach.

Rashid is a right-arm leg-break bowler and currently the No.1 spinner in the T20I format in the world. He bowled very well in the last match and picked up two wickets.

He is a Bowling Allrounder. J Holder played 18 IPL matches and took 19 wickets.

He is a right-arm medium-fast bowler and is well known for his swing deliveries. Bhuvneshwar was very expensive but managed to pick up a wicket.

Natarajan is a left-arm medium-fast bowler and made his debut last season. He managed to pick up a wicket in the last match and was in very good form for the national team.

He is the wicket-keeper batsman of the team and is a decent striker of the ball. Saha scored only seven runs in the last match.

He is an all-rounder and is equally good with both bat and ball. Nabi scored 14 runs and managed to pick up two wickets in the last match.

Sandeep is a right-arm medium-fast bowler and was very expensive and went wicketless in the last match.

He is a right-handed batsman and can also bowl a few overs of medium pace if required. Shankar scored 11 runs and went wicketless in the last match.

Samad will play a key role for the franchise this season in the death. He hit some magnificent sixes against Pat Cummins in the last game and will be a player to watch out for this season.

Jadhav is a right-handed batsman and will be playing for SRH for the first time. He did not play the last match.

He is a right-handed batsman and generally bats in the middle-order. Williamson did not play the last match.

King Kohli is opening the innings for the team this season. He batted decently scoring 33 runs in the last game and will be a great choice of Captain and Vice-Captain in SRH vs RCB Dream11 Team.

ABD is also called Mr.360 in the world of cricket. In the last match, he played brilliantly scoring 48 runs from just 27 balls.

He is a left-handed batsman and opens the innings for the team. Devdutt made his debut last season and impressed everyone with his performance. He did not play the last match.

Maxwell is a right-handed batsman who bats destructively and also bowls a few overs of spin. He batted well scoring 39 runs in the last match.

He is a right-arm leg-break bowler and consistently picks up wickets. Chahal was expensive and went wicketless in the last match.

Jamieson is a right-arm medium-fast bowler and can also play some big shots. He bowled decently picking up a wicket.

He is a right-arm fast bowler and can also be handy with the bat down the order. Harshal bowled exceptionally well in the last match picking up 5 wickets for just 27 runs in his four overs.

He is an all-rounder who is equally good with both bat and ball. Christian scored only one run and was also expensive with the ball.

He could really be effective in his home ground in Chennai. He will bowl in the powerplay. Sundar opened in the last game but is likely to bat lower down the order after the return of Devdutt Padikal in the Playing 11. He picked up 1 wicket in the last game.

He is a right-arm fast bowler. Siraj bowled well but went wicketless but is in a brillant form recently.

This match is a risky on Dream11 it is good to play only Grand League in this match.