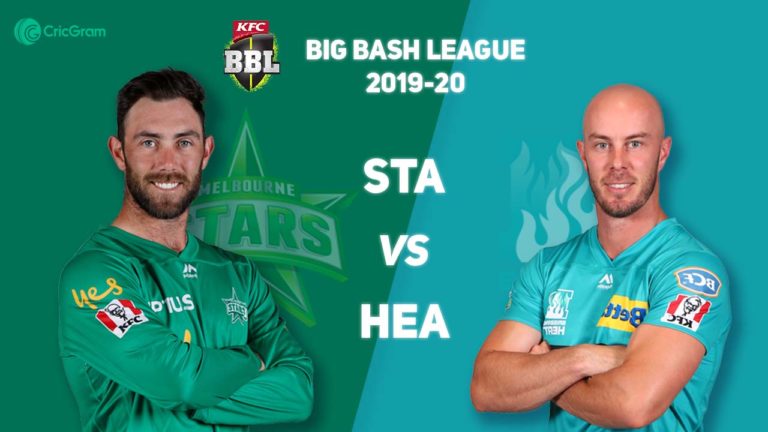 Melbourne Stars will take on Brisbane Heat in the 53rd match of Big Bash League 2019-20 at Melbourne Cricket Ground in Melbourne. We will provide STA vs HEA Dream11 Prediction, Match Preview, and Probable Playing XI of the match.

Melbourne Stars are having a good time as they are currently at the 1st position on the points table with 10 wins and 3 losses and a total of 20 points.

In the last match, bowling first, Stars picked up a wicket in the power play for 38 runs. They picked up 2 more wickets in 7th and 9th overs and put pressure on the opposition but after that, they gave away quite a few runs and managed to pick up one more wicket in the 14th over and the score was 91 runs. In the death overs, Stars bowled pretty badly and went for a good amount of runs and the opposition scored 162 runs in 20 overs for the loss of 4 wickets. Clint Hinchliffe bowled really well and picked up 3 wickets for 19 runs in his 3 overs and Maxwell managed to pick up 1 wicket.

With 163 to chase and with the batting line up of Stars, it was going to be a good contest. They lost the wicket of inform batsman Marcus Stoinis for 5 runs in the 2nd over. Stars lost the wicket of Nic Maddinson in the 6th over who scored 7 runs and in the very next over they lost the wicket of Nick Larkin who scored 19 runs. Even Maxwell got out for 19 runs in the 10th over and Stars were in a lot of trouble. They were losing wickets at regular intervals and were not able to score runs freely. Handscomb alone batted at the other end and fought for the team by scoring 65* runs from 39 balls but it was not enough as Stars were able to score only 151 runs in 20 overs and lost the match by 11 runs.

Stars have already qualified for playoffs but have lost the previous two matches, so they would want to win their next match against Brisbane Heat and complete their league stage on a winning note.

Heat is having a tough time this season as they are currently at 7th position on the points table with 5 wins and 7 losses and a total of 10 points.

In the last match, batting first Heat lost the big wicket of Chris Lynn in the 3rd over who scored just 7 runs. They lost 2 more wickets of Matt Renshaw 12 runs and Sam Heazlett 15 runs within the power play for 36 runs and looked in deep trouble. In the very next over they lost the wicket of Labuchagne who scored just 3 runs. The heat was losing wickets at regular intervals but AB de Villiers and Ben Cutting batted sensibly for quite a while by scoring 25 and 16 runs respectively but they too got out after a few overs. In the end, James Pattinson scored quick 27 runs and helped Heat score 126 runs in 20 overs.

With 126 runs to defend, it was a tough task for the bowlers to defend such a small total. They never looked in rhythm right from the beginning of the innings and just gave away runs. They managed to pick up only 2 wickets and the opposition chased down the target in 16 overs and Heat had to face defeat by 8 wickets. Ben Laughlin and James Pattinson picked up 1 wicket each.

They need to win their next two matches to stay in the competition to playoffs.

Average 1st innings score: 159 (In the 4 matches at this venue so far this season)

Average 2nd innings score: 149 (In the 4 matches at this venue so far this season)

This pitch is generally considered to have a good pace and bounce and batsmen can also play big innings if they get settled on the crease. Stoinis scored 147* runs at this venue this season. Apart from that, there haven’t been any high scoring matches at this venue.

Glenn Maxwell:
He is a batting all-rounder but is mostly known for his destructive batting. Maxwell has a wide range of shorts and can smash the bowlers all over the park. He scored 19 runs and picked up 1 wicket in the last match and has scored a total of 372 runs and picked up 7 wickets so far in this season.

Marcus Stoinis:
He is one of the top all-rounders in the Big Bash League. Stoinis is equally good with both bat and ball. He opens the batting for Melbourne Stars and scored 7 runs in the previous match and has scored a total of 587 runs so far and is the current leading run-scorer in this season but is not bowling any overs this season.

Nathan Coulter-Nile:
He is an all-rounder and equally good with the bat and ball. Nathan has played 8 matches so far in this season and picked up 7 wickets and scored 43 runs.

Adam Zampa:
He is a right-arm leg-spin bowler and missed few matches this season due to national duty. Zampa played 8 games this season and has picked up a total of 10 wickets so far. He went wicketless in the last match.

Peter Handscomb:
He is the wicket-keeper batsman for Melbourne Stars and wasn’t able to play few matches due to national commitments. He has batted in 7 innings this season and has scored 151 runs so far. Peter scored 65* runs from 39 balls in the last match.

Sandeep Lamichhane:
This young lad is a brilliant leg spinner and adapts to conditions very quickly. He went wicketless in the previous match and has picked up a total of 12 wickets so far in this season.

Daniel Worrall:
He is a medium-fast bowler and bowls at a decent pace and wicketless in the last match. D Worrall has picked up a total of 7 wickets so far in this season.

Clint Hinchcliffe:
He is a bowling all-rounder who bowls left-arm spin and has bowled decently so far in this tournament. Clint has bowled in 7 innings this season and has picked up 8 wickets so far. In the last match, he picked up 3 wickets.

Chris Lynn:
Skipper Lynn is a destructive batsman and is known for his big shots and massive strike. He scored 7 runs in the last match and has scored a total of 339 runs so far in this season. Lynn is an excellent Captain or Vc choice for STA vs HEA Dream11 Team.

AB de Villiers:
One of the world-class batsmen made his debut in the Big Bash League this season. ABD scored 25 runs in the last match and has scored a total of 70 runs so far in the 3 matches he played.

Matt Renshaw:
He is a very talented batsman and can also bowl 1-2 overs if required. Renshaw scored 12 runs in the last match and has scored a total of 27 runs so far in this season.

Marnus Labuschagne:
He is a right-handed batsman and hasn’t played much of Big Bash as he has played only 7 innings and scored 42 runs. Marnus played his 1st match this season and scored 3 runs.

Ben Cutting:
He is an all-rounder who can hit some big shots down the order and bowl at a perfect pace too. Cutting went wicketless in the last match but scored 16 runs and has scored 143 runs and picked up 9 wickets so far in this season.

Josh Lalor:
He is a left-arm medium-pace bowler and can pick up some early wickets. Lalor went wicketless in the last match and has picked up a total of 11 wickets so far in this season. He did not play the last match.

Sam Heazlett:
He is an opening batsman for Heat and has played 6 matches in this season and scored 109 runs so far. In the last match, he batted well and scored 15 runs.

Mujeeb Ur Rahman:
This 18-year-old right-arm off-spinner from Afghanistan has played several T20 leagues across the world. He has played 3 matches so far in this season, and he is yet to pick up a wicket.

If you liked Melbourne Stars vs Brisbane Heat Dream11 Prediction, then follow us on Twitter for Dream11 Team and Fantasy Cricket Tips. You can also find us on Facebook.