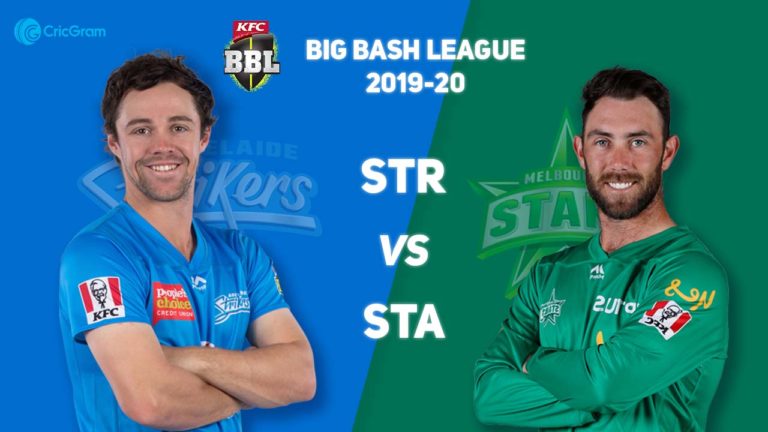 Adelaide Strikers will take on Melbourne Stars in the 48th match of Big Bash League 2019-20 at Adelaide Oval in Adelaide. We will provide STR vs STA Dream11 Prediction, Probable Playing XI, and Fantasy Cricket Tips.

Adelaide Strikers won the last head-to-head encounter between both teams in Big Bash League 2019-20 by 4 runs.

Strikers are currently having a good as they are at 3rd position on the points table with 6 wins and 4 losses and a total of 13 points.

In the last match, batting first Strikers lost the wicket of Philip Salt for 13 runs in the 3rd over and lost the wicket of Jake Weatherald for 5 runs in the 5th over. They were 24 runs for 2 wickets in the 5thover and looked in trouble, but Travis Head 79 runs from 40 balls, and Jonathan Wells 45* runs batted brilliantly in the middle overs and steadied the innings for Strikers. In the end, Mathew Short scored 33 runs and helped Strikers post a total of 186 runs in 20 overs.

With 186 to defend, Strikers picked up 2 wickets in the power play for just 36 runs. But after that, they gave many runs in the middle overs and managed to pick up only one wicket. In the death overs, they bowled brilliantly by picking up 3 wickets and also restricted the opposition to a total of 176 runs and won the match by 10 runs. Wes Agar bowled brilliantly and picked up 4 wickets for 33 runs in his 4 overs. Michael Neser and Peter Siddle picked up 1 wicket each.

They would be hoping to win this match against Melbourne Stars and continue their winning streak.

Stars are having a great time this season as they are currently at the top of the points table with 10 wins and 2 losses and a total of 20 points. They have qualified for the playoffs this season.

In the last match bowling first, Stars started bowling decently, and after 3.1 overs rain interrupted the match, and as a result, the game was reduced to 14 overs per side. In the 5th over, they picked up 2 wickets and put pressure on the opposition. But after that, they gave away too many runs and managed to pick up 2 wickets in the very last over, but by then the damage was done by the opposition as they had scored 143 runs in 14 overs and by the DLS rules the target was set to 147 runs in 14 overs. Sandeep Lamichhane picked up 2 wickets, and Daniel Worrall managed to pick up 1 wicket.

With 144 runs to chase in 14 overs, Stars started pretty well but lost the wicket of Cartwright in the 4th over who scored 21 runs from 10 balls. Nic Maddinson 16 runs, and Glenn Maxwell 12 runs couldn’t help the Stars. It was Stoinis alone who scored 62 runs from 37 balls but wasn’t enough as they managed to score a total of 125 runs in 14 overs and lost the match by 21 runs.

They would want to win this match against the Strikers and get back to their winning ways before the playoffs.

Average first innings score: 144 (In the last 4 games at this venue this season)

Average second innings score: 129 (In the previous 4 games at this venue this season)

The pitch is considered to be good for batting, but at the same time, a lot of wickets have been taken at this venue in this season.


In the last match played here, Strikers chased down the target without losing any wicket. Strikers have won 3 out of the 5 games played at this venue.

Alex Carey:
He is the wicket-keeper batsman for Strikers and missed few matches this season due to national duty. Carey played 7 games in this season and scored a total of 266 runs so far in this season.

Jake Weatherald:
This left-handed batsman has started this season well and played a sensible knock whenever required for his team. In the last match, he scored 5 runs and has scored a total of 337 runs so far in this season.

Rashid Khan:
He is one of the best leg-spinner in the world in the T20 format. Rashid Khan can also hit some big shots batting down the order. In the last match, he did not get to bat and also went wicketless. Rashid has already picked up 16 wickets and scored a total of 115 runs so far in this season.

Jonathan Wells:
He is a very consistent batsman and had a perfect last season. Wells has continued his form in this season too and scored 45* runs in the previous match and scored a total of 351 runs so far in this season.

Michael Neser:
He is a bowling all-rounder who can score some handy runs down the order. M Neser picked up 1 wicket in the last match and picked up a total of 7 wickets so far in this season.

Peter Siddle:
This veteran pacer bowls at a perfect pace and can pick up wickets at a crucial time. Siddle picked up 1 wicket in the last match and has picked up a total of 12 wickets so far in this season.

Philip Salt:
He is an attacking opener and has plenty of match-winning knocks in County Cricket. He struggles heavily against spin bowling and has been able to play only two good knocks yet in this season.

Wes Agar:
He is a right-arm fast bowler and bowls at a good pace. Wes Agar has bowled decently and has picked up 11 wickets so far in this season. He bowled brilliantly and picked up 4 wickets in the last match.

Glenn Maxwell:
He is a batting all-rounder but is mostly known for his destructive batting. Maxwell has a wide range of shorts and can smash the bowlers all over the park. He scored 12 runs and went wicketless in the last match and has scored a total of 353 runs and picked up 6 wickets so far in this season.

Marcus Stoinis:
He is one of the top all-rounders in the Big Bash League. Stoinis is equally good with both bat and ball. He opens the batting for Melbourne Stars and scored 62 runs in the previous match and has scored a total of 580 runs so far and is the current leading run-scorer in this season but is not bowling any overs this season.

Adam Zampa:
He is a right-arm leg-spin bowler and missed few matches this season due to national duty. Zampa played 7 games this season and has picked up a total of 10 wickets so far. He is in his best form presently and will be a must-pick in STA vs STR Dream11 team.

Peter Handscomb:
He is the wicket-keeper batsman for Melbourne Stars and wasn’t able to play few matches due to national commitments. He has batted in 6 innings this season and has scored 86 runs so far. Peter can be the best choice as captain in grand leagues.

Hilton Cartwright:
He is a batting all-rounder who can bowl a few overs of medium pace. Cartwright played a cameo in the last match by scoring 21 runs and has scored a total of 230 runs so far in 8 innings that he batted and appears in good form.

Sandeep Lamichhane:
This young lad is a brilliant leg spinner and adapts to conditions very quickly. He picked up 2 wickets in the previous match and has picked up a total of 12 wickets so far in this season.

Daniel Worrall:
He is a medium-fast bowler and bowls at a decent pace and picked up one wicket in the last match. D Worrall has picked up a total of 7 wickets so far in this season.

If you liked Adelaide Strikers vs Melbourne Stars Dream11 Prediction, then follow us on Twitter for Dream11 Team and Fantasy Cricket Tips. You can also find us on Facebook.