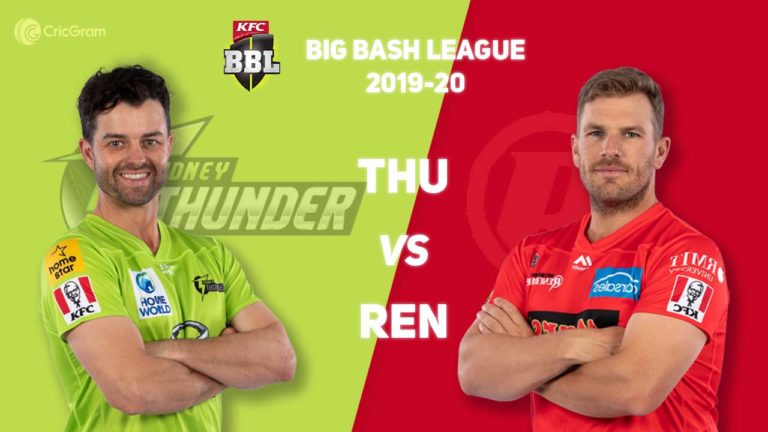 Sydney Thunder will take on Melbourne Renegades in the 37th match of Big Bash League 2019-20 at Manuka Oval in Canberra. We will provide THU vs REN Dream11 Prediction, Probable Playing XI, and Fantasy Cricket Tips.

Thunder was brilliant at the start of the season and played well, but now they are struggling a bit. They are currently at the 6th position in the points table with 4 wins and 4 losses and a total of 9 points.

In the last match, bowling first, Thunder managed to pick up only 1 wicket in the power play for 51 runs. They managed to pick up two more wickets in 8th and 12th overs, but after that, they gave away runs until the 18th over. After that, they bowled well and picked up 3 wickets in the last 3 overs and restricted the opposition to a total of 162 runs. Daniel Sams and Chris Morris picked up 2 wickets each, Brendan Doggett and Liam Bowe picked up 1 wicket each.

With 163 runs to chase, Thunder started their innings brilliantly, and both the batsmen added 96 runs to the 1st wicked. Usman Khawaja scored 35 runs, and Alex Hales scored 55 runs. After that, they lost few quick wickets, but Alex Ross 32 runs and Chris Morris 17 runs made Sydney Thunder win the match by 4 wickets.

Thunder would be hoping to win this match against the Renegades and climb up the points table.

Renegades are having an adamant time this season as they have lost all the nine matches that they played so far and are currently at the bottom of the points table, and it looks like they are out of the competition for playoffs.

In the last match, bowling first, Renegades gave away a lot of runs in the beginning. They gave away 59 runs in the power play and picked up 2 wickets. They managed to pick up 2 more wickets in the 9th and 11th over, but after that, they gave away runs and weren’t able to pick up wickets until the last over where they picked up 2 more wickets and restricted the opposition to a total of 173 runs in 20 overs. Samit Patel, Mohammed Nabi, Joe Mennie, Jack Wildermuth, Cameron Boyce picked up 1 wicket each.

With 173 runs to chase, Renegades lost 2 wickets in first 2 overs and looked in trouble, but Shaun Marsh and Beau Webster steadied the innings by scoring 21 runs and 49 runs, but they batted pretty slowly. Renegades batted decently until 12th over, but after that, they lost 6 wickets for just 24 runs and were all out for 110 runs. No other batsmen scored in double digits except for Marsh and Webster, and as a result, they lost the match by 63 runs.

Renegades would want to win this match against Sydney Thunder and have few wins to their name this season.

Average 1st innings score: 161 (In the only game played at the venue this season)

Only 1 match has been played here in this season, was abandoned due to smog.

There is a slight chance of rain on the matchday.

Callum Ferguson:
Skipper Ferguson bats at one down for Sydney Thunder and had continued his form from the last season and scored seven runs in the previous match and has scored a total of 295 runs this season. He is must pick in THU vs REN Dream11 Team.

Usman Khawaja:
This left-handed batsman is a good striker of the ball and plays according to the situation of the innings. He opens the batting for Sydney Thunder and scored 35 runs in the last match and has scored a total of 247 runs in this season.

Alex Hales:
He is an opening batsman alongside Khawaja and is known for his big-hitting. Once he gets comfortable on the crease, he can smash bowlers all around the park. Hales scored 55 runs in the last match and has scored a total of 223 in this season.

Chris Morris:
The experienced all-rounder bowls at a perfect pace and can hit big shots too. Morris picked up 2 wickets in the last match and scored 17 runs. He has picked up 10 wickets this season. Chris Morris is must pick in THU vs REN Dream11 Team.

Daniel Sams:
Sams is a bowling all-rounder. He bowls well and picked up 2 wickets and scored 1 run in the last match and has picked up 17 wickets in this season. Sams is currently the leading wicket-taker in the big bash league.

Shaun Marsh:
He is one of the most successful batsmen in the history of the Big Bash League. Marsh has an overall average of above 45 and continued his form in this season too, and scored a total of 309 runs. In the last match, he scored 21 runs.

Beau Webster:
He is a batting all-rounder and bats in the middle order for Renegades and can also bowl a few overs of spin if required. Webster played well in the last match and scored 49 runs and has scored a total of 243 runs in the 7 innings he played.

Marcus Harris:
He is a left-handed Australian batsman. Harris has played 6 matches this season and has scored a total of 89 runs. In the last game, he scored 5 runs.

Mohammed Nabi:
He is one of the top all-rounders in the world and has played several leagues across the globe. Nabi has played 1 match this season and picked up 1 wicket and scored 6 runs.

Daniel Christian:
He is an excellent all-rounder in the T20 format and has played several leagues across the world. He hasn’t looked great this season. In the last match, he scored 2 runs and went wicketless. He has scored 95 runs but hasn’t picked up wickets in this season.

Cameron Boyce:
Boyce is a bowling all-rounder who can hit some big sixes batting down the order. He picked up 14 wickets and scored 146 runs, which include a fifty in the last season. He picked up 1 wicket in the previous match and has picked up a total of 7 wickets so far this season.

Samit Patel:
He is an all-rounder and is equally good with the bat and ball. Samit scored 8 runs in the last game and picked up 1 wicket. He has picked up 2 wickets so far in this season.

If you liked Sydney Thunder vs Melbourne Renegades Dream11 Prediction, then follow us on Twitter for Dream11 Team and Fantasy Cricket Tips. You can also find us on Facebook.