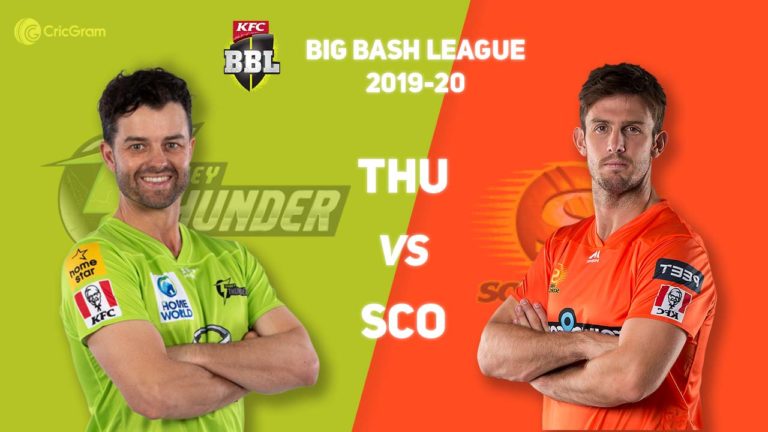 Sydney Thunder will take on Perth Scorchers in the 54th match of Big Bash League 2019-20 at Sydney Showground Stadium in Sydney. We will provide THU vs SCO Dream11 Prediction, Probable Playing XI, and Fantasy Cricket Tips.

Thunder was brilliant at the start of the season and played well, but now they are in a very tough situation. They are currently at the 7th position in the points table with 5 wins and 11 losses and a total of 11 points.

In the last match, bowling first Thunder picked up 1 wicket in the very first over, but after that, they just gave away runs and managed to pick up the 2nd wicket in the 11th, and the opposition had scored 99 runs. After that, Thunder managed to pick up wickets at regular intervals, but they couldn’t control the flow of runs and allowed the opposition to score a total of 185 runs in 20 overs for the loss of 6 wickets. Daniel Sams bowled brilliantly and picked up 4 wickets for 34 runs in his 4 overs. Arjun Nair also bowled pretty well as he picked up 2 wickets for 19 runs in his 3 overs.

With 186 runs to chase, Thunder lost the wicket of Khawaja for in the 3rd over who scored 3 runs. But they maintained a reasonable run rate and scored 55 runs in the power play without losing further wickets. In the 8th over Thunder lost the wicket of skipper Ferguson for 12 runs. Alex Hales 63 runs from 42 balls and Alex Ross 36 runs from 27 balls batted quite well, and the target looked chase able at one stage. Once Alex Hales got out, all the other players just fell like a pack of cards, and they go all out for 128 runs in 17.3 overs, and Thunder lost the match by 57 runs.

Thunder need to win their next match against Perth Scorchers to keep their hopes for playoff alive in this season. It is a do or dies situation for Sydney Thunder.

Scorchers are in a tricky position as they are currently at 4th position on the points table with 6 wins and 7 losses and a total of 12 points.

In the last match, bowling first Scorchers gave away 60 runs in the power play and failed to pick up at least one wicket. In the 7th over and 10th over, they picked up wickets and made a comeback into the match. They bowled the last overs slightly better as they gave away only 83 runs and picked up 3 wickets. Scorchers restricted the opposition to a total of 181 runs in 20 overs for the loss of 5 wickets. Mathew Kelly and Ashton Agar bowled quite well and picked up 2 wickets each. Chris Jordan managed to pick up 1 wicket.

With 182 runs to chase, Scorchers lost the wicket of Josh Inglis in the 4th over who scored 5 runs. Kurtis Patterson 17 runs, Cameron Bancroft 12 runs, and Jhye Richardson’s cameo of 16* runs were not of much help to the Scorchers. It was Liam Livingstone alone who scored 79 runs from 54 balls and fought for the team, but once he got out, the match was almost over for Scorchers. They managed to score a total of 165 runs and lost the game by 16 runs.

Scorchers need to win their next match against Sydney Thunder as there is a danger that if they lost this match, then they would be out of the competition for playoffs.

Average 1st innings score: 152 (In the 2 completed games at this venue so far in this season)

Average 2nd innings score: 155 (In the 2 completed games at this venue so far in this season)

At the Sydney Showground Stadium In 2 matches, overs reduced due to rain so we did not include those matches in average scores.

The pitch has been neutral here where batsman scored runs, and at the same time, bowlers picked up plenty of wickets. There hasn’t been any high scoring match here at this venue in this season.

Sydney Thunder has won 2 out of the 4 matches that have been played at this venue.

There is a 50% chance of rain on the matchday so we can expect a match with a reduction in the number of overs per side.

Daniel Sams:
Sams is a bowling all-rounder. He bowls well and picked up 4 wickets in the last match and has picked up 24 wickets so far in this season. He is currently the leading wicket-taker in the big bash league.

Alex Hales:
He is an opening batsman alongside Khawaja and is known for his big-hitting. Once he gets comfortable on the crease, he can smash bowlers all around the park. Hales played brilliantly by scoring 63 runs from 42 balls in the last match and has scored a total of 402 runs so far in this season.

Chris Morris:
The experienced all-rounder bowls at a perfect pace and can hit big shots too. Morris went wicketless in the last match. He has picked up 14 wickets so far in this season.

Usman Khawaja:
This left-handed batsman is a good striker of the ball and plays according to the situation of the innings. He opens the batting for Sydney Thunder and scored 3 runs in the last match and has scored a total of 287 runs so far in this season.

Callum Ferguson:
Skipper Ferguson bats at one down for Sydney Thunder and had continued his form from the last season and scored 12 runs in the previous match and has scored a total of 326 runs so far in this season.

Alex Ross:
He is a right-hand batsman and bats in the middle order sensibly according to the situation of the match. Ross scored 36 runs in the previous game and has scored 275 runs in the 11 innings he has batted.

Arjun Nair:
He is a bowling all-rounder who can score some handy runs down the order. Nair has performed decently so far in this season as he has picked up 9 wickets and scored 49 runs. In the last match, he bowled brilliantly and picked up 2 wickets.

Liam Livingstone:
He is an outstanding batsman, especially in the T20 format, and is a good striker of the ball and is generally known for scoring runs quickly and scored 79 runs from 54 balls in the last match. Liam has scored a total of 405 runs and picked up four wickets so far in this season.

Mitchell Marsh:
He is a perfect all-rounder and can be the match-winner with both bat and ball for his team. Marsh scored 4 runs and went wicketless in the last match and has scored a total of 371 runs so far in the 10 games he played this season.

Morne Morkel:
He is one of the veteran fast bowlers in the world cricket and is well known for his pace and bounce. Morne has retired from International cricket but still playing few T20 leagues and is performing well. He will be making his debut in the Big Bash League this season.

Josh Inglis:
He is the opening batsman for Scorchers and has played decently in this season so far. Josh scored 5 runs in the last match and has scored a total of 387 runs so far in this season.

Jhye Richardson:
He is a very talented fast bowler and bowls at an excellent pace and picks up wickets consistently. In the last match, he went wicketless and has picked up a total of 14 wickets so far this season.

Ashton Turner:
He is a right-handed batsman and is capable of hitting big shots all over the park. Turner has played only 6 innings this season as he had to miss out few matches due to national commitments and has scored 86 runs so far in this season. In the last game, he scored 2 runs.

Ashton Agar:
He is a left-arm spin bowler and can also score some handy runs when required for the team. Agar missed out few matches due to national commitments and has played 8 innings and picked up 6 wickets so far in this season. In the last game, he picked up 2 wickets and scored 10 runs.

Mathew Kelly:
He is a right-arm medium-fast bowler and has played 8 matches in this season and performed decently. Kelly went wicketless in the last game and has picked up a total of 8 wickets so far in this season.

Fawad Ahmed:
He is a right-arm leg spinner and bowled pretty well in the last match but went wicketless. Fawad has picked up a total of 14 wickets so far in this season.

Cameron Bancroft:
He is a decent batsman and played some good innings for his team last season. Bancroft scored 12 runs in the previous match and has scored a total of 255 runs so far in this season.

If you liked Sydney Thunder vs Perth Scorchers Dream11 Prediction, then follow us on Twitter for Dream11 Team and Fantasy Cricket Tips. You can also find us on Facebook.