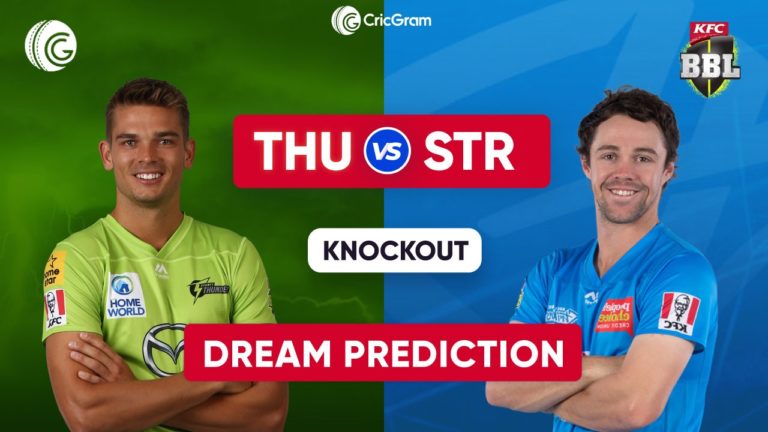 Sydney Thunder vs Adelaide Strikers will play in the Knockout game of the Big Bash League 2021-22 at Melbourne Cricket Ground, Melbourne. We will cover THU vs STR Dream11 Prediction, Probable Playing 11, and Fantasy Cricket Tips.

Sydney Thunder finished at the 3rd position on the Big Bash League with nine wins and five losses and a total of 35 points.

Usman Khawaja and Alex Hales batted well scoring 77 runs and 44 runs and provided a good partnership. In the middle-order, Jason Sangha, Alex Ross, Daniel Sams, and Matthew Gilkes. In the end, Cutting and McAndrew scored some runs and helped Thunder to post a good total.

The bowlers made a comeback in the last match as Gurinder Sandhu and Tanveer Sangha picked up three and two wickets respectively. Daniel Sams got one wicket.

Sydney Thunder has performed well this season and would be hoping to win the knockout.

Adelaide Strikers made a strong comeback towards the end of the league stage and qualified for the playoffs with 28 points.

The openers, Alex Carey and Matthew Short scored 67 and 89 runs and put up a brilliant partnership. All the remaining batsmen failed to score even more than ten runs.

The bowlers did a great job by getting the opposition all-out. Skipper Peter Siddle picked up four wickets in the last match. Harry Conway, Henry Thornton picked up two wickets, and Matthew Short, Fawad Ahmed picked up one wicket each.

Strikers have won five consecutive matches and would be hoping to win the Knockout.

(The average score is based on ten matches played at this venue this season.)

MCG has produced high-scoring games in recent matches. The batsmen have enjoyed batting in the 1st innings but struggled to score runs in the 2nd innings.

(The chasing team has won five out of the ten matches played at this venue this season.)

THU vs STR Head to Head

Skipper Khawaja played the first match of the season and scored 77 runs from 51 balls in the last game.

Sams was out for a duck in the last match but managed to pick up a wicket. He is very good Captain choice in THU vs STR Dream11 Team.

Jason Sangha looks slightly out of form as he scored only two runs in the last match.

Sandhu has performed well this season and picked up three wickets for 33 runs in the last match.

Sangha performed well after a couple of matches and picked up two wickets in the last game.

McAndrew was expensive and went wicketless in the last match.

Carey played his first match of the season and smashed 67 runs from 45 balls.

Short is the leading run-scorer for Strikers and scored 89 runs from 48 balls and picked up a wicket. Matthew Short is also a very good Captaincy choice in THU vs STR Fantasy Team.

Skipper Siddle is the leading wicket-taker this season and picked up four wickets for 32 runs in the last game.

Thornton is a right-arm fast bowler and has performed brilliantly this season and picked up two wickets in the last game.

Fawad is a right-arm leg-break bowler and managed to pick up a wicket in the last game.

Wells bats in the middle-order and is in good form this season but scored 12* runs in the last match.

Cockbain is a decent striker of the ball and has played well in one of the matches this season.