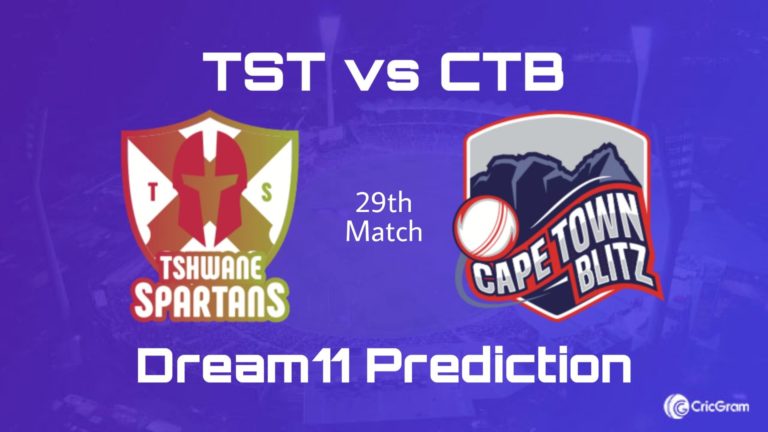 Tshwane Spartans are currently in the 3rd position in the points table with 3 wins and 21 points. But they had to face disappointment in the last three matches. They lost the third last match to Cape Town Blitz by 15 runs and also lost the second last match to Nelson Mandela Bay Giants by 6 wickets and their previous match was washed out. As Tshwane Spartans have lost two consecutive matches they would be really focusing on winning their next match against Cape Town Blitz because if they lose this match there is a possibility that they would be out of this tournament.

Cape Town Blitz has lost more matches than the matches they have won. They are second last on the points table with 4 wins and 17 points. They lost their last match against Nelson Mandela Bay Giants by 11 runs.

Bowling First, Cape Town Blitz bowlers gave away too many runs in the beginning of the innings but they were able to break the opening partnership of 136 runs and then they picked up wickets quickly and restricted the opponents to a total of 173 runs. Wahab Riaz bowled extremely well in the absence of Dale Steyn and picked up 3 wickets for just 19 runs in his 4 overs and Magala also picked up 2 wickets in that match. Both the openers Janeman Malan and Quinton de Kock gave a very good start to their chase by scoring 60 and 40 runs respectively but their middle order failed miserably and this led to a defeat by 11 runs. Though the chances of Cape Town Blitz making it to the Eliminator are quite less, they would still want to put up a good fight in their last match against Tshwane Spartans and try to make it to the Eliminator.

This track is slightly favorable to the bowlers and helps them pick up wickets but if batsmen play carefully they also have a chance of hitting big scores. There is a 60% chance of rain on the match day at this venue, so the chances of the match being played are less, even though the match is played there would be a reduction in a number of overs being played.

Only one match has been played at this venue out of the four matches and that match was won by Tshwane Spartans so they would be high on confidence and would want to win before their home crowd.

They have lost the two consecutive matches and the previous match was washed out. There might be some changes in their playing XI, Though Tony de Zorzi played well, there is a possibility that Dean Elgar would replace him in the next match.

After the loss in the previous match, Cape Town Blitz would definitely make some changes to their team. Their main attacking bowler Dale Steyn would replace Ayabulela Gqamane and there is also a chance that Aviwe Mgijma might replace George Linde.

AB de Villiers: World’s best T20I batsmen ABD will bat at one down and can destroy any bowling line-up if he is set and gets going. He has scored a total of 237 runs in 6 innings with three ’50s in it.

Dean Elgar: Opener Elgar is in good form recently and scored brilliant knocks of 88* runs and 57* runs in two matches and has scored total of 180 runs in 5 innings, though he has not played the last match there is a chance that he would be playing this match  and will be a must-pick in your fantasy team.

Tom Curran: Pace all-rounder Curran can bowl as well as bat and will be the best choice in grand leagues. He took a total of 5 wickets in the 6 matches he has played.

Heinrich Klaasen: Skipper is a good player of spin and can play attacking knocks. He scored 116 runs in 6 innings.

Morne Morkel: Veteran pacer Morkel has excellent pace and bounce and is in great form this season. He took 10 wickets in 6 innings and is the leading wicket-taker for Spartans and has a very good economy rate too.

Lungi Ngidi: Talented young pacer Ngidi has performed well for the nation and is also in great form lately. He took 9 scalps in 6 innings.

Pite van Biljon: He hasn’t got much batting chances this season but whenever he has come to bat he has proved himself and has scored 45, 62 and has scored a total of 112 runs in 4 innings that too at a good strike rate.

Quinton de Kock: He is the captain and opener for Cape Town Blitz and is known for scoring runs pretty quickly. He has scored a total of 244 runs from 9 innings this season.

Janeman Malan: He opens the inning alongside de Kock and can play big shots and also play big innings if he gets a good start. He has played some match-winning knocks. He is the leading run-scorer this season and has scored a total of 359 runs from 9 innings which involve scores like 99,75 and 60.

Dale Steyn: Dale Steyn is in tremendous form this season and is the leading wicket-taker with 15 wickets to his name and with an average of 15.13. He is a must pick in your Dream 11 team for TST vs CTB match.

Wahab Riaz: He is bowling all-rounder and has picked up 9 wickets and scored 50 runs in seven innings this season. He can do some big hitting down the order if needed.

Sisanda Magala: He is the attacking bowler along-side Steyn and has picked up 12 wickets this season for his team and almost picks up a minimum of 1 wicket every match.

David Bedingham: He bats one down for his team and has got the chance to pretty lately but he has ensured his place in the playing XI by scoring 44 and 53 runs in the two of the three innings he played.