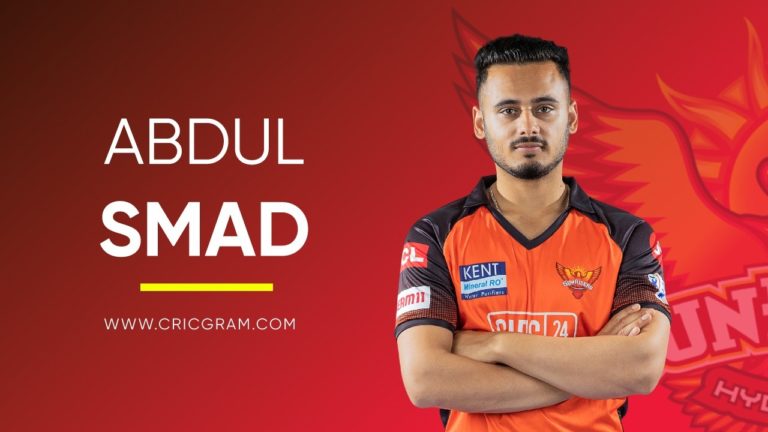 Abdul Samad is an Indian cricketer, who belongs to the Indian state of Jammu and Kashmir, he is known for his fast batting in the T20I format and has made an impact in short formate cricket, Abdul is a hardworking and amazing talented Indian cricketer, And he was the first selected in the IPL 2019 season at the age of 18 and was bought by Sunrisers Hyderabad for his base price of 20 lakhs. But unfortunately did not get a chance to play any IPL match that year.

His father’s name is Mohammed Farooq, and he was a volleyball player and now sells sports equipment. His mother’s name is Farzana Kausar. While the name of his elder brother of Abdul is Tayyab Farooq.

Abdul Samad is an all-rounder cricket player who is bowling a ‘ Right-arm leg break’, And apart from that, he is a right-handed attacking batsman.

Abdul Samad has been coached by Sports Council coach ‘Randhir Singh Manhas and his assistant ‘Raman Thaplu’. And apart from this, former Indian all-rounder Irfan Pathan has also been his coach.

Abdul was very fond of playing cricket from a very young age, so he learned the early qualities of cricket from his elder brother and father in his childhood, and after that when he was 12 to 13 years old, he joined the cricket academy. And from there by taking professional training of cricket he started playing domestic cricket for Jammu and Kashmir.

Abdul made his debut in first-class cricket on 9 December 2019 in the Uttarakhand vs Jammu and Kashmir match in Dehradun. After that, he started List A cricket with the Jammu and Kashmir vs Rajasthan match held in Jaipur on 7 September 2019.

Abdul made his debut in short format cricket (T20I) in the month of February 2019 in the match of Jammu and Kashmir vs Nagaland.

Abdul Samad was included for the first time in the IPL auction of the year 2019, And the Sunrisers Hyderabad team has included him in his team on his base price, but unfortunately, they did not get a chance to play any IPL match. And after that, he got a chance to make his IPL debut in the year 2020 against Delhi Capitals at the Sheikh Zayed Stadium in Abu Dhabi. And he hit a six and a four in his IPL debut match.

Although Abdul has not been able to play any special and long innings in IPL so far, but it is expected that he is going to have his blast in IPL very soon.