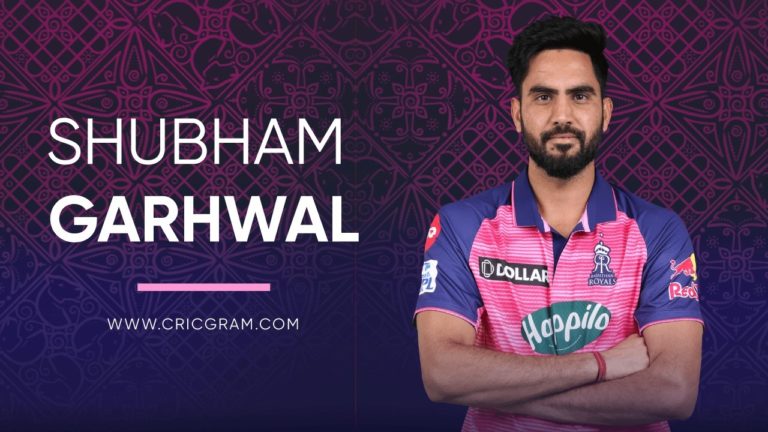 Shubham Garhwal is an Indian Batting all-rounder cricket player who is primarily known for his long-heating. And he has done such a feat many times in domestic cricket for Rajasthan and because of this he is getting a chance to play in a big T20 league like IPL, and he is part of the Rajasthan Royal team in IPL 2022.

The most important thing about Shubham is that he was not fond of playing cricket since childhood, he wants to become a government officer since childhood, but due to some incidents and his cricket coach, he is at this stage in the world of cricket today.

Shubham Garhwal biography: He is a Rajasthani Indian Cricket player who made his IPL debut with the Rajasthan Royals team, was born on May 14, 1995, in the city of Jodhpur, Rajasthan, and his full name is Shubham Shankar Garhwal. Shubham is primarily known for playing domestic cricket, first-class cricket, and IPL. And he is playing as an all-rounder in all formats of cricket.

Shubham came into the media limelight when he hit 240 runs in 74 balls in his club cricket, in which he hit 18 fours and 26 high-rise sixes. Since then, people started calling him by the name of Mini Gayle in the world of cricket.

Shubham is an all-rounder cricket player who is known for his left-handed batsman and slow left-arm orthodox bowling, and his role is to score big scores for each team i.e. he is the big heater batsman. And specializes in putting very long sixes, there were many problems in the initial phase, Shubham Garhwal used to play in attacking mode, due to which there was a fear of getting out early. But gradually after good hard work and control over himself, Shubham has now become a good player.

His coach has a big hand in making Shubham a good cricketer.

In fact, since childhood, his parents wanted to educate Shubham to become an engineer and a government officer, and for this, he was sent to Delhi so that he could become a good government officer by studying, but he was fond of becoming a cricket player. And after some days, his cricket coach called Shubham several times and convinced him that he can become a good player, and can also play for the Indian team in the coming times, and because of this After leaving his studies, Shubham worked hard day and night with his coach Pradoot Singh and Shahrukh, and as a result of that, Shubham is playing IPL cricket league, one of the most famous leagues of T20i in the world today.

And if he does well in IPL as an all-rounder, then he will be seen playing for the India team very soon.

Shubham considers India’s famous cricketer Yuvraj Singh as his idol and also has the power to bat like him, and he has been watching Yuvraj Singh’s cricket since he was 15 years old and also wants to become like him.

And apart from this, he has played many club cricket in his short cricket career in which he has done very well, and he is especially known for playing the short format.

After Seeing Shubham’s consistently good performances in Domestic crickets, BCCI kept Shubham in IPL mega auction 2022 and he has been included in the Rajasthan Royal team with his base price, and he made his IPL debut with the RR team in April 2022.

Q. What is the name of Shubham’s cricket coach?

Ans: Shubham’s cricket coach is Pradoot Singh and Shahrukh Pathan, and he has taken professional training in cricket under these coaches.

Q. What is the name of Shubham Garhwal’s IPL team?

Ans: Shubham will be seen playing with the Rajasthan Royal team in IPL and he was included in RR’s team in the auction of IPL in the year 2022.

Q. Where does Shubham Garhwal belong?

Ans: Shubham hails from the city of Jodhpur in the Indian state of Rajasthan and was born on 14 May 1995.