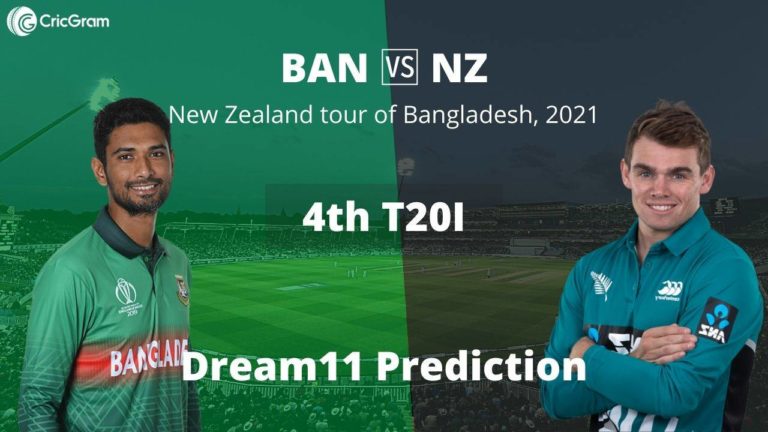 Bangladesh vs New Zealand will be playing in the 4th T20I at the Shere Bangla National Stadium, Dhaka.

They need to win at least one game out of the remaining two games to seal the series. They looked very poor with the bat in the last game and lost by 52 runs.

Bowling first, their bowlers did a decent job to restrict the visitors to a total of 128 runs. Saifuddin is continuing his good run in this series and picked up 2 wickets in the last game.

They bowled very well in the middle overs but leaked plenty of runs in the death overs. With the bat, no batter showed maturity and played bad shots. Mushfiqur Rahim tried to stick to one end and scored 20 runs from 34 balls. In the end, they were bundled out for 76 runs.

They will hope for a better show from their batters in this game and will look to seal the series.

They have still kept themselves alive in the series after a brilliant comeback in the last game. With the bat, their top order gave them a decent start.

They collapsed in the middle overs but Henry Nicholas and Tom Blundell played fantastic knocks of 36 runs and 30 runs and helped their team post a total of 128.

With the ball, their spinners Ajaz Patel and Cole McConchie were too good for the hosts and picked up 4 and 3 wickets respectively. Rachin Ravindra was also very economical and picked up a wicket. They were brilliant on the field as well with their catches.

They will continue this momentum and will look to stay alive in the series till the last game.

The Weather in Dhaka does not look pleasant and there is 70% chance of rain during the game.

The pitch in the series has improved a little in the last two games. Though Bangladesh got bowled out for 76 the pitch is decent to bat. As usual Spinners and fast bowlers are expected to get a lot of help from the surface.

(The H2H record is based on the last 2 years)

He will bowl his 4 overs in the middle overs and also bat in the top order. Shakib was brilliant in the first two games but was average in the last game but is a world-class player and can perform big on his day He is a perfect choice for C and VC in the BAN vs NZ Dream11 Team.

He has also been excellent in this series and is consistently picking up wickets for his team. Rahman bowled decently in the last game and picked up a wicket.

He is another very good pacer from the team and can also score few runs with the ball. Saifuddin will bowl in the middle and death. He was perfect in the last game and picked up 2 wickets.

He is another good spinner from the team. Hasan can also bowl in the powerplay. He bowled decently in the last game and picked up a wicket.

He is the skipper of the team and has been performing very well for the team. Mahmudullah picked up one wicket with the ball and scored 3 runs with the bat in the last game.

He will open the innings along with Naim and is a very aggressive batter. Das has looked poor in this series. He scored 15 runs in the last game.

He is one of the most experienced and talented players on the team. Rahim scored 17 runs in the last game and did not get any support from the other end.

He will open the innings for the team and also bowl 4 overs with the ball. Ravindra scored 20 runs with the bat and also picked up a wicket in the last game and is a good option for C and VC in BAN vs NZ Dream11 Prediction.

He is the skipper of the team and will bat in the top order. Latham was brilliant in the second game but managed to score only 5 runs in the last game.

He is a left-arm off-spinner who will bowl in the middle overs. Patel bowled one his career best spell in the last game and picked up 4 wickets.

He is a right-arm off-spinner. McConchie was also excellent in the last game and picked up 3 wickets.

He is a very talented left-handed batsman who will play the role of the finisher in this series. Nicholls played a wonderful knock of 36 runs in the last game.

He will open the innings for the team. Allen scored 15 runs in the last game and is a player to watchout for in this game.

His selection will be less since he went wicketless in the last game but can be a trump card pick in Bangladesh vs New Zealand 4th T20I.