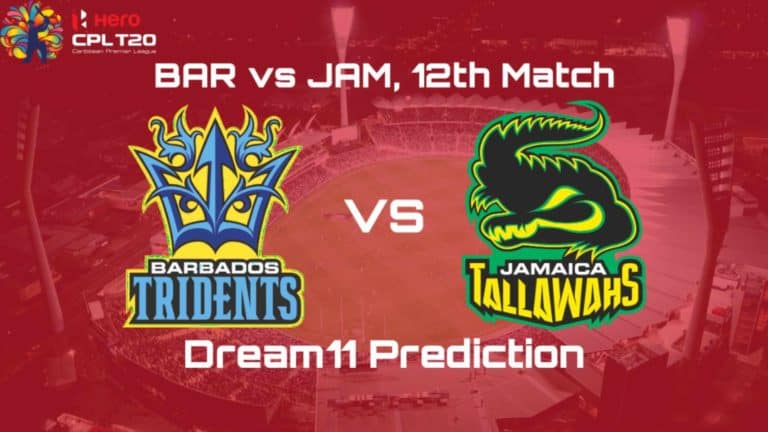 BAR vs JAM Dream11 Prediction, match preview and probable playing XI of the 12th match of CPL 2019. Jamaica Tallawahs will take on the Barbados Tridents in the twelfth encounter of CPL 2019 at Sabina Park in Jamaica.

Barbados Tridents have won one and lost one encounter till now in CPL 2019. They won their last battle against St Kitts and Nevis Patriots by 18 runs. Batting first, Leniko Boucher was the top scorer for his 62* run knock while Johnson Charles and JP Duminy scored 52 and 43* runs to take the team to a total of 186. In defense, Sandeep Lamichhane took three wicket-haul while Hayden Walsh and Jason Holder took two scalps each to ensure an 18-run win for the team. They will be eager to continue the winning momentum ahead and defeat Tallawahs tomorrow.

Jamaica Tallawahs have lost all four of their encounters yet in CPL 2019 due to poor performance from all bowlers except Oshane Thomas. They lost their last match to Trinbago Knight Riders by 41 runs. Bowling first, Tallawahs bowlers failed miserably resulting in a record-breaking target of 268. In Chasing the target, Glenn Phillips and Chris Gayle gave an excellent start to the team scoring 62 and 39 runs respectively but was not enough to chase the target. hIn addition, Javelle Glen and Raamal Lewis also scored late cameos of 34* and 37* but could only take the team to a total of 226. They will hope to open their account tomorrow defeating Barbados Tridents.

A batting-friendly track can be expected with assistance to hit-the-deck bowlers. At Sabina Park, Kingston, Jamaica batting first 180-190 runs is expected.

Glenn Philips was one of the top scorers in last season and will open the innings. He scored attacking 58 and 62 runs in previous two matches.

L Boucher is an average performer. However, He scored attacking 62* runs in the last match.

Chris Gayle is one of the world’s best T20I batsmen. He scored attacking 116 runs in third last encounter.

Alex Hales is a brilliant T20 opener and scores at quick-strike rate. He scored three half-centuries in recent T20 blast. However, He failed in both the encounters.

Johnson Charles is an attacking opener but a hit-or-miss type player. He scored 19 and 52 runs in two matches.

Chadwick Walton is an attacking batsman and is likely to bat at one down. He generally scores well and can be a good pick in Dream11 team. He scored 28, 73, 8 and 6 runs in four matches.

George Worker is a good kiwi allrounder. He can anchor an innings in the middle order and can bowl a few overs of left-arm orthodox. He scored unbeaten knock of 46 runs in the first match.

Johnathan Carter bats in the middle order for the team. If the top order fails, then he can be good punt for the match.

Jason Holder is an attacking batsman and can take wickets in a crucial situation for the team. He took two wickets in the last match.

JP Duminy will bat in the middle order and has played some match-winning innings in the past. He scored 20 and 43* runs in two matches.

Rovman Powell is a very attacking batsman and was in good form against team India in T20I series. He can also bowl a few overs. Powell scored 44 runs in second last match at a strike rate of 200. He retired hurt in the previous game and can be the risky pick for tomorrow.

Ashley Nurse is Right-arm off-break bowler and excellent finisher. He scored 40 runs in the first match.

S Lamichhane is a wicket-taking spinner and took three wicket-haul in the last match.

Oshane Thomas is an excellent T20I bowler and can take a plethora of wickets. He took four and three wicket-haul in two matches but failed in the last encounter. He will be a must pick in BAR vs. JAM Dream11 team.

Hayden Walsh is a right spin all-rounder. He took two wickets in the last match.

Josh Lalor is a left-arm seam bowler who has succeeded in the Big Bash League for the Brisbane Heat. He took one wicket in the last match.

Jerome Taylor is a lethal pacer and performed exceptionally well in T20 Blast. However, He has failed to take any wickets in four matches and has been very expensive.

Raamal Lewis is an average spinner and handy finisher. He scored 37* runs in the last match.

If you liked Barbados Tridents vs. Jamaica Tallawahs Dream11 Prediction, then follow us on Twitter for Dream11 Team and Fantasy Cricket Tips. You can also find us on Facebook.