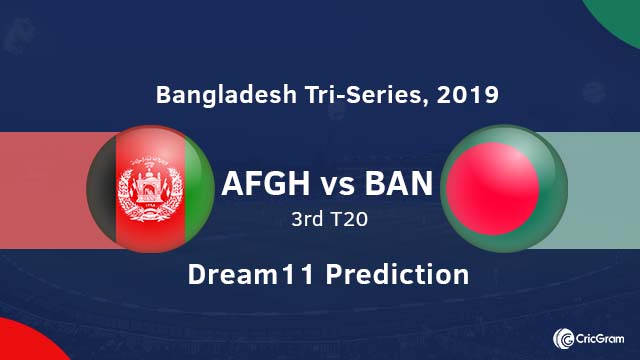 AFGH vs BAN Dream11 Prediction, match preview, top players and probable playing XI of the 3rd T20I match of Bangladesh Tri-Series 2019. Bangladesh will take on Afghanistan in the third encounter at Shere Bangla Stadium in Dhaka.

Team Afghanistan continued their dream run in T20I format with yet another win defeating Zimbabwe for an eighth consecutive time by 28 runs. Batting first, 17-year old young wicket-keeper Rahmanullah Gurbaz gave an excellent start to the team scoring 43 runs in 24 balls. After that, Najibullah and Nabi came to all guns blazing hitting seven sixes on the trot and took the team to a total of 197. Najibullah scored unbeaten 69 while Nabi scored 38 runs. Defending the target, Rashid Khan and Fareed Malik took two scalps each to restrict Zimbabwe at 169 and ensure another victory for their team. They will hope to continue their good run ahead defeating hosts Bangladesh tomorrow.

Bangladesh won the first T20I against Zimbabwe by three wickets in an 18-over match. Bowling first, Bangladesh bowlers put an excellent show to restrict Zimbabwe at 144. All bowlers made handy contributions taking one scalp each. However, Shakib Al Hasan was struck all around the ground resulting in a total of 49 runs in his quota of overs. In Chasing the target, Bangladesh batsman failed to make significant contributions and was limping on 29/4 before Afif Hossain, and Mosaddek Hossain came on the crease and scored 52 and 30* respectively to ensure victory for the hosts. They will expect for a better performance from batsman tomorrow against the lethal spin attack of Afghanistan.

Pitch is expected to support batsmen more. Bowlers will not find enough support from the surface. Small boundaries will further fuel run-making.

Scattered Thunderstorms are expected during the day, but there are high chances of the complete match.

Mushfiqur Rahim is the backbone of Bangladesh batting line-up and is in a consistent form. He can also score at a reasonable strike rate. He got out on a golden duck in the last match.

Liton Das will open the innings and is a reliable batsman. He can anchor big innings. He scored 19 runs in the last match.

Soumya Sarkar is an attacking batsman and good medium-pacer. He will be a must pick in AFGH vs BAN Dream11 team.

Najibullah Zadran is an attacking middle-order batsman and performed well in limited chances in WC’19 and CPL. He scored 30 ball-69* runs knock in the last match.

Ex-captain Asghar Afghan is a reliable batsman and scores at a reasonable strike rate. His recent form is also good. He scored 14 runs in the last match.

Hazratullah Zazai is a very attacking batsman, but he lacks consistency. He can make you a grand league winner one day.

Afif Hossain is an attacking batsman and competent spinner. He took three wickets in practice match and scored match-winning 52 runs in the first T20I.

Mahmadullah is an attacking middle-order batsman but does not perform consistently. He doesn’t bowl these days due to a shoulder injury.

Sabbir Rahman is a hit-or-miss type player. You can prefer him if you think Bangladesh top-order will collapse.

N Tarakai can bat at one down and is an average batsman.

Shakib Al Hasan is in the form of his life and was one of the top scorers of World Cup 2019. He also can destroy Zimbabwe line-up with his witty spin. However, He failed miserably in the last match.

Mohammad Nabi is one of the best T20I all-rounders. He can do hard-hitting for the team and can also bowl his quota of overs effectively. He is lethal with the ball against left-handers. Nabi scored 38 runs in just 18 balls yesterday.

Gulbadin Naib recently leads the side in WC’19. He is an attacking batsman and medium-pace bowler.

Mosaddek Hossain has performed well in recent times as a finisher and can also bowl a few overs of spin. He scored 30* runs and took one scalp in the last match.

Skipper Rashid Khan is a top-class T20I bowler and can also be handy with the bat. He took two wicket-haul yesterday.

Mustafizur Rahman took a plethora of wickets in WC’19 and will hope to continue his form in the tri-series. He is a must pick in BAN vs AFG Dream11 team.

M Saifuddin is a wicket-taking pacer and can also be handy with the bat. He took one scalp in the last match.

Left-arm pacer Fareed Malik took two scalps yesterday and can be a good pick in BAN vs AFGH Dream11 team.

Mujeeb is an excellent spin bowler and will bowl mostly in initial overs. He failed with the ball in the last match.

Taijul Islam is a useful spinner and took one scalp in the last match.

Karim Janat is a good pace all-rounder. He took one scalp in the last match.

If you liked Afghanistan versus Bangladesh Dream11 Prediction, then follow us on Twitter for Dream11 Team and Fantasy Cricket Tips. You can also find us on Facebook.