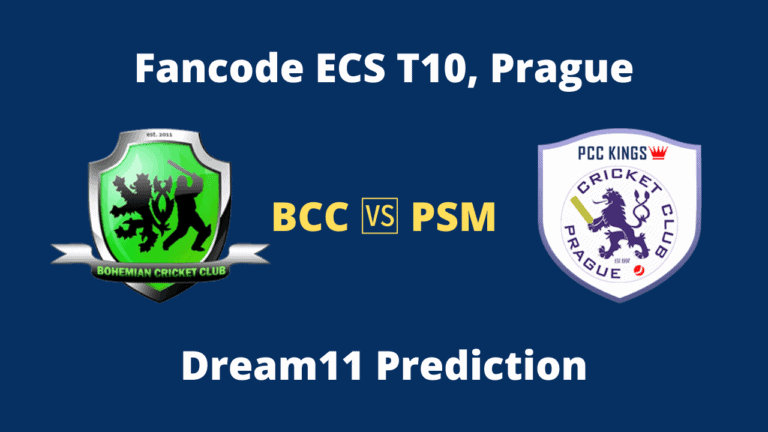 Bohemia CC and Prague Spartans Mobilizers will play against each other in the 33rd match of ECS T10 2021 at Vinor Cricket Ground, Prague. We will cover BCC vs PSM Dream11 Prediction, Probable Playing XI, and Fantasy Cricket Tips of ECS T10 2021.

Both the teams Prague Spartans Mobilizers and Bohemian CC have played 6 games in the tournament so far. Both the teams have performed average in the league so far.

The last time when these two teams played against each other, Mobilizers won the game comfortably by seven wickets while chasing a low total of 73 runs. Their skipper Suresh Kuramboyia was excellent with the ball for them as he picked up 2 crucial wickets in his spell however, the Mobilizers lost their last games against Vinohrady CC by a huge margin of 58 runs.

They were completely outplayed by the opposition in the last game and would look to change their fortunes in this game. Ashok Kumar Reddy will be their crucial player going into the match he is expected to bowl his 2 overs in the match and will also bat in the top order for his team. He has picked up 4 wickets in the tournament so far.

After losing their last two games, Bohemian CC would also look to change their fortunes in this game and move up in the points table. Javed Iqbal will be their key performer in this game. He opened the innings for his team in the last game and scored 24 runs.

Ali Waqar is again another crucial player for the team who will bowl his 2 overs and can also score handy runs with the bat. He picked up 1 wicket in the last game in his 2 over spell in the last game. Saurabh Kakaria will be their key pacer as he has performed brilliantly with the bowl in the tournament so far and also the leading wicket-taker for his team by picking up 9 wickets in the league so far.

The pitch report is not much relevant in ECS T10 matches as they play on concrete or green mat which has even pace and bounce throughout the game. The pitches are generally made in favor of the batsmen as the bowl comes nicely onto the bat but bowlers are also taking wickets because batsmen are not good.

It has been seen that 7 out of the last 10 games played on these pitches have been won by the team batting first. Anything around 90-100 will be considered a good total on the ground.

The weather in Prague is expected to be clear, with no chance of rain during the match.

If we get any news, we will update here.

(The changes in the playing XI in ECS T10 cannot be predicted and any important player can be out from the playing XI and also the batting order is not fixed).

He is the captain of the side and is expected to ball 2 overs with the ball. He opened in the last match and scored 24 runs but went wicketless with the ball.Javed Iqbal is very good captain choice in BCC vs PSM Dream11 Team Prediction.

Saurabh Kakaria will lead the pace attack for his team. He is the highest wicket-taker for his team in the tournament so far. He went wicketless in the last game.

Ali Waqar will be a crucial player for his team. He will bowl in the middle overs and is also expected to bat in the middle order or top order for the team. He picked up 1 wicket in the last game.

He is the highest run-scorer for his team in the tournament so far. He is expected to open the innings for his team. He managed to score just 5 runs in the last game.

He is again a crucial bowler from the team and will also bat in the middle order. He has picked up 2 wickets in the tournament so far. He will be a good pick for the grand league. He went wicketless in the last game.

Mahmood will bat in the middle order for the team or can also be promoted up the order in this game. He went for a duck in the last game.

He is another good bowler from the team who will bowl in the middle overs. He picked up 1 wicket in the last game.

He is the captain of the side and will bowl his 2 overs in the death. He also opened the innings in the last game but was out for a duck. He has picked up 4 wickets in the tournament so far.

Naukudhar is the highest run-scorer for his team in the tournament so far. Unfortunately, he was run out for a duck in the last game.

AL Mahmud is again a crucial player for the team. He will bowl with the new ball in the powerplay. He has picked up 4 wickets in his 5 games.

Ramachandran is the highest wicket taker for his team. He is expected to bowl his quota of 2 overs in the death. He did not play the last match.

He was brilliant in their last H2H encounter as he bowled a maiden over and also picked up a wicket. He will bowl in the powerplay. He went wicketless in his last game.

Reddy played in the first games and was brilliant with the bowl as he picked up 4 wickets in his 2 games. He is a must-have pick if he plays.

He is expected to do the finishing duties for the team with the bat and can also bowl an over or 2 in the middle overs. He scored 28 runs in the H2H match against Bohemian CC.