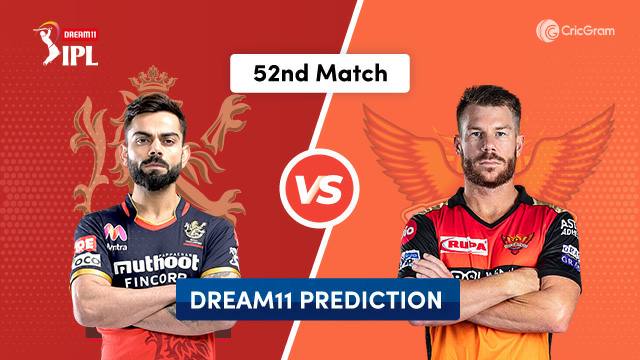 RCB has also performed decently so far in this season as they are currently at the 2nd position on the points table with seven wins and five losses and a total of 14 points.

The Royal Challengers made quite a few changes in the last match by trying Josh Philippe as an opener in Aaron Finch, who has struggled very much this season. Philippe played decently and gave a good start for RCB in the last match.

Devdutt Padikkal also played well batting at a good pace and was the star of the innings. In the last two matches, Virat and ABD have batted quite slowly in the middle overs, putting pressure on the lower-order batsmen.

Gurkeerat Singh has been playing decently but has not been able to play the big shots. Shivam Dube and Washington Sundar have not been up to the mark but have performed well with the bat. Except for one match, Chris Morris has also not delivered with the bat but has been the star bowler for RCB so far this season.

Yuzvendra Chahal has been the consistent wicket for the team in the middle overs. Mohammad Siraj has also appeared to be in the right touch and has picked up wickets this season. The other bowler Navdeep Saini has even been bowling at a perfect pace but has consistently failed to pick up wickets.

RCB has now lost two matches in a row, and if they keep performing this way, then there is also a chance that they might get eliminated from the race for playoffs.

Sunrisers are having a tough time this season as they are currently at the 6th position on the points table with five wins and seven losses, and 10 points.

They played brilliantly in the last match and won clinically against a top team like DC. Warner played with the same old aggression as he used to play in the previous seasons, and he was accompanied by Wriddhiman Saha, who batted even better than his partner.

Manish Pandey at No.3 has played a couple of match-winning knocks, and in the middle-order, Kane Williamson has been a massive advantage for SRH. Other batsmen like Vijay Shankar and Abdul Samad have also looked in the right touch, but there is still a lot of inexperience in the team’s middle-order.

The inclusion of Jason Holder has been a plus for SRH as he is bowling very well and picking up wickets, but he cannot score runs. The world’s current best leg-spinner looks in tremendous form as he bowled IPL’s best figures in the last match.

Even though the pace bowling attack lacks a genuine raw-paced bowler in their unit, they still have outstanding bowlers. Natarajan has gone for quite a few runs in recent matches, and Sandeep Sharma struggles a little to pick up wickets consistently. The third pace bowler has been the main concern for SRH as Bhuvi is not playing due to injury.

Sunrisers have performed brilliantly in the last match, and they need to complete the same way to qualify for playoffs.

Average 1st Innings Score: 187 (From 10 matches played at this venue so far in this season)

Average 2nd Innings Score: 169 (From 10 matches played at this venue so far in this season)

The pitch here is considered perfect for batting due to short boundaries, and we have seen some high scoring games here. But from the past couple of matches, it has appeared that the pitch has slow down very much, and it is not that easy to score runs here.

Five of the ten matches have been won by the team batting first at this venue.

One of the best batsmen in the world, skipper Virat will be playing at NO.3 for RCB. He is the highest run-getter so far in the history of IPL and has five centuries to his name. Kohli scored only 9 runs from 13 balls in the last match. He is a very good Captain choice in BLR vs SRH Dream11 Team.

This 20-year-old left-handed batsman has got a lot of talent. Padikkal batted brilliantly, scoring 74 runs from 45 balls in the last match.

Mr.360, who can play shots to any corner of the ground and will be important in the middle order. AB scored only 15 runs in the last match.

He is an allrounder who is equally good with both bat and ball. Morris will play a crucial role in the lower middle order with the bat. He scored 4 runs and managed to pick up 1 wicket in the last match.

He is a right-arm leg-spin bowler. Chahal is an excellent bowler in the T20 format and troubles the batsmen with his wrong-uns. He bowled well in the last match, picking up two wickets.

He is a bowling allrounder and can play some big shots down the order. Sundar scored 10* runs and bowled well but went wicketless in the last match.

He is a right-arm fast bowler and has been bowling brilliantly this season. In the last match, Siraj bowled well, picking up two wickets.

He is a young right-handed batsman and opened the innings for RCB in the last match. Josh batted well, scoring 33 runs.

Finch is playing for RCB for the 1st time in IPL. He did not play the last match.

He is a right-arm fast bowler and made his debut last season. Saini has a lot of talent and can be a good pick for RCB. He did not play the last match.

He is a left-arm medium-fast bowler and is mostly known for his slower deliveries. Udana did not play in the last match.

He is a batting allrounder and can bowl a few overs of medium pace. Dube scored only two runs in the last match.

Skipper Warner is the first batsman to score fifty half-centuries in the history of IPL. He scored 66 runs from 34 balls in the last match.

He opens the innings for SRH along with Warner and made his debut last season. Bairstow did not play the previous match.

He generally bats in the middle order and is known for playing according to the match’s situation. Pandey scored 44 runs from 31 balls in the last game.

He is a right-arm leg spinner and is consistent in picking up wickets. Rashid is also very good at controlling the flow of runs. He bowled brilliantly, picking up three wickets for just seven runs in his four overs in the last match.

He is a right-handed batsman and is an outstanding batsman in the middle order. Williamson scored 11 runs in the last match.

He is a wicketkeeper-batsman and a decent striker of the ball. Saha batted brilliantly, scoring 87 runs from just 45 balls in the last match.

He is a bowling allrounder. Holder was expensive but managed to pick up a wicket in the last match.

He is a left-arm medium-fast bowler and is picking wickets consistently for SRH. In the last match, Natarajan bowled well, picking up two wickets.

He is a batting-allrounder and can bowl medium pace when required. Shankar bowled well, picking up a wicket in the last match.

He is a right-arm fast bowler and troubles the batsmen with his swing. Sandeep bowled well, picking up two wickets in the last match.