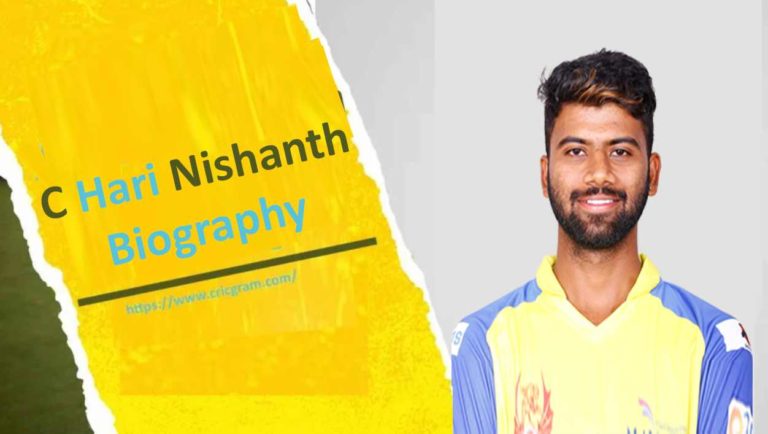 If you are also a fan of Hari Nishant, one of the emerging cricketers of Tamil Nadu, And if you are interested in knowing about their lives, then today’s article can be very useful for you because today we are going to know about C. In this article, Hari Nishant’s biography tells you how he started his cricket career and when he played his 1st First-Class Debut match.

So if you also want to know about some such interesting things about C. Hari Nishant’s life, then you can continue with this article and get information about many things related to Nishant’s life.

Before that, let me tell for your information that the father of C. Hari Nishant also wants to become a cricketer but, due to circumstances, could not fulfill this goal. And after that, he decided that he would make his son a cricketer, and that’s why his father started advising him to make his career in cricket from the beginning.

C Hari Nishanth Biography: Indian cricketer C. Hari Nishant, who played in the famous league such as IPL, was born on August 16, 1996, in the city of Otty, Tamil Nadu, And he is mainly known to play in First Class Cricket, Vijay Hazare Trophy, Ranji Trophy and IPL League. And he plays as a batsman. he is known for his heating batting, which is his identity in the cricket world.

At the same time, if talking about Hari Nishant’s family, in his family, apart from his parents, he has an elder sister, whose name is Mythreyi Niveditha. And any information about the name of Hari Nishanth’s parents has not yet been shared on social media or the internet.

Hari Nishanth’s Sister turned down her dream for Cricket

As you all know that there is a lot of money spent in completion of any one child’s dreams in any middle-class family, such a thing was also with the family of Hari Nishant, in which his sister turned down his dream for her little brother’s dreams.
And his sister’s name is Mythreyi Niveditha, who wants to become a doctor from the profession. Still, by looking at the poverty situation of his family, he left his dream and supported the family to fulfill his younger brother’s dream.

As I have told you how his sister left his dream to make him a cricketer, And along with this, their entire family came to Coimbatore, except for their ancestral place to make them a professional cricket player, so that their son Nishant could get training of professional cricket.

At the same time, if it is talked about the initial cricket career of Hari Nishant, he started batting at the age of 15, and Hari Nishanth’s first debut was done on February 21, 2019, through Sayed Mushtaq Ali Trophy in domestic cricket. And in September 2019, he got an opportunity to play in Vijay Hazare Trophy.

And Hari Nishant has played a total of 19 T20 matches in domestic cricket, in which he has scored more than 300 runs.

And apart from all these, he played very well in Tamil Nadu’s domestic cricket. And he was also part of the Tamil Nadu Cricket Premier League, and he was part of the Dindigul Dragons and VB Thiruvallur team.

Hari Nishant has started his First Class Cricket (Ranji Trophy) debut match against Madhya Pradesh on December 25, 2019, and in this match, he only scored 45 runs.

And after that, he came into the discussion when he got a chance to play Syed Mushtaq Ali Trophy again in the year 2020 and he scored 246 runs in a total of 8 matches, and he also scored 35 runs in the final match.

And due to his performance, Chennai Super Kings had bought them at their base price of 20 lakh in the world’s most famous league IPL in 2021.

Due to good performances in First Class Cricket and Syed Mushtaq Ali Trophy, Hari Nishant was kept in the Auction List of IPL 2021, and IPL’s biggest team Chennai Super Kings bought them at his base price of 20 lakh. And thus, he started his IPL career in the year 2021.
, But in the IPL of 2021, he did not get a chance to play in many matches, and Nishant could not show the performance of his batting.

But in the year 2022, the same team has bought again on their base price and now it is to see how much they get the chance to play.

Ans: Hari Nishanth plays as a Batsman in First Class Cricket, And besides that, they are known for their heating abilities.

Q. What is the name of Hari Nishanth Sister?

Ans: His elder sister has played an important role in the cricket career of Hari Nishanth and to make a cricketer to her younger brother, you turned down the doctor’s dream, and her name is Maitrei Nivedita.

Ans: C. Hari Nishanth has start his IPL debut career with Chennai Super King in 2021, but he did not get the chance to play more IPL matches this year.

Q. What is the name of C Hari Nishanth’s wife & girlfriends?

Ans: Any information about C Hari Nishanth’s wife and girlfriends has not been shared anywhere on social media.

Ans: C. Hari Nishanth is born on August 16, 1996, in Ooty City of Udagamandalam district of Tamil Nadu, and is now 26 years old.

I hope that after reading this post, you have got all the information about the life of C Hari Nishanth and from their first-class cricket to IPL.
To read about the life introduction of such new-Indian cricket players, you can follow us on the official telegram channel “CricGram“.

And do not forget to enter your comment in the comment box below for any other suggestions or your feedback.