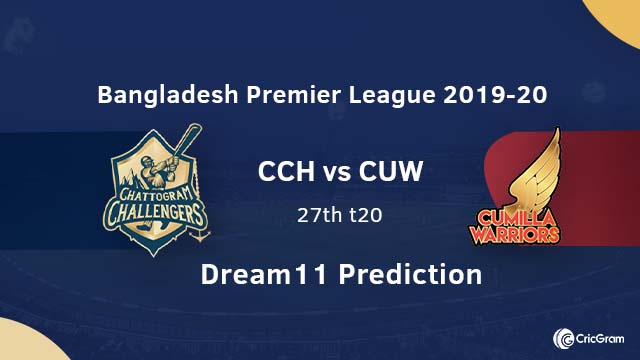 Table-toppers Challengers have rightly challenged every team this season winning six of their eight encounters. In the last match, They defeated Dhaka Platoon by 6 wickets.

Bowling first, All the bowlers bowled well to restrict Platoon at 124 with Muktar Ali and Ryan Burl taking two scalps each. Chasing the target, Skipper Kayes remained undefeated on 54* runs while Chadwick Walton scored quick cameo of 25 runs to chase the target comfortably. They will hope to continue the winning momentum ahead and outplay Warriors tomorrow.

They are fifth on the points table with only two wins in seven matches and need to put their best effort into the remaining games to stay alive in the competition.

They lost their last match to Rajshahi Royals by 15 runs. Bowling first, Spin duo of Mujeeb and Sunzamul along with Soumya bowled well in an otherwise poor bowling effort to restrict Royals at 190. With the bat, Soumya Sarkar played an attacking knock of 88 runs from 48 balls but was not enough to chase the target and were left behind by 15 runs.

A neutral track awaits both teams with excellent support to batsmen as well as bowlers.

Pacers from first half and spinners from second innings can fetch many points in your fantasy team.

Chasing team will have the edge over the team batting first.

Chadwick Walton: He is an attacking batsman and has scored 240 runs in seven matches at an average of 60.

Mehedi Hasan Rana: Pacer Rana is the leading wicket-taker of BPL’19-20 till now with 13 scalps in six encounters. He should be a must-pick in CCH vs CUW Dream11 team.

Lendl Simmons: Experienced Simmons can be a match-winner on his day but has failed to perform till now in this season.

Imrul Kayes: Skipper is in right touch in this season with 289 runs in eight encounters including 54* runs in the last match.

Rubel Hossain: He is a lethal pacer and has performed well taking eight scalps including two wicket-haul in second last match.

Liam Plunkett: This English Pacer has plenty of variations and should be a part of your fantasy team if he plays tomorrow.

Avishka Fernando: Opener Fernando is an attacking performer and has been in good form in the international arena. He has scored 221 runs in six matches including 72 runs in the last game he played.

Soumya Sarkar: He will bat in the middle order and also bowl a few overs of medium-pace. He has taken nine scalps in seven matches and also scored attacking 88* runs knock in the last game.

Mujeeb Ur Rahman: Afghan spin master Mujeeb has taken nine scalps in seven matches and is looking in good form. He can be a good pick in CCH vs CUW Dream11 team.

David Wiese: Kolpak all-rounder Wiese is in excellent form recently and can be the best choice for captain in grand leagues tomorrow.

Bhanuka Rajapaksa: Sri Lankan batsmen Rajapaksa is a talented player and can play a good inning. He has scored 188 runs in six matches at an average of 37.66 and can play tomorrow.

Dasun Shanaka: Skipper Shanaka can play attacking cameos along with part-time medium pace. He has scored 135 runs till now at a strike rate over 185 and can return in the XI tomorrow.

Al-Amin Hossain: Pace bowler Al-Amin is a consistent performer with the ball and has taken seven scalps till now. However, He failed to perform in the last match.


The final team will be updated on Cricgram Telegram ⇒ Subscribe Now

If you liked Chattogram Challengers versus Cumilla Warriors Dream11 Prediction, then follow us on Twitter for Dream11 Team and Fantasy Cricket Tips. You can also find us on Facebook.