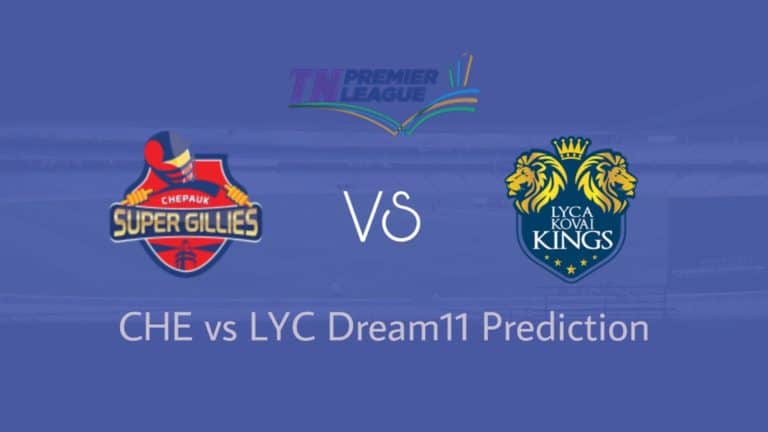 Chepauk Super Gillies and Lyca Kovai Kings will face-off in the 13th encounter of Tamil Nadu Premier League 2019 at Tirunelveli. We will provide CHE vs LYC Dream11 Team Prediction, Preview and Probable Playing XI for the match.

Chepauk Super Gillies are second on the points table with two wins and one loss. They won their last match against Karaikudi Kaalai by 54 runs. Batting first, the Opening duo of Gopinath and Raju scored good knocks of 55 and 54 to take the team to a total of 175. Also, K Gandhi scored 32 runs. With the ball, G Periyaswamy bowled brilliantly taking two scalps on the expense of nine runs and was supported by other bowlers to ensure a 54-run win for the side. They will target the top position in the points table, defeating Kings.

Lyca Kovai Kings are just below Chepauk in the points table with similar two wins and one loss. They defeated Ruby Trichy Warriors by 26 runs yesterday. Batting first, P Ranjan Paul and M Rangarajan scored 34 and 22 after the early dismissal of star openers. Later, Antony Dhas and Akkil Srinaath played attacking cameos of 32* and 36* to take the team to a total of 161. In defense, T Natarajan bowled lethal spell taking four wicket-haul while K Vignesh took two scalps to defend the target successfully by 26 runs. They will hope to continue the winning momentum and defeat strong Chepauk team.

Pitch will support spinners more, and batsmen once set can score a good knock.

They can shuffle the batting order.

Pradosh Ranjan Paul will bat at one down and has enough potential to play a good knock. He scored 34 runs in the last match.

A Aarif got a good start in the opening encounter and will be eager to play a good knock tomorrow. His position can change as per match situation.

Skipper Abhinav Mukund is an experienced campaigner and will be the essential batsmen for Kings. He scored 70* runs from 44 balls in the first encounter but failed in the last two matches.

Skipper Kaushik Gandhi will lead the Chepauk Batting unit from the front. He is a technically strong batsman and is the second-highest run-scorer in TNPL history. Kaushik failed in the first two matches but scored 32 runs in last game.

Shahrukh Khan is also a brilliant player and will do the majority of scoring for his team. He scored 325 runs in TNPL’18 and continued his form scoring 40 runs in the opening match. He failed in the last two games.

K Gopinath was the highest scorer for the team last year and will be eager to score plenty of runs this season too. He will open the innings and scored 37, 55 in previous two matches.

Ganga Sridhar Raju will open the innings for Chepauk. He scored 26 and 54 runs in last two matches.

B Anirudh Sita Ram is a technically strong batsman and will be eager to perform well for his new side. He has failed to make a mark in three matches.

Akkil Srinaath will bat in the middle order for Kings and is a technically strong batsman. He scored 36* runs in the last match.

U Sasidev is an average batsman and can be demoted or promoted as per the need of a match. He can be risky for tomorrow’s encounter.

Murugan Ashwin is a good allrounder. He is a witty leg spinner too and has played in IPL also. He has scored 38 runs till now in TNPL 2019 and has taken three scalps till now.

A Dhas is a good pacer and can do some late hitting for his team. He scored attacking 63 and 32 and also took four scalps in last two encounters.

S Harish Kumar took seven scalps in last season and can also score at a reasonable strike rate with the bat. He scored attacking 39 runs in the second previous match.

M Rangarajan has enough potential with bat and bowl. He has played for Tamil Nadu team also. In the previous game, M Rangarajan scored 22 runs and took one scalp.

D Rahul bowled well in last two encounters and can also do decent hitting in death overs. He is a good pick for Fantasy Cricket grand leagues.

R Alexander is a brilliant spinner and proved it by taking three and four scalps in the first two encounters. He will be a must-pick in LYC vs CHE Dream11 team.

T Natarajan is a lethal pacer and took six scalps in three matches including four wicket-haul yesterday. He will spearhead the pace attack for Kovai Kings.

G Periswamy bowled a good spell in all the matches. He took four scalps in the last two encounters.

S Manigandan is a brilliant leg-spinner and gave a glimpse of his talent, taking three wicket-haul in their opening encounter.

K Vignesh also took eleven scalps in last season and is a good pacer of Kovai Kings. He bowled well in all the three matches and has made five scalps till now.

M Siddharth can be a good allrounder. He will bowl four overs of spin and can also be handy with the bat.

S Ajith Ram is a competent spinner but has failed to make a mark in TNPL 2019. He can be slightly risky too.

If you liked Chepauk Super Gillies vs Lyca Kovai Kings Dream11 Prediction, Then follow us on Twitter for Dream11 Team and Fantasy Cricket Tips.